When is a Club Sandwich not a Club Sandwich? When it is a double decker. A Double Decker is so called because each layer of filling forms a deck, much like a double decker London bus. A club sandwich on the other hand is double-decker with two layers of fillings between three slices of toasted bread. Traditionally the club ingredients are chicken, bacon, egg, lettuce and mayonnaise AND toasted. Or did I miss something?

I love a good club sandwich, and to be honest I am not too discouraged by a bad club sandwich. For 3 months in India myself and a work colleage consumed a fair few as it seemed to be the one western style item that most Indian chefs in the hotels could muster up. I think that they must have been in training in London where they went to Club Sandwich Culinary School. On many a late night having rung room service to order two club sandwiches and four diet cokes to room 223 we debated a website devoted to the search for the ultimate and not so ultimate club sandwich. In fact that was the inspiration for myfoodhunt.com which is still in its infancy.

So back in the UK when we met up to discuss blogging and writing, conversation turned back to Club Sandwiches, So Kristian I ask you, it should be toasted yes? 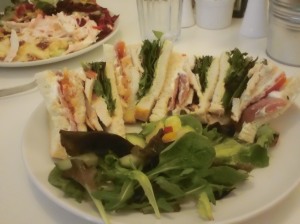 In Loughborough at “Wests” I ordered the special off the board, a Club Sandwich of chicken, bacon, tomato, lettuce (or greens as they listed) and mayo. Imagine to my surprise when an untoasted or ‘raw’ sandwich arrived , a double decker not a club. I was not sure, was I wrong, why was it not toasted, did I imagine that it should be?

Despite all that it was a really good ‘double-decker’, nice soft ‘cheap white’ bread, dripping with mayo, chunky chicken bits, and some peppery rocket. I has no complaints except that it wasn’t a club sandwich. But the positives? I got to question the whole club sandwich definition, and will probably spend an evening down the pub next week discussing this with Kris of famouscfc.com 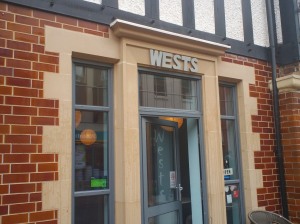 I suggest that if you want a club sandwich ask for a toasted one.