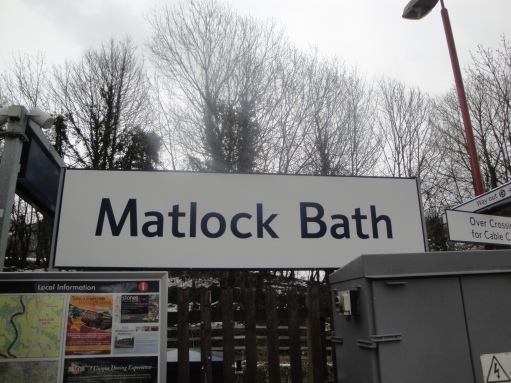 Over many bank holiday weekends we have driven through Matlock Bath and seen the hoards of bikers parked up outside one or more of its many Fish and Chip shops. I have often been tempted to stop and join in, but there has never been anywhere to park.  So this last Easter weekend we decided to follow the route of all those old Victorian travellers to the spa town and make our way here by railway. Much easier!

If you have never been to Matlock Bath then I can best describe it to you as almost like a seaside promenade by the river. The main road through it, is lined with Fish and Chip shops, ice cream parlours, B&B’s and small hotels, together with an assortment of gift and craft shops. There are people strolling up and down, a mix of  leather clad bikers and young families with prams, on occasion both. 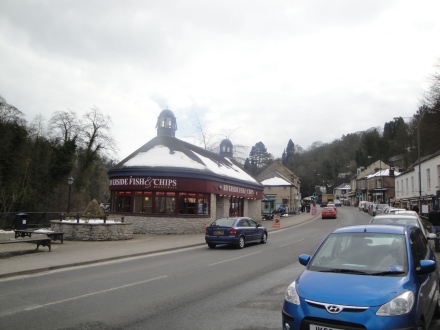 The only things missing from the sea front experience is the smell or taste of salt spray in the air, the squawk of sea gulls and the sand in your ice cream or sandwiches. There probably are still quite a lot of those ‘land’ gulls swooping around, the sort that moved to the country from the coast to get up the pecking order and in search of a better standard of crust. ‘Rats with wings’ I believe is one of the more common and less endearing terms. 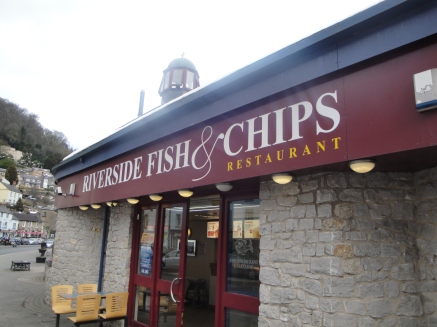 When you walk along the promenade you are greeted by an almost ridiculous number of Fish and Chip shops. Not including the different pubs and hotels that had boards advertising the dish, we must have counted 9-10 just selling portions of Fish and Chips. In the end though as it was a bit chilly (well lets call it like it was, it was freezing) we chose the place that had the most seats inside.

That turned out to be the Riverside Fish and Chips restaurant which is on the river side of the road. It had places outside to sit, but most of those were still covered with small piles of ice and snow. It probably was not the most traditional, famous, best of those on offer, but as I said it was inside and warm. 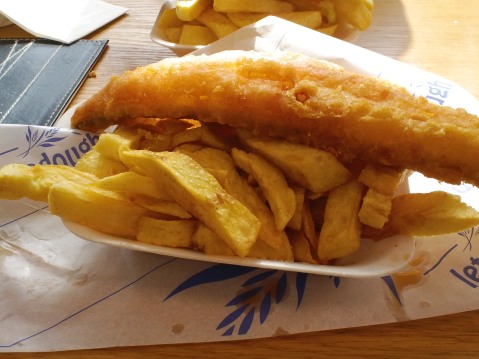 I was not expecting too much so I just got a tray of haddock and chips which was £5.50. The fish was a bit thin and the batter was a bit crispy not dry but a bit too chewy for my tastes. The fish that was inside was actually OK there were nice soft and juicy flakes of haddock which I enjoyed, the only thing was that there was not too much of them and the ends of the fish was just a chewy crispy bite. Having said all of that, it was proper fish and not a frozen fillet. The chips were not too bad either although I did soak mine with vinegar, not always recommended but I quite like the smell of wet tramp in the morning. Well I don’t really but I suspect that is one some people may think of us vinegar dousing fools as they deem us. If I was here again on a warmer day I might try one of the other chip shops, but I don’t think that you would go that far wrong which ever one you choose.

The Riverside Fish and Chip shop is at 196 South Parade, Matlock Bath, it is about 10 minutes walk up the promenade from the Matlock Bath train station and on the main road that you drive through. You cannot miss it, and you cannot miss any of the other fish and chip options, the chances are that you may struggle to park at the weekends.