I developed a real love for Mac N Cheese while I was living over in the States. Not quite an obsessive love, but the sort that prevents the ability to walk past a stall selling the stuff when I have reached that point where I am way past full already. Obsession or Gluttony? Probably both but I refuse counseling! 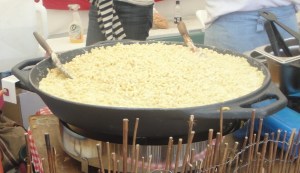 In amongst a whole strip of street food purveyors on the Southbank of the Thames I stumbled across Anna Mae selling her Mac N Cheese. The food is described as “Southern-style Mac N Cheese”. There were plenty of good options on the board but I went simple to test out the base product and ordered a bowl of “The Annie Mac” which is described as ‘our classic – elbow macaroni in a three cheese sauce’. To be honest I only wanted a small bowl, but they only had one size which was a big pot for £5.

It was a good creamy bowlful, the elbow macaroni (almost too soft) was mixed with three cheeses; Sharp Cheddar, Monterey Jack and Mozzarella. The cheese flavor was well developed with a creaminess on the first mouthful then a good sharp tang as you dug deeper into the pot. You know really we were so full I had only really bought this expecting to eat about a third but it was so good that we almost managed to get to the bottom of the pot. It was a good honest Mac N Cheese rendition pretty close to the stuff I got in the States and judging by the state of that pot when I walked back past the stall later it seemed that the masses on the Southbank agreed with me.

I was lucky enough to chance upon Anna Mae on the Southbank, but you can follow her on Twitter and Check them on Facebook to locate them on a particular day