When it comes to buying cookbooks I have a somewhat expensive habit of purchasing them based on a single picture or recipe that I see as I am flicking through the pages. This was the case when I found myself in possession of a copy of The Exotic Meat Cookbook by Jeanette Edgar and Rachel Godwin. I had been making a number of goat recipes and I picked up this book for the Spice Goat Casserole recipe.

For the first attempt though from the book I found myself making a stew or perhaps it was a casserole of Camel and Chorizo, with Butter Beans and Red wine.

I was rather pleased with the way in which the first attempt from the cookbook turned out. It was a pretty hearty affair, full of chunks of Camel leg and Chorizo sausage. But there was a little matter of cooking it all before we ate, so what was involved?

I suppose the trickiest part of the whole recipe was getting my hands on some camel meat? Luckily I knew a man, or rather a shop where I knew I would be able to pick a pack up. This was the original Farmers Market Shop at 3 Market Street in Bakewell, Derbyshire.

It is not the only unusual cut of meat that they sell, outside there seems to be a large chalkboard listing exotic meats that regular frequents the same square yard of the pavement. 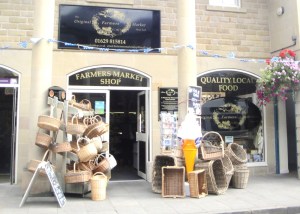 Some of the meats listed such as Venison, Ostrich, and Buffalo are pretty much common place these days almost to be considered ‘de rigeur’. Others like Zebra, Alpaca, and Camel still retain an air of mystique to the average everyday cook.

I don’t want to repeat the exact recipe as I think that is never that fair to the author.

First off we dipped the chopped camel leg into some plain flour mixed with a liberal dose of salt and pepper. 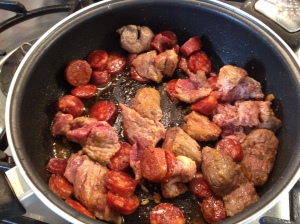 You then take the meat(s) out of the pan and set aside using the pan juices for the next stage.

You then just basically add some finely chopped red onion and garlic to the chorizo juice, cook slowly, add some red wine, and cook the alcohol out. Then its just a case of chucking the meat and sausage back in and adding some stock, I used beef as I didn’t have any camel stock

Then just let the whole pan cook slowly away for 2-3 hours until the camel meat softens and starts to fall apart.

It sounded complicated from the name of the recipe, but really it is pretty easy, just a bit of chopping, a little bit or stirring and a few hours of hanging around.

Oh and it was also a very tasty dish, a fantastic rich sauce that was very drinkable on its own. The camel meat was, well it was interesting, I am not sure what it brought to the party, it was a bit like signing an expensive overseas striker for the sake of it, when you have some young guns sitting in the background waiting for a chance to shine. Iin this case I would be tempted to try this dish with some pork instead.