I love a good potsticker but I had never tried to cook them myself so this week when the desire to consume a large plateful became all too much I just had to make the effort to produce a panful. So where did the inspiration come from? It came from two places first from the dual language Chinese and English cookbook by food blogger Christine Ho ” 簡易食譜──精選．易學．經典》Easy Recipes－A Selection of Simple Classics” check the blog out at Christine’s Recipes . I picked up the book while waiting to board a flight at Hong Kong airport, it was number 4 in the bestsellers list that day. The second point of inspiration was from the Good Food Magazine which had a recipe from Saturday Kitchen Bites  for Chinese Pork Pot-sticker Dumplings by Ken Hom  also linked through the BBC Food Website. 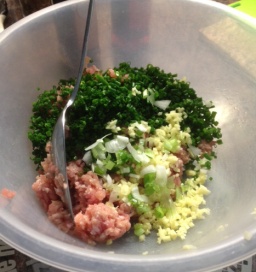 The recipe we ended up using was as follows 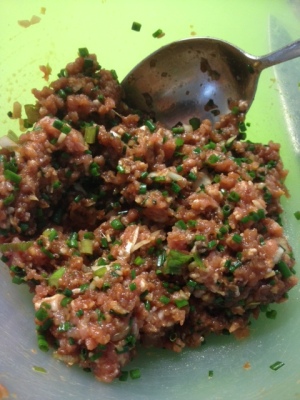 The filling was pretty straight-forwards, just a case of mixing all the listed ingredients in a bowl. Even before it was put into the pot-sticker dumpling wrappers it was starting to smell pretty good.

Making up the Potstickers was perhaps the trickiest part, and only because it was too tempting to try and stuff too much filling into each one. Through some trial and error, or perhaps by actually paying attention to the recipe directions we managed to make about a dozen. The trick was to just put 1 heaped teaspoon of mix into the middle of the dumpling wrapper. To fold them up it was just a case of wetting the edges with water and then folding them in on themselves to seal the dumpling. You could have been clever and done some fancy crimping action, but to be honest we were adopting the simple method of not having any holes through which the mix could leak out

To cook them, we followed Ken’s advice, using a large lidded frying non-stick pan, putting on the gas ring until it was very hot. We added the oil and the placed all the dumplings flat-side down into the pan. They started to brown and crisp slowly on the bottom, and the trick is not to turn them over (even though that was tempting) and just cook on the one side. You then need to reduce the heat and cook for about another two to three minutes until the dumplings are lightly browned on the base touching the pan.

Then this was the stage that I was amazed worked and really made them authentic. You add about 75ml of water, and then cover the pan tightly and simmer gently for about 12 minutes or until most of the liquid is absorbed.  So they sort of steam at the same time as crisping up, ingenious.

After that you uncover the pan and continue to cook for a further two minutes as all the liquid disapears. 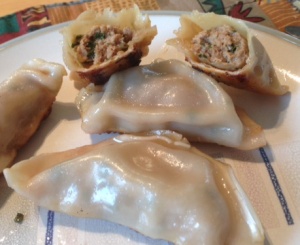 I was really very happy with the results. They were just like the potstickers I have had out in resturants in China and in Chinatown. They really reminded me of the ones I crave from the Excellent Dumpling House in New York. If I am honest and only slightly boastful I believe that these might even have been better! Not only is the filling packed with flavours but the dumpling case had everything that you needed and wanted. A crisp slightly caramelised base, with a soft lightly doughy almost silken wrapper on the top.  All you need to make this perfection in itself is to select or choose the right dipping sauces. For me I am happy with just a little bit of soy or a bit of Chinese vinegar, but I know some of you like it a little more spicy.

If you have ever thought that Potstickers were difficult to make, well let me assure you that it was really easy, and I reckon these would make a really impressive little starter or snack if you have people over for dinner or just round watching the game.

Give it a go honestly it is so worth it and so simple too.