Sweet cheeks Q near Fenway Park is another Southern Style restaurant that I sought out on my trip to Boston.

Firstly because I am a total sucker for any kind of good BBQ. This place I was told had a pretty great menu with all the classic meats and sides that I was dreaming of from the other side of the pond.

Secondly because I learned that it was the home of Top Chef alumni Tiffani Faison!

This lady was on season one and did herself proud as runner up (we loved her) and then also took part in Top Chef All-stars where she was just as much fun to watch getting so close to the Final reaching the last four!

I love Top Chef on Bravo and I love BBQ 🙂

I was staying nearby at The Commonwealth Hotel just by the Kenmore Stop on the green line.

I found myself coming here to eat BBQ for breakfast at erm about 1pm in the afternoon.

I really wanted to taste more than one of the meats on offer at SweetCheeks Q so I decided to opt for the Big Cheeks Tray which was a choice of 2 meats and a choice of two side, one hot and one cold for $24.

I was tempted to just pay that extra $2 to get the Fat Cheeks Tray which came with a choice of 3 meats, but I figured I was already being a bit of a greedy pig getting the 2 meat combo 🙂

My Meats of choice on my ‘Big Cheeks Tray was the Beef Brisket and the Pork Belly. These are two of my most loved BBQ plate options so I was really excited to try them both.

The Pork Belly was awesome, some nice crisp edge bits on the fat, but mostly it was soft and juicy. Some people don’t like the fat, but I love it like this! soft and white and basically unctuous! The pork meat itself was falling apart and I could probably have been able to eat this without any teeth as it just fell apart in your mouth.

The Brisket also seemed a little fatty in places, but as I said I like it like that and it is better than it being dry and overcooked. I felt that the beast this came from must have had a good life as the marbling in the meat was evident with glistening silky fat spidering away in between the dark and tasty meaty beef. 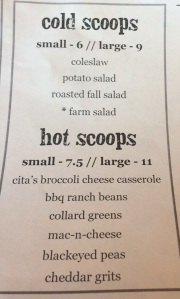 For my choice of sides at SweetCheeks Q I picked two of my go to staples just to make sure that I have all my faves on that tray to make my day complete. I admit that it was a plate of safe choices!

The Mac n Cheese was good but it came in a metal mug and I felt that as I ate further into the vessel that it got thicker and more claggy.

At the top and when it first arrived it was super with lots of sauce mixed into that pasta. I think it kept cooking though so got less ‘saucy’. It did have good flavour and I really did like it, but I think can cook better at home, I am pretty fussy. OMG sorry Tiffani, if I ever get to come back I’d cook you mine, and you can tell me I am wrong Top Chef judge style 🙂

The Potato Salad was excellent and at least an equal to many potato salad that I have eaten in the South. I would like to be able to make one as good. I really loved the red potato chunks that were like new potato bites, and the mayo dressing was just creamy enough to delight and tangy enough to be really interesting and something to come back again and again for.

I did also like the ‘pickles and onions’ that came with the tray, they added a little and much needed acidity to counter that rich fattiness of the meat on the tray. I am not usually a fan of the pickle but these ones really worked out for me, I also felt that they would be a great addition to a BBQ sandwich #they probably do 🙂 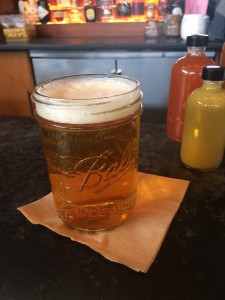 Just to keep it really local I had a great beer from the most excellent local Night Shift brewery based over in Everett just near to the Wellington stop on the Orange Line. This particular beauty was one of their hoppy IPA’s.

I kind of was in love with this place from the start and wish I was in Boston more often so that I could try some more of their Food. I kind of know that I will be back some day 🙂

Check them out on their Facebook Page and on their Twitter Feed as well to see what is going on.