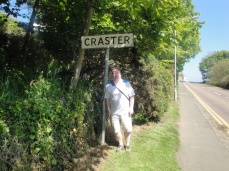 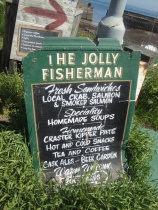 The last time I visited Craster in Northumberland I sat outside a cliff side pub watching the house martins fly from their nests drinking a pint of good local beer. Eighteen years later en route to St Andrews in Scotland I found myself stopping off for a spot of lunch at the same pub and was tempted by their locally sourced seafood options. The House Martins were still there nesting in the eaves of the pub, and the views of  Dunstanburgh Castle were much more spectacular than my memories.

The Jolly Fisherman is just across the road from Robson’s, producers of the famous Craster kipper. 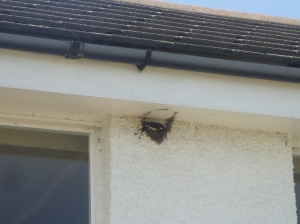 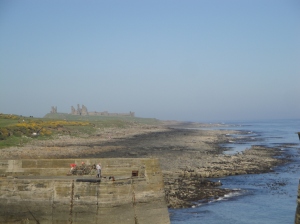 The food seemed to be more or less the same in terms of content but the presentation was more upmarket than I recalled, in common with many places the food came served on wooden boards and was probably priced a little higher than in a traditonal pub. We kept it local and went for the options of crab and kipper 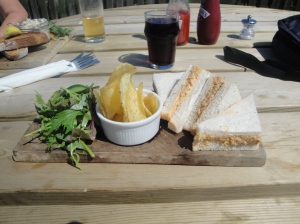 The Local Crab came in a Sandwich on plain white bread, it was simple but that was the best way to serve it so that you could really appreciate the quality of the crab meat. It was accompanied by a simple leaf salad primarily of rocket and some crisps. It was good but not as good as the kippers. 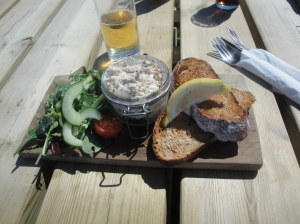 The Craster Kippers from over the road were transformed into a Homemade Craster Kipper Pâté (Made with the famous kippers, served with melba toast). The pâté was creamy and had a good strong kipper smoked flavour. The salad was a good side but on the whole the dish could have done with a bit more toast to go with the large pot of pâté.

Both were good and I was keen to get over the road to see the shop from which they were sourced. 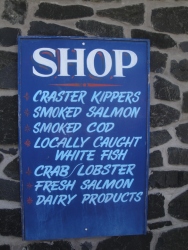 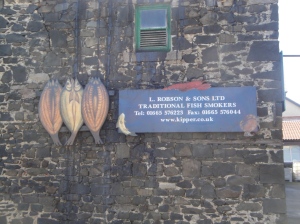 Inside it was all that you could ask for. Plenty of smoked kipper and a great smell, the sort of smell that was more like a flavour hanging in the air like an invisible smoke. 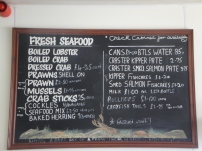 The kippers looked great, they were selling some as ‘seconds’ which was a curious term, they actually looked a lot tastier to me, so I dont know what was wrong with them or what defines a ‘second’ in the kipper world. Sadly we had no chance to buy any as we did not have access to a fridge for a few days. Although they  (Robsons) have a website where you can order all of their products online http://www.kipper.co.uk. I was glad that we had sampled at the pub as I doubt that I will be able to get a shipment back over to Chicago.

L Robson and Sons Ltd is a 4th generation family business, famous across the UK and the world for oak smoking kippers and salmon. They are in the heart of the tiny fishing village of Craster in Northumberland and have been there for over 130 years.

The Jolly Fisherman is located at Haven Hill, Craster, Alnwick in Northumberland