Atomic Burger in Oxford is one of two Atomic Burger joints, (the other one is in Bristol). On their home page they tell us that ‘Atomic burger might just be the best blinking burger joint you will ever visit’ so I suppose we should just give them a whirl then. The Oxford joint is on Cowley Road which was about a 10 minute walk away from the main bit of Oxford where all the tourist buses and guides were fighting for attention and business.

I guess that all those people were in town touring the colleges, I doubt that their browsing history was like mine which was something along the lines of “best burger in Oxford” or “Oxford burger”.

Whatever it was that I typed into my browser ‘Atomic Burger’ kept appearing, so it was almost inevitable that it was to be featuring in my life around lunchtime. 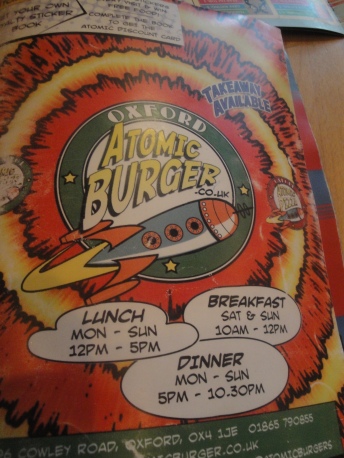 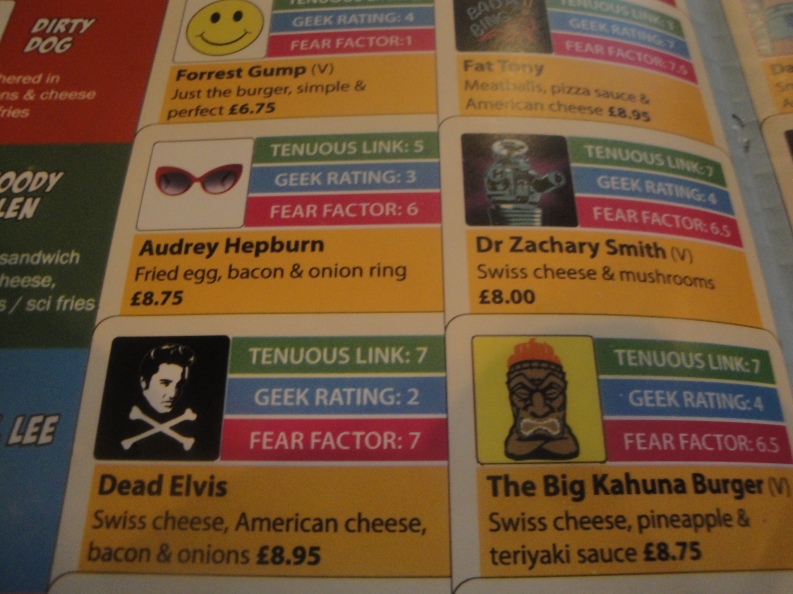 We squeezed ourselves into the last remaining table and settled down to peruse the menu. The first thing that I read made me very happy “Our burgers are cooked medium, a little bit pink“. Excellent news, that is how I like mine done so that they don’t dry out and so that I can still taste the meat. It is also a pretty good indicator that the patties are fresh and not frozen. Backed up by the next thing I read “All our burgers are hand formed by us to our mad scientist secret recipe”

I really wanted to take the menu home so that I could make the cover into a poster, but I resisted mild larceany and took a picture instead. All of the burgers have quite random names, usually when I have seen this before I can work out the link between the name and the burger combination. I couldn’t quite manage that here, and to be honest, I am sure that they were just messing with me so that I had to shout out across the table that “I wanted an Audrey Hepburn!” That was going to be a burger topped with a fried egg, bacon, and an onion ring.

My partner in ‘burger’ crime on this occasion was ordering up a ‘Dr Zachery Smith’ which was a burger topped with Swiss Cheese & mushrooms. I can see a tenuous link between the Swiss of the cheese name, and that of the character from Lost in Space or was it supposed to be the Swiss Family Robinson? “Does it matter? stop overthinking it” I cry out somewhere deep inside.

We ordered the burgers and settled down to wait hungrily 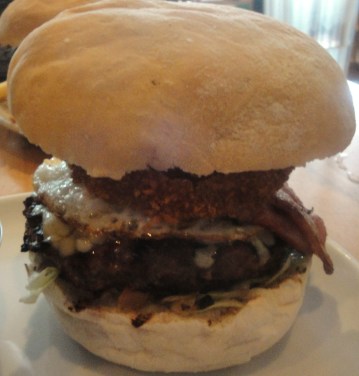 The ‘Audrey Hepburn’ burger, despite being unusually named, was topped with most of my favorite burger sandwich items, namely a fried egg, slices of bacon, and sliced fried onion.I just had to add some additional cheese to the standard offering to make sure that I was getting all 5 of my “burger 5 a day”. I tackled the burger head on (no cutting it in half for me) and grasped it firmly in both hands to take a bite. “Flavor-town!”

This was a good combination, but then again how can you go wrong with the all day breakfast combination of bacon and eggs on a burger. (Hold on a minute is that where the name connection comes from matching the breakfast content with one of Hepburn’s iconic films- ‘Breakfast at Tiffanys’? have I just been quite dim?). 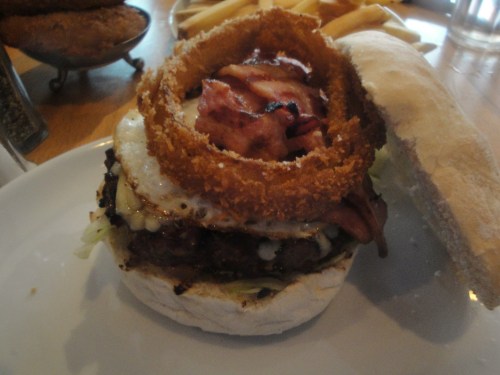 Back to the burger, the meat patty itself had a really good beefy, almost steak like, flavor and since it was cooked perfectly pink you still got some meat juice running into the burger sandwich to add more flavor. The texture of the crisp fried onion lying on top of the burger was a good contrast to the bite. The bacon was also nice and crisp and added a little bit of a salty taste to the party.

The fried egg added a creamy and soft dimension to the sandwich, it would have been perfect if the yolk had still been runny. I always love it when it is as you then get that rich creamy sauce oozing through the bun, but I suppose you cannot have everything.

There was a little bit of a surprise with a small veneer of lettuce, tomato and mayo layered onto the bottom slice of bun. They hadn’t been mentioned anywhere but they worked well, I do prefer it when burger salad component is restricted to a minor supporting role, something along the lines of the lettuce should be ‘seen and not heard’ it should not get in the way unless it is a BLT topped burger of course.

I guess I imagine that you are thinking I might have quite enjoyed this burger? Yep I did! 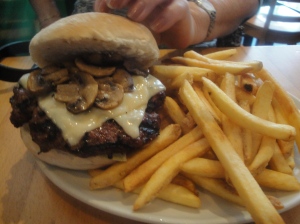 The other plateful that hit the table was the Zachary Smith burger which was topped with mushrooms and Swiss Cheese, so basically a Mushroom Swiss burger. I did not eat it but from where I was sitting, it looked to be just as tasty, and judging from the sighs of contentment from the other side of the table I believe that it was equally as appreciated. 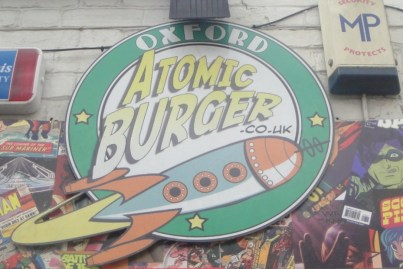 This was a very successful MyFoodHunt trip, I was glad that the food research of Oxford paid off and I now have another good UK based burger joint to add too the list of places worth visiting.

On the Atomic Burger website they make the somewhat bold statement “We don’t go on about them but trust us, once tried then you are gonna struggle to ever eat anyone elses.”.

You know what guys, you might just have been able to back that up.

The only thing is that I ain’t driving all the way down to Oxford whenever I need a burger in the UK so I will be eating someone elses, but rest assured I shall think fondly of your burger as I do so.