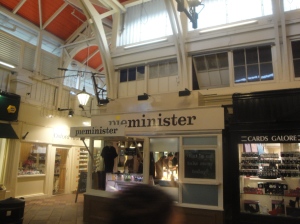 The Oxford Branch of Pieminister is located in amongst good foodie company inside the Covered Market in Oxford. There are not that many Pieminister locations, others are in Bristol, Stoke, London and in Amsterdam (surprising one that) but they do sell their pies to other outlets and pubs so you may get them elsewhere. This branch in the covered market was heaving on the Saturday lunchtime, in fact there was a queue out of the door waiting to get in. I looked through  the window at the plates of the lucky diners and could see that many of them were going for the full pie experience getting plates of pie, mash, and peas. I was almost tempted to stand in line to have “The Mothership” which is a pie with ‘mash, minted mushy peas, grated cheese, crispy shallots and gravy‘ for £7.95, but I had other plans so it was going to be takeaway pies for me on this occasion. 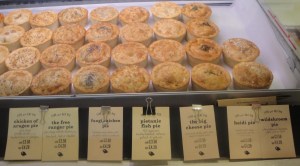 At the Takeaway counter you can see all of the pies in the Pieminister range. It was a little bit  too tempting and to be honest I would have liked to have reached in and had one of each. I have already had the ‘shamrock pie’, the ‘chicken of aragon pie’, and the ‘matador pie’ more details of those below. If I have the eating time and spare pie money I would also like to try the ‘big cheese pie’ with “West Country Cheddar, garlic cream & buttered onions” and the ‘deerstalker pie’ with “British venison, dry cured bacon with red wine and puy lentils”. Too much choice to be honest, but then again plenty of variety to make you come back time and time again. 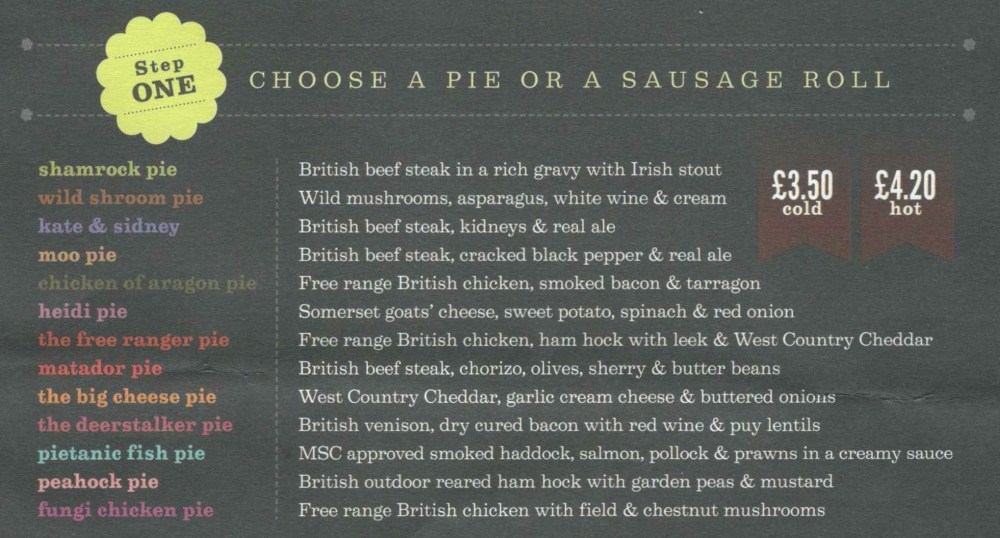 There are really too many pies to eat on one occasion, but luckily you can buy them and freeze them, and there are plenty of places across the country where you can buy them as well. In my current home town of Nottingham you can get them at the Canalhouse Bar on Canal Street. Just lookout for them as you wander about your own towns. 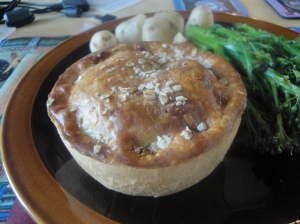 One of the pies that we brought back was the ‘Shamrock Pie’. This is a pie filled with “British beef steak in a rich gravy with Irish stout“, when you cut into it you can instantly see that deep dark rich gravy that is enveloping the soft yet thick chunks of beef. The pastry is pretty solid and a bit crunchy, but there was just about enough gravy to soak into the pastry casing. I did make a bit of extra gravy to go with the pie, and instead of the peas and mash sides that you can get if you choose to eat in the Pieminister restaurant, I added some new potatoes with butter and some purple sprouting broccoli. These pies are well worth getting hold of for an easy evening meal. 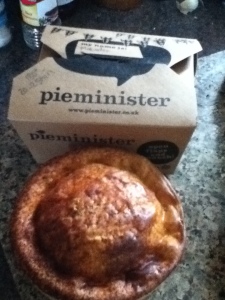 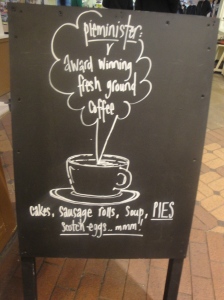 We also have bought a couple of the matador pies which have been eaten and are delicious. They contain “British beef steak, chorizo, olives, sherry & butter beans” many many of my favourite fillings. I make a mean chorizo and butter bean stew and I am sorely tempted now to try putting that into one of my own pie creations. Another pie that has been sampled in the MyFoodHunt household is the “Chicken of aragon pie”, this one has “Free range British chicken, smoked bacon & tarragon” and is also a dang good pie.

As I wrote earlier a lot of choices to be made in the Pieminister pie eating and buying world! This particular branch in Oxford was at the covered market 56-58. You can find the other locations on their website here.  You can also follow them on Twitter and find them on Facebook