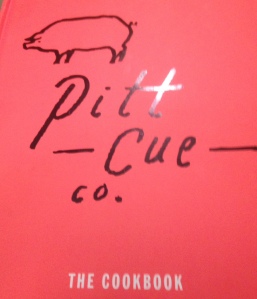 Pitt Cue Co in SoHo London have only been going for a couple of years and I managed to get my hands on a copy of their new cookbook recently and as per usual I spent quite a lot of time drooling over the different recipe ideas. I haven’t eaten there yet and now I really want to, but before I do I can at least take some inspiration in the kitchen from the leaves of this book. 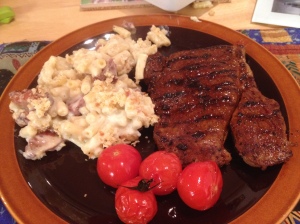 On this day I was taking inspiration from the Pitt Cue Hog Mac ‘N’ Cheese recipe to go with my Steak and Tomatoes. It was a tricky situation as I wanted the Mac N Cheese to be the star of the show, but I was using some terrific steak rub from Savory Spice in Chicago (Read More Here) so I was going to have to really go to town on this side dish if I was to maintain flavour parity on my plate. 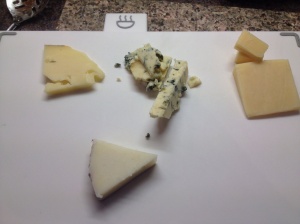 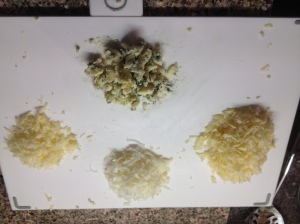 The success of a good Mac N Cheese has to depend upon the use and integration of some really well flavoured quality cheeses. The Pitt Cue Co. recipe calls for the use of three cheese; Stitchelton or Colston Basset Stilton, Montgomery Cheddar, and Ogleshield. When I was out shopping at Bakewell Farmer’s Market I managed to pick up two out of the three (I forgot to write down what I needed) and I had the Stitchelton and the Montgomery Cheddar, so to make the dish work I just had to improvise, so I used some Manchego, and some Jarlsberg that I just happened to have in the cheese cupboard (I don’t really have a cheese cupboard) 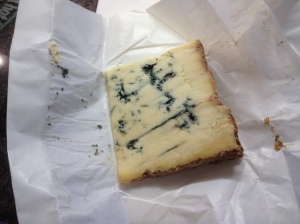 Focussing for a moment on that Stitchelton, this is a truly good artisanal cheese in both taste and method of manufacturer. It is supposed to be like a Stliton, but as far as I understand, it it even closer to a traditional Stilton since the food laws changed to insist that Stilton cheese cannot be made from Raw Milk (Stitchelton is, very old school). You can read a lot more about the history and how it is made on their website. 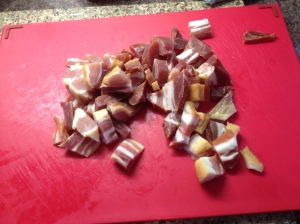 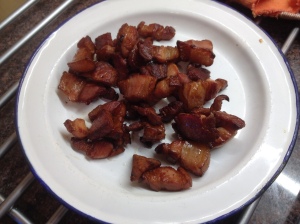 This dish needed some sort of salty smoked meat and I found just the right thing at Bakewell with some cured smoked bacon ends courtesy of Ricky the Butcher from Lomber Hey Farm. This bacon is so smoky that the smell lingers on your fingers after you touch it. That is great if you like bacon, but not so good if the neighbourhood dogs get the scent at the dog park. For this dish it was just a case of chopping it up and grilling it until crispy.

The background basis of the roux that was being used to make the cheese sauce was some thyme leaves, garlic, and shallots (all from the back garden). It was just a case of sautéing them up gently in some butter until soft and slightly on the edge of caramelized. 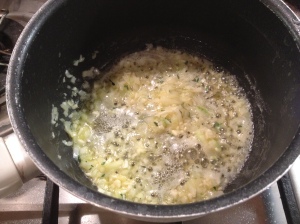 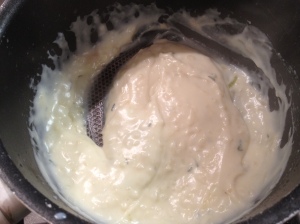 Once there then it was time to make the sauce, firstly by making a roux with hot milk and flour, before melting in all four of the cheeses. When I made this it did end up being a little on the thick side, maybe I used too much cheese, so I ended up adding a little more milk just to thin it out. 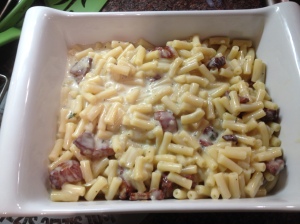 Assembling the dish was pretty easy, just a case of mixing the cooked macaroni, baked bacon bits, and sauce together, before layering (or pouring) into a dish 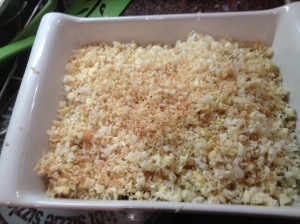 Even though I am not a fan of bread crumbs on my macaroni cheese, I did play the game according to the Pitt Cue rules so I sprinkled on some toasted bread crumbs before sticking in the oven to bake away for about 20 minutes at 180C / 350F. I left the dish in until the cheese started to bubble out a little. 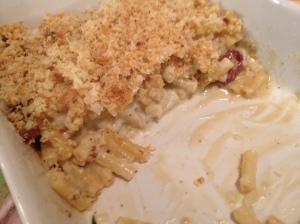 Even though I do say so myself, this recipe made much better macaroni cheese than I have eaten in many an American Diner. As I said earlier this is really all about the cheese that gets used and I think that really was the key on this occasion. I did deviate quite a bit from the original Pitt Cue recipe, but the inspiration and general process carried me through and I don’t think it would have been such a successful plate without their guidance.

If you want to try this Pitt Cue style you need to look at page 235 in their book, I am not going to list the recipe as that wouldn’t be fair to the guys, I think you can work it out from the tale that I have told. It is after all just good cheese, and good bacon, and some macaroni pasta. Enough said?