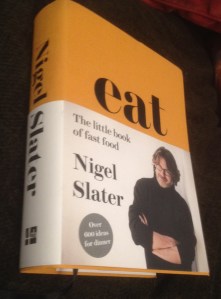 It is around this time of the year that the fridge is full of leftovers and we are trying to eat our way through the freezer so that we can restock with more farmers market goodies. I was rummaging around in the back of the fridge and found a solitary chorizo link and a rather small piece of Manchego cheese. What can I do with these I pondered, then I remembered a conversation about a Chorizo potato dish featured in Nigel Slater’s latest book offering ‘eat’

It is such a simple recipe that I am not even sure it counts as a recipe. Basically you bake a potato in the oven, fry up some chopped chorizo sausage, scoop out the potato filling and mix with said fried chorizo add some grated Manchego cheddar, then put the filling back into the skin and place in oven until cheese melted. It was so simple I didn’t even break it into more than one sentence, apologies if you needed a deep breath before you read that.

I also had a bit of polish sausage left in the fridge too so I grilled that up as a char dog to accompany the Chorizo potato dish and to make a rather simple supper. I am sure that you can use any cheese, probably best to use on with a decent amount of flavour so that it has a chance to compete for attention with the chorizo from your tastebuds.

It looks to be a pretty decent addition to the ever burgeoning cook book library and well worth getting your hands on.