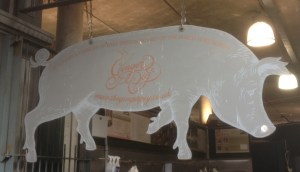 The Ginger Pig has six butchers shop across London all supplied from their North Yorkshire farm land.

Tim Wilson says on their website that “At the heart of everything we do is good animal husbandry and welfare; livestock that is looked after well in the field will simply taste better on the plate”.

That is my kind of philosophy in the world of food.

I have only encountered them at The Borough Market where I have bought a bit of meat and tried a sausage roll (more about that below).

So how did I find myself at the Ginger Pig Stall? I was standing in line at the Kappacasein grilled cheese sandwich stall in Borough Market and got talking to a couple of guys in the queue and we were comparing what we had eaten so far that day. They told me about the sausage Rolls at The Ginger Pig just around the corner and that it was the best thing they had eaten so far that morning and possibly the best sausage roll they had had for ages.

That conversation stuck like a cartoon speech bubble above my head and after my sandwich there was only one place that I was going to be heading to, and that was here at the Ginger Pig for a …sausage roll.

This was the only hot food being sold at the Pig, These little pastry treats were hidden away at the back of the stall, behind the scotch eggs, pies and the meat counter.

Blink and you would miss it!

The sausage roll is a winner for me firstly as it looks homemade (can I call a sausage roll rustic?), there is a great flaky pastry crust, egg washed so that it seems both rich and decadent at the same time.  The meat filling was still warm and the sausage meat crumbly and really quite moreish. This is how sausage rolls should be made. There is a recipe for the Ginger Pig Sausage Roll on the web here by Tim Wilson from The Ginger Pig Cookbook. I might try making it, but I guess, nay know that you will need some of their sausage meat to make it work.

To add I must concede that the recommendation was  spot on! 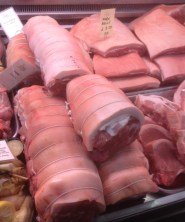 There is a lot of really good looking meat on the counters of The Ginger Pig, it is not cheap but when you look at it you kind of have that feeling that you are going to get what you pay for

I bought a couple of pork chops and they were a couple of the thickest chops I have bought for a while, they seem to be at least an inch thick. I was a bit worried when we cooked them that we would not do them justice and either over or undercook them. In the end there was no worries they were really juicy and really tender and the only confession I have is that I had to cut some of the fat off as I didn’t think I would be able to get it crispy enough without overcooking the pork. That was fine and here is a not so secret tip, we used the off cut fat with some oven roasted potatoes and it added some excellent flavor and at the same time gave us some nice pork crispy bits to crunch down on as well. I should reiterate that they were not that cheap but I have to say that they were worth it.

Did I buy anything else? Well yes I was not able to resist getting a weeks worth of smoked back bacon. It was a bit of a strange thing as I had a mixed experience with this bacon, and that was purely down to what I ate it with. The first morning it seemed to be way too salty, but the next day it was just right. I think that was down to what I mixed it with, Day 1 I had some black pudding and some salt crusted sourdough I had picked up elsewhere on the market. The next day I just had some creamy free range duck eggs with the bacon and it was just perfect.

What else should I have bought? The Pies looked good, but they looked really big. I need someone to assist me with eating one of these as they are not sized for a single person. The Scotch eggs were fist sized and I would have bought one but I knew that I would not have had time or space to have eaten one in time. I may well return for one at a later date though.

The Borough Market location is open 5 days a week and you can see when on their website. The other locations are at Abbeville Road in Clapham, Greensmiths in Waterloo, Lauriston Road in Hackney, Moxon Street in Marylebone, and Askew Road in Shepherd’s Bush.

It was a very popular shop when I visited at the Borough Market but they were pretty well organised so despite the masses passing through it was a quick and easy set of purchases. Everything is laid out so well that we ended up going back several times as our eyes caught different sections on the meat counters. I reckon Subliminal meat purchases are the next thing (Do I really need more bacon? er  yes would be the correct response).