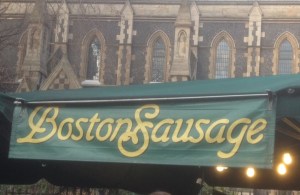 Boston Sausage have been trading at London’s Borough Market since 2007 and can be found there six days a week. Their hot food stand where they serve up a choice of sausage baps and burgers is in the Green Market right next to the Southwark Cathedral grounds. It gets pretty busy later in the day down that thoroughfare so be prepared to walk along in a light hearted jostle. Everyone is just looking for something good to eat so its a pretty relaxed crowd and you just have to be careful not to knock someone’s tasty treat, as that would be really a sad moment. 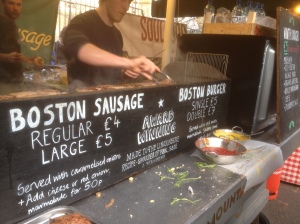 When we got to Boston Sausage, there was a pretty long line or queue stretching back behind the stall into the passage way behind the food stalls. It was probably about 30 people long when we joined it, but to fair it was moving pretty quickly and we only had to wait about 10 minutes to get served. That was about long enough to decide whether or not to have a burger or a sausage bap. I made my mind up last minute as the chap looked at us to place our order.

To be fair I had to get a closer look at the food on the grill and see the sandwiches that were going out. 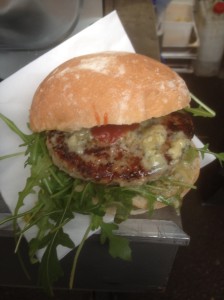 I had one of the Boston Sausage Burgers which they describe as “Our famous Boston Sausage meat patty served in an organic white roll, with onion marmalade, stilton cheese and rocket.” They were selling them for £5 or you could have a Double patty for £7.

I am never quite sure about blue cheese on my burgers but it always seems to work. In this case it was a much stronger flavour that you often get, but that might be because of the quality of the cheese. I think that they use Colston Basset Stilton in the sandwich, I know that is what they add to their speciality sausages.

It was OK though as the strong cheesiness was counter balanced with the sweetness from the caramelized onion. I am always a bit fan of the peppery and crunchy rocket salad leaf, I think it is my favourite green lead addition to any sandwich. The burger and fillings were all contained in a nice soft floury bun, and the bun was just the right size as well with very little burger or bread overlap.

The best bit though was the burger, it was quite different as it was made from the Boston Sausage meat and you could really tell the difference in terms of both texture and of bite. The flavours of the sausage meat really came through well, you could distinctly taste the herbs and the pork meat as individual flavour components which made each bite even more enjoyable. The burger patty was moist and juicy without being greasy and any juices that came out were soaked up into the bread bun, with every bite a joy of meat, juice, cheese, onion, and rocket.

Did I enjoy this burger? what do you think? Apart from my opinion which is pointing well up the ‘clapometer of taste’ I think that the queues lining up to buy the Boston Sausage offerings are telling their own story as well!

The Borough market is located close to the Thames behind Southwark cathedral, and a short walk from Borough tube station and London Bridge tube/railway terminus. The Boston Sausage hot food stand is in the row of vendors within the Green Market section just next to the restaurant called ‘Fish’. It gets a bit narrow there in the crowds with the stall creating it’s own mini bottleneck which is a good plan as it slows everyone down and helps to draw the crowd in.

Boston Sausage or ‘Mountain’s Boston Sausage’ to be exact is run by and supplied with meats from their butchers shop in Lincolnshire (located at Bridge Foot,  13 High Street, Boston) they also have a stall in the Borough Market as well where you can purchase their ‘classic Boston Sausage, Boston Chipolatas, Farmhouse Sausage, Raw and Cooked Haslets & Sausage Rolls.’

The stall in the market is well worth a visit, and if I am over in Lincolnshire I may well try and find the sausage source at that Butchers shop.