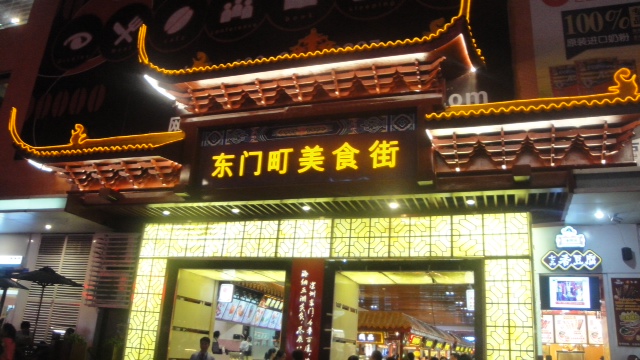 I did say that I was coming back to the Dongmen Pedestrian Market to try some more of their street food and as I was passing by during lunch I just stopped in and bought one quick snack which turned out to be quite a decent little bite.

That ‘little’ bite was a ‘Jianbing’, 煎饼 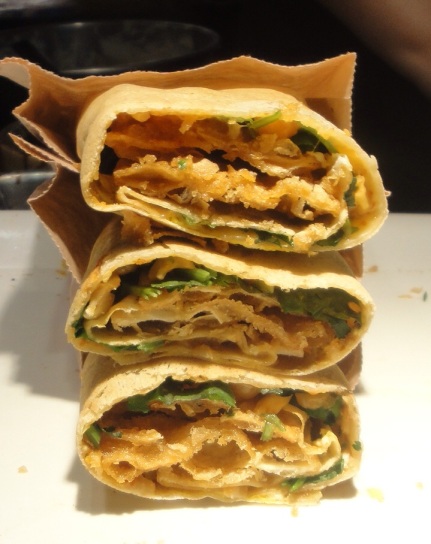 I only got one piece of this not all three!

I don’t really know how to describe this – I have been told that it is called Chinese Crepes (Jianbing, 煎饼) and I have since been told it is like a ‘Chinese Dosa’ (I can see that to be fair), but  at the time I could not talk to anyone really to confirm that so I just watched the man make me one, while I took a few pictures which he seemed happy about. Well I had just paid him my 6RMB (60p) for my ‘wrap’ 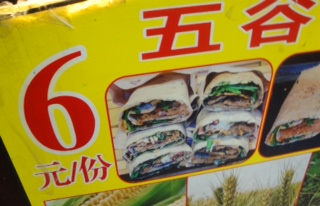 From what I have been able to glean it is essentially a ‘Thin fried egg base, a scatter of scallions, a smudge of rich chilli sauce, lettuce or cilantro (coriander) leaf filling and a crunchy centre of crisp fried dough called Baocui (薄脆).”

So how did my man make my snack? 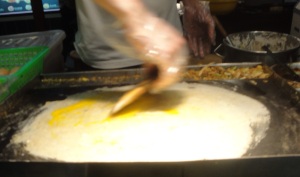 The first step was spreading the egg base onto the hot plate. He was doing this so fast I hardly had time to get a photo. 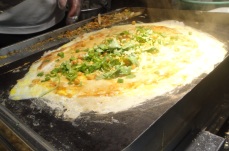 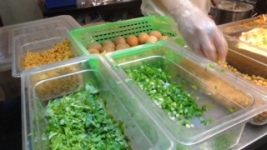 Once it was spread out thinly and starting to crisp he threw in the fillings. On mine it was lot of scallion, some coriander leaves and broken up pieces of that crispy dough. He had everything to hand next to the hot plate.

Trust me it was a real production line. Even though this may look like I was just taking pictures of him making mine, In all honesty he had made about three or four in that time. The man was a machine! 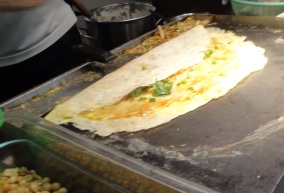 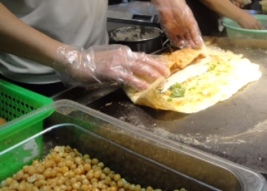 Within seconds he had the whole sheet of casing and filling folded up and loosely rolled. Then he was chopping it into three bits before dispatching each one to the hungry crowd in a brown paper bag

It was like lightening quick, I hardly had to wait at all. Just a couple of minutes from start to finish.

I quite liked this as it was a little bit different, a crispy wrapper filled with coriander and scallions plus crunchy bits of cracker like dough. It would benefit from a bit of sauce as it could be a bit dry, but apart from that a nice little snack for lunch.

Apparantly  “According to legends, jianbing was invented nearly 2,000 years ago during the Three Kingdoms period (220-280) when Zhuge Liang, Liu Bei’s chancellor in Shandong Province, was faced with feeding an army of soldiers who’d lost their woks. Zhuge Liang ordered the cooks to evenly mix water with wheat flour and spread the dough onto a copper-made griddle suspended over a fire. The dish lifted his soldiers’ morale and they fought their way out of an ambush.”

I found that info on an excellent website “The World of Chinese” where they give even more detail of how it is made and what the regional variations are. It is worth a look.

OK onwards and upwards! there must be some more snack food around here to be consumed!