“Persiana” by Sabrina Ghayour is a most beautiful cookbook full of amazing recipes and fantastically mouth watering photographs of food. It’s subtitle is “Recipes from the Middle East and Beyond”. The Author ‘Sabrina’; ‘Private Chef, Supper Club Host, Cookery Teacher & Writer’ tells us that “Food is a staple of life and every day should be a celebration.”. That is so true, this book was one of those that was sold to me the very moment that I started to flick through the pages. Reading through the lists of ingredients and titles of the recipes made me stop and ponder a while. ‘I don’t cook food like this but it all sounds so delicious, I have to try this’

I decided to jump in at the deep end by picking a recipe that uses one of my least favourite ingredients the Broad Bean. Do you like Broad Beans? I am starting to like them having spent almost my entire life loathing them. As I am finding out that ‘the trick’, surprisingly enough, is apparently is to ‘cook them properly.’

I will start the story at the end to show you what the dish looked like when finished. 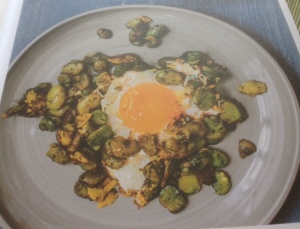 It almost came out just like it looked in the book.  Not bad at all

But how did we get there? 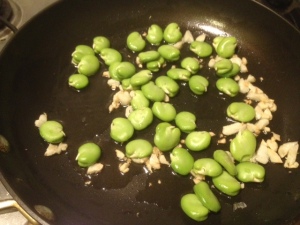 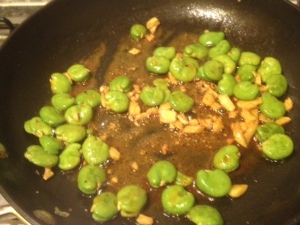 After a while they started to crisp up and colour slightly and you add  in turmeric, sea salt and black pepper 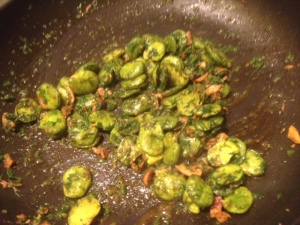 After about 5 minutes when the juices have started to soak into the beans, you mix in about a packet of chopped dill and cook for about another 8 minutes. 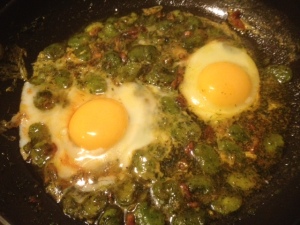 Drop in a couple of eggs and let them cook slowly in the heat of the beans. The recipe advised to shake the pan a little to let the egg white seep in amongst the beans.

I did that, then since this was going to be a ‘sunny side up’ egg dish, I put the lid on to let the yolk set a little bit.

I am not sure how it tasted ‘in the book’ but I enjoyed the flavours of mine. In the book Sabrina says that the dish is ‘fiercely garlicky’. It most certainly was, the sort of garlic level that stays with you for a while. It was worth it, although perhaps not one for date night, more like one to keep the vampires at bay. The crunch of the beans and the soft egg were also big features of the dish. If I make this again I think that I might try and keep the garlic less crispy, perhaps using whole garlic cloves and cooking on a lower heat with more patience than I showed would be a good idea.

This ended up being a pretty good starter or side dish. I am not sure what I should serve it with, perhaps as advised by Sabrina in the book it would go well with some flatbreads or a naan bread. A little bit of reading up on the dish suggests that it is usually served with Kateh which is a Persian rice dish that is a traditional dish in the northern Iranian provinces of Gilan and Mazandaran. There are a few rice dishes in the book that I might try next time to go with it, perhaps the Persian Herb Rice (Sabzi Polow) which has coriander leaves, parsley, dill, chives, and spring onions in it. I would probably also take Sabrina’s recommendation and make the Persian Flatbread (Naan Barbari) as that looks awesomely tasty in her book as well.

This recipe came from the cook book “Persiana” by Sabrina Ghayour described on the cover as ‘A celebration of the food and flavours from the regions near the Southern and Eastern shores of the Mediterranean Sea” I am very happy to have it on my kitchen shelf. Check out more about the Author and Chef through her Twitter feed and on Facebook