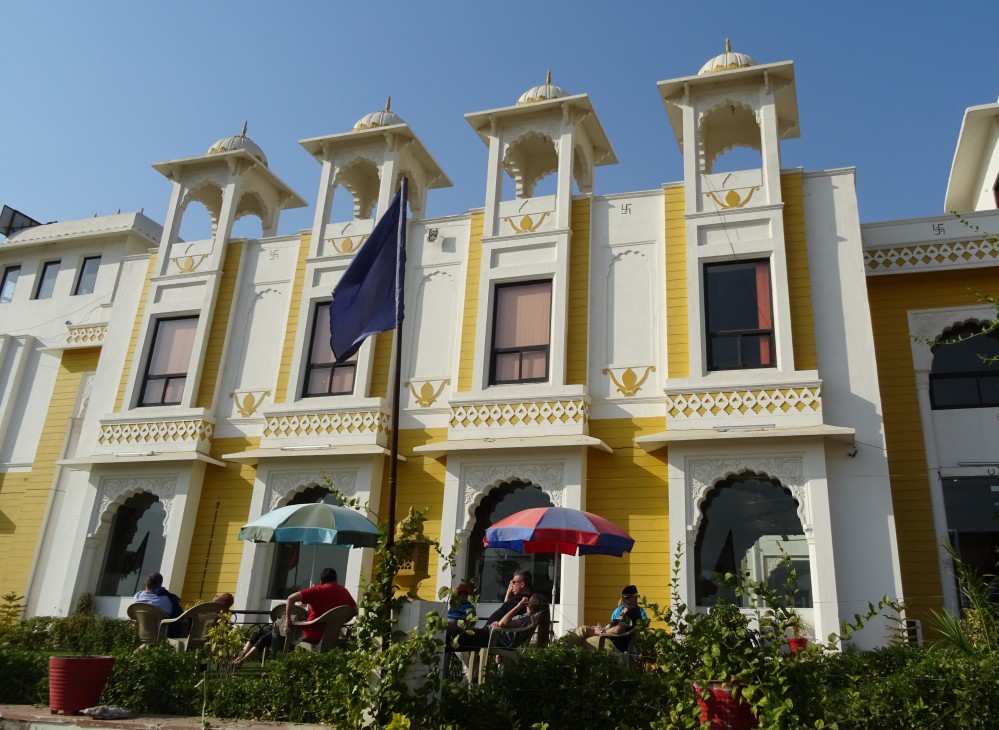 The Kuber Resort located on the Jaipur-Ajmer Highway (HN-8) describes itself as ‘A Heritage Haveli’ and as ‘one of the best resort on HN-8’.

They say on their website that “Our Menu Offerings Cater to both global and Indian taste preference. Our endeavour in staying relevant has helped us to offer a good variety of Indian Flavours. Various Customer choices include Paneer Tikka, Dal Makhani, Paneer Malai Tikka, Chiken Tikka and Many more Varieties.”

We just happened to stop here on our way from Udaipur to Jaipur, we had seen these bright yellow signs on the roadside advertising  The Kuber Resort for over an hour and it seemed like we were never going to arrive.

We spent a little time checking out The Kuber Resort menu looking for something small and light. Once again being stuck on the bus for a few more hours certainly makes you consider your choice a little more carefully than you might if you were back home and near to your bathroom. 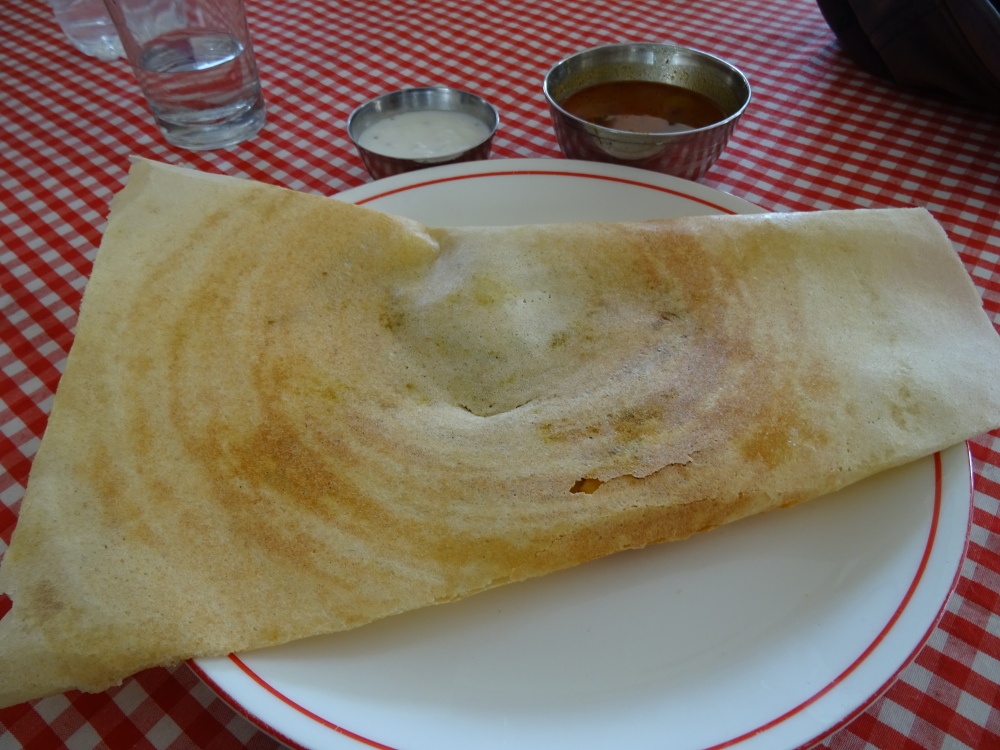 I was having the Masala Dosa for about 200 rupees,  I am almost ashamed to say that this was to be my first ever Dosa. I say that as when I worked in Hyderabad back in 2010 for 4 months  these were on sale all over the place. My Indian work colleagues kept on trying to persuade me to try one. I don’t know why I never had one, it was just a strange time in my pre food hunting world and we spent most of the time avoiding the local food to stay healthy.

Apart from the fact that it looks like a big crepe I honestly had no idea what a Masala dosa was. I was to find out that is was actually stuffed with boiled potato and peas. It seemed to be a little bit spicy with mustard seeds and it also had a nice gentle lemon tang. I was to learn (by looking on that old gem Wikipedia) that the stuffing is typically made from boiled potatoes with a seasoning of mustard seeds and garnishing of grated coconut, coriander, and lemon juice. I am not sure that I could taste any coconut.

I also did not know at the time that not all dosa is stuffed. The dosa itself, the outside crispy covering is made by soaking rice and lentils overnight in water. The mix is then ground into a batter, which is used to make the dosa.

The dosa came out in small batches of 2 or 3 so we figured that they were being made to order. I imagined some sort of great big cast iron crepe pan being used to spread out the batter and then expertly folded up with the potato mix inside.

I wish that I had not waited so long to try my first ever Dosa. They are pretty darn good!

Someone ordered some plates of mixed vegetable pakora to share. They were really quite good, the batter was really light and crispy, and the vegetables inside were crunchy and still juicy. It was a bit of a lottery though as there were all sorts hidden beneath that crunchy coating. If you were lucky you picked one with potato or onion or even a bit of sweet pepper. One or two of us drew the spicy straw picking out the ones that has whole green chillies inside. That was a hot spicy bite!

One of our party had deviated from the mass masala dosa party and had ordered the Shahi Vegetable Thali. This did look pretty good with pots of rice, a pulse dal, two pots of vegetable sides, some curd, salad, chapatti and a sweet (some sort of rice pudding). It looked quite decent but then again it was one of the more expensive Thali that we had found on our trip so far. The cheapest being one that we all had on our first night at a temple where we had paid just 55 Rupees. He said it was really nice, but secretly I think he had his eye on my Dosa! 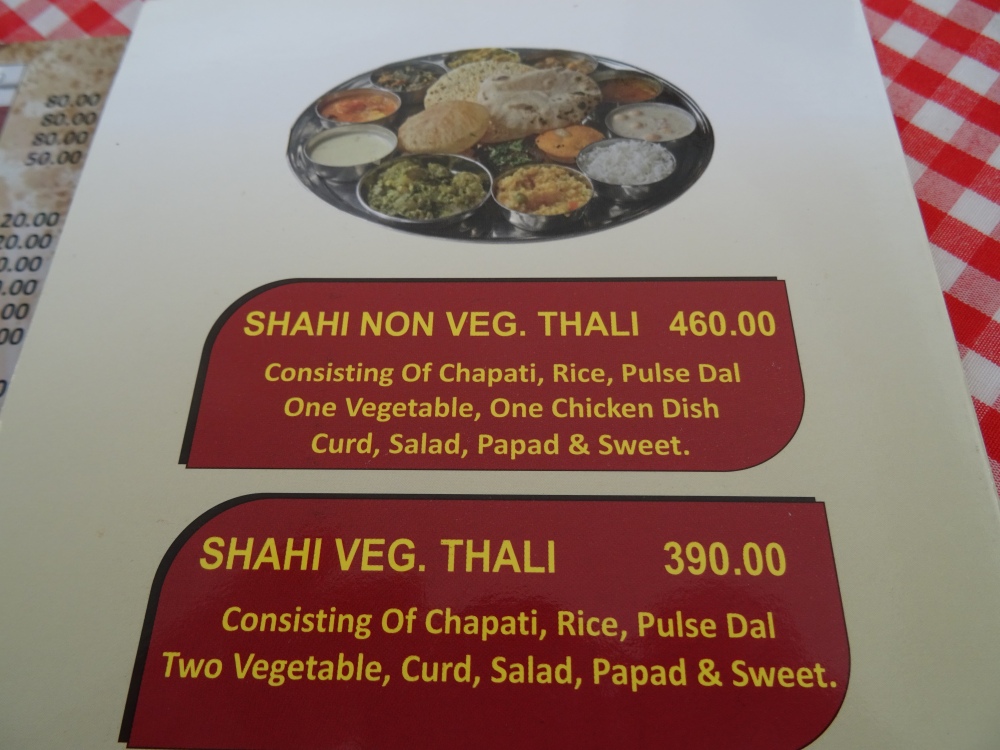 The Kuber Resort was located

It was a very popular place to stop on the roadside and one of the cleaner places that we had paused to eat. It wasn’t quite as much fun as some of the basic roadside restaurants we have stopped at, but the food was pretty good if a little bit pricier in comparison to other stops. Even so for two of us, our share was only about 750 rupees (more or less £7.50)