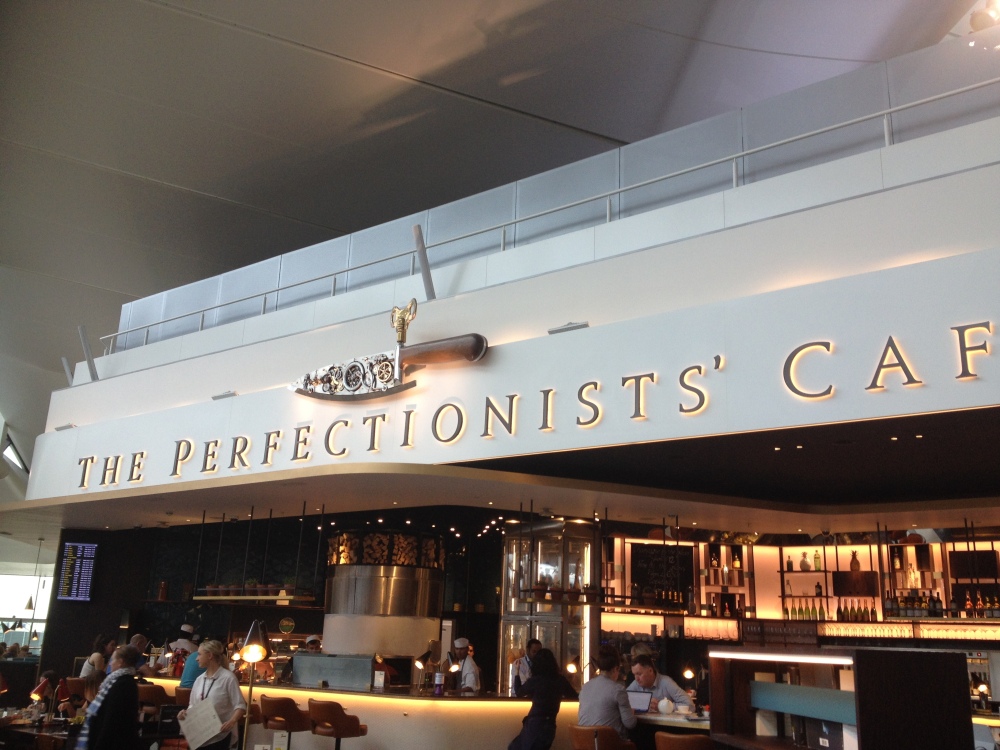 The Perfectionists’ Café in Heathrow was apparently ‘Inspired by Heston Blumenthal’s In Search of Perfection TV series, in which he examined every aspect of our favourite dishes in order to make them as delicious as possible’. I liked the look of it as I meandered my way through Heathrow Terminal 2 looking for someone to sustain me before I got on the plane. 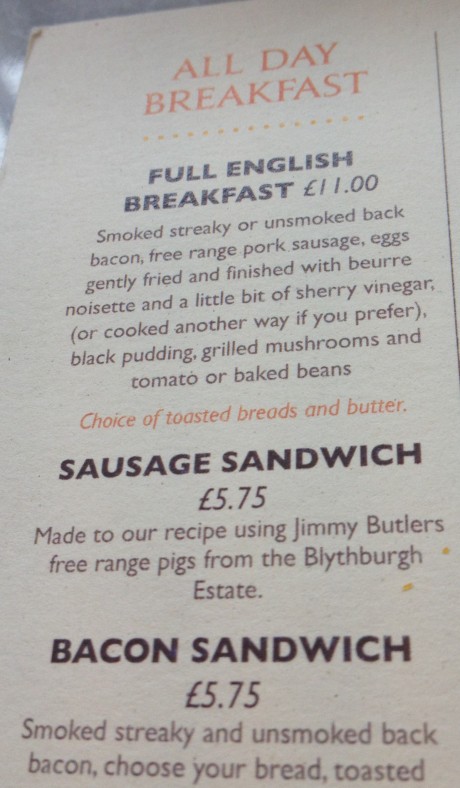 I do enjoy the opportunity to eat a last decent English Breakfast and have a decent pot of tea before I fly anywhere abroad so this seemed to be a place that could cater for my whimsical desire.

The menu was offering a bacon and a sausage sandwich, both of which could have filled a small gap, and perhaps would have been enough.

In my heart of heart’s I really wanted that ‘All Day Breakfast situation’ and even though the price point of £11 had not piqued my interest, the fact that this place was linked with Mr Heston Blumenthal had most certainly made me more willing to shell out the money and give it a whirl.

The All Day Breakfast 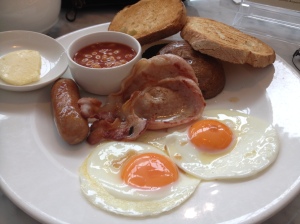 Well what was the verdict? It all looked quite pretty and quite organised on the plate. It did feel a bit contrived, perhaps there was too much order on my plate. I liked the taste of the bacon and the black pudding. I would have liked the fat on the bacon to have been crispier. The eggs seemed to be a little undercooked for me, the white wasn’t quite set. The menu said that the eggs were ‘gently fried and finished with beurre noisette’ ( I should have asked for scrambled). My beans came in a pot, for no particular reason other than plating style? and the large flat mushroom lay face down almost afraid to show itself. The toast was a bit too serious and crisp it needed that butter (also in a pot) smothered on it well before it made it my table by which time it was not quite hot enough to melt it.  I also had a sausage.

There was nothing wrong with the breakfast, together with a pot of tea it did indeed fulfil its role of sustaining me through until departure time and well through the first drinks service on the plane. Was it perfection? Well maybe not my idea of perfection, the sum of the parts didn’t match the whole. I think that maybe it was too posh for me to understand.

I had a look on the web to see if I could find more about the All Day Breakfast from the original ‘In Search of Perfection TV series’ and I found this great blog post from “In Search of Heston” where they made ‘Heston’s Ultimate Breakfast’ If I am honest I liked the look of their effort more than the one I had at the café. The one they serve in the café really is just a bit too contrived to be an honest down and dirty all day breakfast.