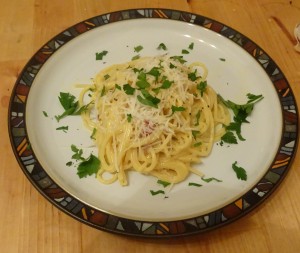 This week I have been exploring the pages of my latest find, the excellent cook book “The Family Meal” by Ferran Adria of El Bulli Fame. The basic premise of the book is all about the meals that they cooked at El Bulli in between service for the staff to eat. This is known as the ‘Family Meal’ or ‘Staff Meal’

The book is filled with three course menus and a total of 31 different meals. It takes you step by step through making the sauces, the stocks, and all the essentials that you need before mapping out how to prepare and cook each set of three dishes for each meal.

Just to give you the idea, Lets try one of the recipes out – I pick Carbonara 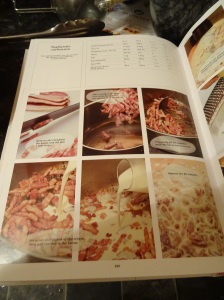 Every recipe is laid out with step by step instructions and photographs that show you what it should look like at each stage. This is great as it made it so much easier to learn what I was really supposed to be doing and also to see if I had even got it correct at that point or even close.

As I tried to test out the recipe, I took photos as I went along to see if I could match the book 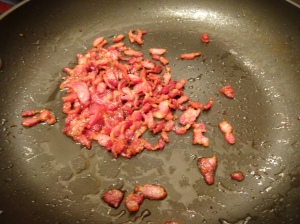 The first few steps in the recipe are chopping up the bacon but I kind of figured that we can all get to that point without a set of photographs?

You then cook it slowly for 10 minutes, which is a lot longer that I usually cook it for so that was something new or different 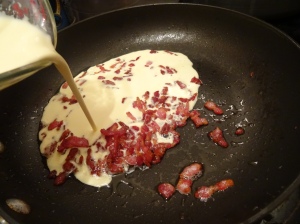 You then add most of the cream to the pan filled with bacon and you cook it slowly for about 20 minutes at a simmer until you end up with a pan filled with this awesome new thing in my life; bacon cream. 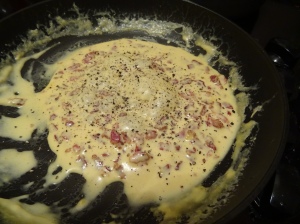 Twenty minutes later you find yourself with a thick creamy mixture packed with bacon flavour. The recipe suggests that at this point you should season well before taking you take the pan off the heat, so I did with as much black pepper as I could get away with. 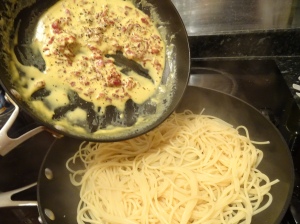 It’s all getting pretty simple now. You add the bacon cream into your cooked pasta. The recipe was for tagliatelle but I used spaghetti instead 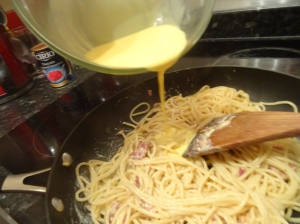 It got a bit steamy as I slowly poured in the mix of whisked egg yolks and cream into the pan. Quite tricky to do while holding the pan, and a camera, and stirring as well. Perhaps I should have been concentrating a bit more. 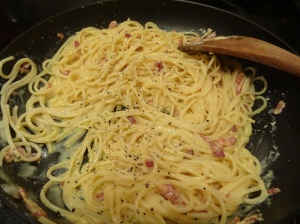 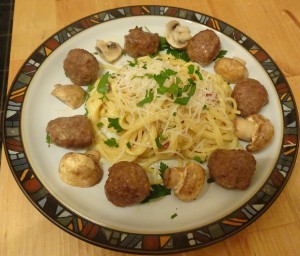 Finally I ruined all street cred that I have gained by actually cooking the dish properly by adding meatballs and mushrooms to the plate. Old habits die hard, but in the end they were additions that were just not needed. The pasta carbonara is so good that you only need that on the plate. So I learnt that less really is more.

I love Carbonara, but until now I have never really learnt how to cook it properly. In the past I have been making a version from one of Jamie Oliver’s Cookbooks a recipe that I really love, but in my heart I knew that it was not quite right and perhaps something that would get me thrown off in the first round of Masterchef (in my dreams), maybe now I could dream a little higher. 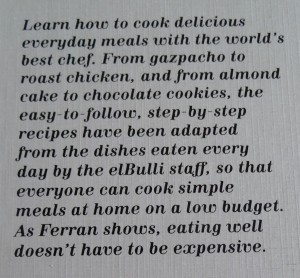 “The Family Meal” by Ferran Adria is truly a must have book. In just a few hours it transformed my ability to cook one of my favourite dishes. It was so good that I ate the same meal for 4 nights in a row, and it was better each time!

I cannot wait to cook some more meals from this cook book!