The Village Deli & Grill in Morrisville, North Carolina, is located on Aviation Parkway about 5 mins off the interstate route 40, and as this seems to be the closet deli to my office in Morrisville where I am currently based it is likely that this could be an option for a regular bite to eat for lunch.

I came over to try it out with Mike @RunnersThoughts or rather he brought me here to try it out. I kind of figure he is a Village Deli veteran.

On their menu they say that they ‘Try to find all-natural, organic and local products in order to ensure that you are being served the finest and freshest meal”. I like the sound of that!

They also say “You have to eat, so why not eat fresh wholesome foods prepared daily” Why not indeed?

You know that I love me some ‘Chalkboard Action’ and I am a total sucker for the Special of the day.

Today was no exception as I found myself fixated on the words “Brisket Melt” within moments of my eyes meeting the chalkboard above the counter at the Village Deli. Grilled Brisket topped with lettuce, tomatoes, grilled onions, and provolone cheese served in fresh grilled sourdough with a side and a drink for $11.75?

Yes that is what I am having!

I love the sandwiches over here in the States, somehow they just seem to be able to pack so many tasty things into them and this Brisket Melt is no exception.

It all starts with the fantastic grilled sourdough bread which has a great light toast, smothered with a little butter, but still having that crunch and of course that subtle malty beer taste. Inside it is layered with precision deliciousness so that every bite is as good as the last.

Just under the topping toast slice is a layer of soft melting provolone cheese and a smear of mayo so that as you bite in you get crunch, then creaminess. Within a mere moment you hit the multiple layers of soft tender brisket, then some soft grilled onion, more brisket, followed by a brief layer of fresh juicy tomato and crisp lettuce.

Finally you exit the other side with another crunch of sourdough bread and you find yourself with a mouthful of delightful food joy. I think I might have enjoyed eating this sandwich! 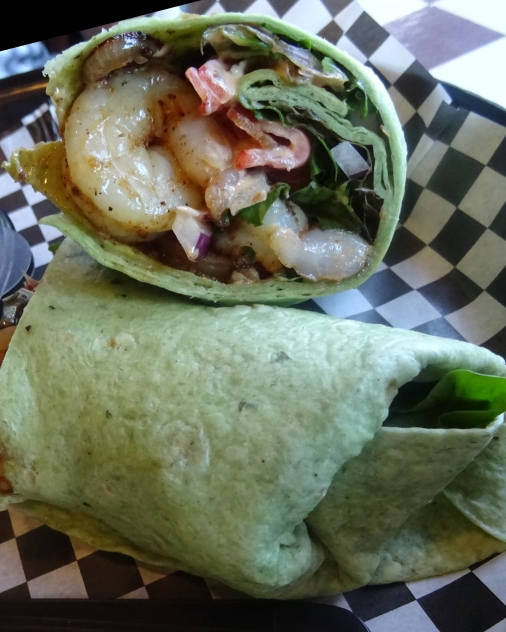 Mike had a much healthier option the Grilled Cajun Shrimp Wrap. I guess he has to eat more sensibly otherwise those marathons he runs would be tougher, but hey does he need to? he can burn off this stuff when he wants pounding the road during training.

It did look pretty good though, especially those big juicy shrimps in the tightly rolled salad filled wrap. Not sure why it was green though.

Onion Rings with a side of sandwich

The onion rings deserve a special mention in my book, they might not look that pretty, but they were pretty darn close to perfect in my eyes. I loved the crispy crunch of the deep fried coating, and I love that you can take clean bites as you eat them without them falling apart as you do.  A basket sized portion of these bad boys would set you back $5.25 so was good value having them as a side with my sandwich. 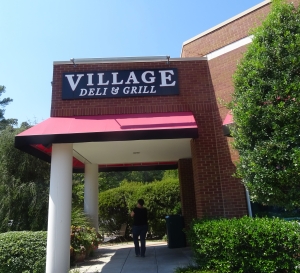 The Village Deli and Grill is just one of four locations in the area, apparently there are another two in Raleigh and one in Wake Forest. They have been operation since 1996 and on their website say that they were;

“established based on a vision that we had about offering hearty, homemade food in a rustic and comfortable environment.

We wanted to create a wholesome and warm establishment where people would feel welcome and well-fed!”

Other Menu Options I have my eye on

I like the sound of their Build Your Own Burger or Grilled Chicken Sandwich Menu. At some point I am going to have to try the ‘Carolina Burger’ which is topped with ‘American cheese, chili, slaw, ketchup and mustard’, just because to have to try the local speciality. Chance are though I will try the Chicken Bacon Cheese Melt first.

The item that caught my eye the most was the Corned Beef Hash which I love. The fact that they top theirs with two fried eggs is even more of a bonus!

I am pretty sure that I will be back in to eat this as well!

The Morrisville branch of the Village Deli and Grill