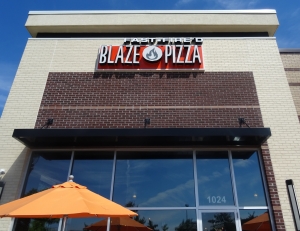 Today’s lunch was at Blaze Pizza in Park West Village in Morrisville. It is described on the web as a ‘Hip counter-serve pizzeria dishing up crispy, thin-crust pies made with creative toppings & sauces.‘ I would describe it as pretty decent tasty thin crust pizza served up pretty goddam quickly. They use the, now commonly seen, ‘fast fired in 180 seconds’ method to get the pie into your hands more quickly.

This is not my first visit to one of the nation-wide Blaze pizzerias, back in March 2015 I hit one up in Chicago while MyFoodHunting for one of my sister blog sites The Chicago El Stop Food Hunt Project. That was just by the Belmont El Stop and when I looked back it seems that I picked the same pizza as I did today. My Stomach brain is pretty consistent.

I was here again MyFoodHunting with Mike from @Runnersthoughts, we came in his big white truck. Mike’s truck is cool, my rental is a Nissan Note which isn’t as cool.

Luckily Pizza is also cool, so lets get some of that to stuff our faces with

I had the Meat Eater which is one of Blaze Pizza Signature offerings topped with ‘pepperoni, Italian meatballs, red onion, mozzarella and a red sauce’.

I love this combination, sweet tangy red sauce and salty cheese mixed up with spicy meat of two kinds, what is not to like?

The crust is pretty good too, nice and crisp so that when you grab a slice it does not go all floppy on you. I like to fold mine into a kind of pizza sandwich.

Just like on my first visit here I was in a rush to get my first bite and almost burnt my mouth on the seriously hot sauce. Luckily I was sensible enough to let it cool a bit before I started to stuff slices into my mouth like a squirrel hoarding food for the winter.

Even though this is big chain pizza I still Love it, and suspect I will eat some slices again while I am over here in the state of North Carolina 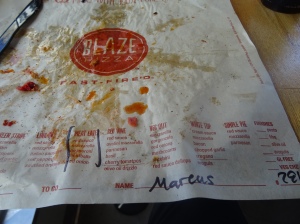 I left my tray like a crime scene for CSI Pizza.

I think it is an open and shut case though, as it has my name emblazoned upon the sheet.

Yes your honour I did eat the whole pizza pie for lunch and I would like numerous other occasions to be taken into consideration before sentencing.

Build your own pizza

Mike went for the ‘Build your own pizza’ option which really should be policed far better as they let him add ham and pineapple as toppings!

‘Shakes head and walks quietly away’.

I did start to pass comment that only 12yr olds eat pineapple on their pizza’s, but then I remembered that I like ketchup on my hot dogs, a criminal offence in the state of Illinois, so I let it go.

To be fair it did look pretty tasty!

and he does have a cool truck

This particular Blaze Pizza was located at

I quite fancy the sound of the ‘Green Stripe’ – “pesto drizzle over chicken, red peppers, garlic, mozzarella, arugula”

Build Your Own Pizza Menu

Note: Pineapple is not a vegetable!