This weekend I had made plans to seek out some of the local breweries in Cary, North Carolina, and I had The Bond Brothers Beer Company on my radar and in my sights. It was pretty lucky for me that the same day I chose to visit coincided with the Downtown Fall Festival; a collaboration between Bond Brothers Beer Company, The Town of Cary, and The Heart of Cary Association.

There was a lot of really good beer on offer inside the brewery building and from kegs around the site.

My chosen drinks were the Cary Gold from the Bond Bros. and the Boyz Don’t rye which was a collaboration between them and John Federal

The Cary Gold is a Cream Ale at 5.25 ABV described as “The easiest drinking golden ale around. Based on an historic style of beer brewed before prohibition”.

It was true that it was certainly quite easy on the palate and easy to drink, I enjoyed it immensely.

I kind of also really liked the Boyz Don’t Rye which is a Saison / Farmhouse Ale at 5% ABV this was describes as “A tart, rye saison with over 2lbs/Barrel of Hallertau Blanc hops”

I have quite got into this Saison style of beer since I have been over here, it is very refreshing, crisp, clear and tangy. It looks after your palate, but be warned they seem to really be quite deceptively strong. Excellent

I enjoyed both beer so much that I ended up having two of each.

It was lucky that there were a lot of local food trucks lined up on the street outside the brewery to help me mop up all that alcohol. The full list was The Humble Pig, Fetch Hot Dog Co., Chirba Chirba, The Tot Spot, Fuzzy’s Empanadas, Tacolandia, The Cookie People, and Del’s Lemonade. I did my best to sample as much food as I could in between sips of beer. 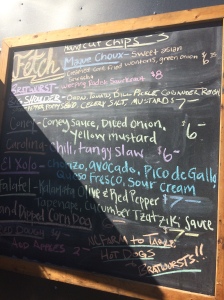 Fetch was one of the first Trucks I stopped at, they are a food truck from Hillsborough NC offering Gourmet Farm to Fork Hot dogs. They had a long line and a pretty enticing menu, so I was quite excited to try them out, as both of these were a good sign to me.

There was plenty of temptation on the board and I was sad that I had to only have one, I felt that it would have been unfair on the other trucks to fill up just here.

I could have gone simple having a “Coney”: Coney Sauce, Diced Onion, and Yellow Mustard”, or the more local style of the“Carolina” with chili and tangy slaw”, both for $6.

I nearly had the Chicago dog that was hiding behind the name “Big Shoulder: Onion, Tomato, Dill Pickle, Coriander relish, sport peppers, poppy seed, celery salt and mustard” for $7. They all sounded good.

So what did I get? 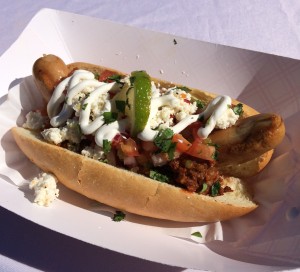 I had chosen the El Xolo chorizo, avocado, pico de gallo, queso fresca, sour cream. It also had a small slice of lime tucked into the top which luckily I spotted before I chowed down into the dog.

Visually this is quite a beautifully presented Hot Dog, it got my taste buds excited as soon as the nice lady in the truck handed it to me. It was a bit of a messy eat and I did need to head off for more napkins to clean my chin after eating it.

I really liked the mix of the toppings, they were bright and fresh and something new to add to my taste repertoire. The crumbly chorizo added a nice bit of spicy tangy heat and the sour cream helped to cool it back down again. I liked the salty and sour taste of the queso fresca (a kind of Mexican goats cheese) and the avocado was a nice touch too..

Did I forget to mention the dog itself? 🙂 Apparently the dogs come from Weeping Radish Butchery in Grandy. They were pretty good and had a lot of good flavour and a nice snap to the bite.

Looking forward to crossing paths with Fetch again. I will follow them on Twitter @FetchHotDogCo to see where they are

The next Food Truck I visited was Tacolandia, no prizes for guessing what they specialise in 🙂 I was pointed in their direction by a couple I was drinking beer with who had brought a chicken philly wrap over to our table. It looked good so I headed over to find out a bit more.

I was much more interested in the list of Tacos on the Menu Board and was looking to try something that I had not had before. I surprised myself by ordering the Taco Lengua which is beef tongue to you and I. Why not? Bourdain was all over this in a recent TV episode so I figured I should get with the ‘real’ program and have something authentic. Big question! Was it nice?

This was a pretty basic yet most enjoyable affair, my Taco lengua was filled with a good sized amount of meat and some simple topping of raw onion and cilantro. I liked the softly fried thick cut onions with a little bit of spice (I think cumin) and the lime slice was a nice touch to add some citric tang. The tongue was soft and quite delicious, it was a bit fatty so that lime juice was great to cut through the fat.

Fuzzys Empanada’s is a local food truck from Wake Forest serving up super hand made empanada’s around the triangle. I love this pastry treat so I just had to have at least one of them to try. 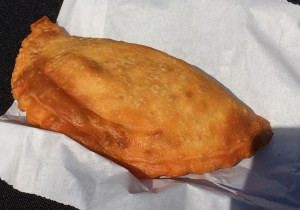 I picked up on of the Triple P Empanada which was one filled with “Pork sausage, ham, chorizo, onions, peppers, cilantro, mozzarella and provolone”

This was a pretty decent sized Empanada for $5, it was almost pasty sized. I loved the pastry and it held that super spicy filling in pretty well.

This is perfect as a hand held treat. I would have liked them to be a bit smaller so that I could eat like a handful of them easily 🙂

This was a great event at the Brewery and an excellent chance to mix up the beer with a whole load of food truck action.

It seems that Food Trucks are a featured fixture here at the brewery, there is a whole schedule on their website saying who will be there check that out here