This last weekend I visited Asheville to sample the breweries and while I was there I wanted to learn something about the local food scene so I booked myself on the Asheville Food Fan Foot tour. The tour was run by the effervescent and entertaining local food expert Stu Helm, he was an excellent guide and was great company throughout the tour. He was one of those guys that you just want to hang out with.

It turned out to be my best decision of MyFoodHunt trip in North Carolina. Stu had a lot of great stories about the local town and about the local eateries. He knows his stuff is what I can say.

We started at the Aloft Hotel, where I was encamped for the night, and headed around the south slope and downtown visiting a brewery, 4 or 5 restaurants and taking in a few bakeries and sweet shops

I am not going to give the whole tour itinerary away as that would spoil some surprises, and anyway I think it changes from week to week, I will however just share some of my highlights and some of the things that made it such an enjoyable, educational, and enlightening stroll around the slopes.

We visited Local Provisions where we were presented with a hybrid dish of ‘Brunch potatoes with house made kimchi’. I liked it, but a few others seemed a little less certain. The brunch potatoes were little cubed crispy treats, they were nice enough on their own, but I would be bored after a small handful so I was pleased that they were mixed up with the kimchi.

The kimchi is an acquired taste that I already had in my bag, but one that not everyone likes. I love the hot spicy tangy pickle taste and crunchy vegetable. It surprises me each time as it starts of like “what on earth is going on here’ and moves swiftly after a few mouthfuls to ‘OMG my gob is tingling all over, it is scared but wants to keep going on for more (like the line for a rollercoaster)”.

Comment to self before it gets pointed out “You hate rollercoasters” – yes I do, but if they were tasty and I could eat them, I might like them.

I liked this dish, I wouldn’t order it, but I liked it. 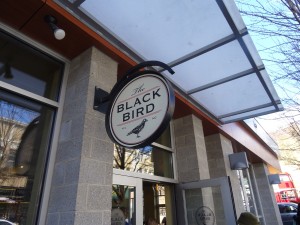 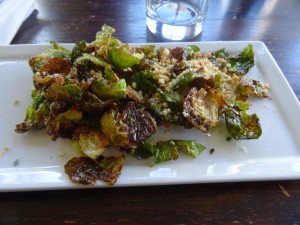 Blackbird was the restaurant in the corner of the Aloft Hotel where we started and now had circled back to. They served us a plate of  “Thai Chili Roasted Brussels” from their bar menu – described as “Roasted Brussels, Peanuts, Feta Cheese, Basil, Mint, House Made Thai Chili Sauce”

Initially I was a little disconsolate but within just a few forkfuls I was a happy camper Finally after 48 years I find a dish of Brussel sprouts that I like.

Until this plate served up at Blackbird, the sprout and I have been arch enemies. I dislike it so much I even look down on other people who love the green bullet and wonder what is wrong with them.

This dish is really quite amazing in both execution on the plate and mentally in how it has opened up my mind to the possibility that this humble veg and I could sign some sort of dining treatise.

I was expecting a bitter leaf, but what I got was a refreshing bite of food, probably that mint, and a sweet back bite (I just made that up) from the house made ‘sweet’ chili sauce. The crisp fried sprout leaves mixed in so well and that feta added tang, the peanuts always a great bed fellow in an Asian dish.

My one worry and thought was for the poor soul who had to peel each brussel sprout into individual leaves! What a faff, but well done as it opened my eyes or taste buds to a use for this green ball that has given me so much dining grief over the years. Well played my son, well played indeed. 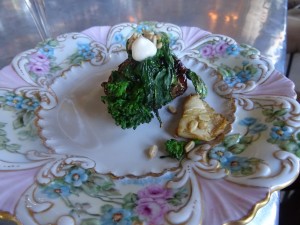 Sovereign Remedies served us up a plate of “Slow Roasted Sunchokes, smoked onion, broccolini, Lion’s mane mushroom, black pepper, buttermilk” This was a pretty nice little bit of food, lots of things I would never have thought to put together, so clever.

I think it was deliberately bite sized so that you could see the kind of chic plate it was served on. It was probably expensive but looked like the kind of random old stuff that you give to the thrift store and then regret when it turns out to be worth some money

This was my first taste of the sunchoke, or so I thought, then I remembered that back in the UK we have different names and that we call these Jerusalem Artichokes (I then thought about it and no, I ain’t eaten those either). I wasn’t sure that I had eaten Lion’s mane either.

I have to say I really liked this dish. It is earthy and kind of real, and something I would never thing of ordering.  Stu told me that this is pretty much the Appalachian style of food, lots of foraging and making something good out of what you can find.

I think that the name of the drink we had was the Root daiquiri which is made from ‘aged rum, lime, sarsaparilla, burdock, dandelion’. That makes sense as it tasted like an alcoholic version of that bottle of dandelion and burdock that I used to drink in the pub car park when I was a kid. I am not a cocktail fan, but I liked this (actually I lie I like a cocktail but normally I don’t hunt them down) 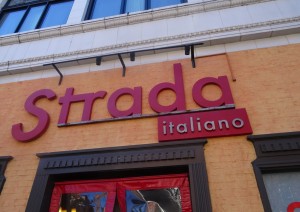 At Strada we were served up a Raviolo, a large single one that filled an entire bowl! I learnt something else new that the singular of Ravioli is a raviolo, something I didn’t really need to know as I have never had less that a whole handful. Having said that this one was so big I could not have eaten two! (someone at the table did try and he looked a bit stuffed after)

Officially the Raviola was a Grilled Florentine which had been boiled until just al dente and then seared briefly on each side on the grill. That gave in a kind of charred and chewy taste. Here at Strada they serve their ravioli on a bed of Arugula with a Sherry Tomato Cream sauce, a balsamic reduction, basil, and some Pecorino Romano cheese. 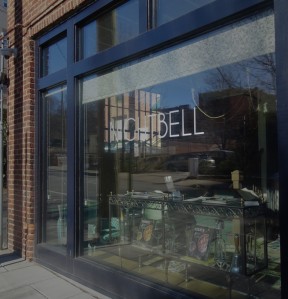 The “Devilled Egg” at Nightbell was one of my favourite bites of the whole tour, I eat a lot of simple meals so when I get something really ‘grown up’ and fancy I really have to sit up and take notice.

We were advised to dig our spoons deep and scoop up a bit of everything. I did that, then again and again, trying really hard to do that at a pace slower than ‘stuff this glorious bite down my face’. I think I got away with it.

Truly an amazing and excellent bite of food. It was worth taking the whole tour just for this bite, and it was fitting that it was our last bite of the stroll!

I have never really done a food tour before as a punter, but was so glad that I took this one. I was just a little sad at the end because I realised that Asheville has so much to offer and that I have so little time on this trip to sample it all.

I saw enough with Stu that I really want to come back some day to really spend some time here so that I can soak it all in, or rather so that I can scoff it all!

I took the Sunday tour Food Fan Foot Tour with Asheville Food Tour which they describe as:

“Food Fan’s Foot Tour – Well known local food writer, blogger, and podcaster, Stu Helm (aka “The Food Fan”) leads this walking tour of Asheville’s finest restaurants, cafes, breweries, & more! This unique, one-of-a-kind tour gives locals and visitors alike the chance to experience a variety of drinks and dishes along a 2 mile route of the Upper South Slope, Pack Square, The Block, and other areas of beautiful downtown Asheville. Learn some history along the way, hear a few local legends, and get the inside scoop on what Asheville’s most colorful food writer thinks. While with this Asheville legend, you will learn of his vast knowledge of the restaurants on your tour, visit with 2 James Beard nominated chefs and any and all of the food vendors in downtown Asheville. Friendly, yet edgy, funny and informative, Stu says his tour is “for anyone who wants to eat, walk, eat ,walk and learn a bunch of stuff along the way!”