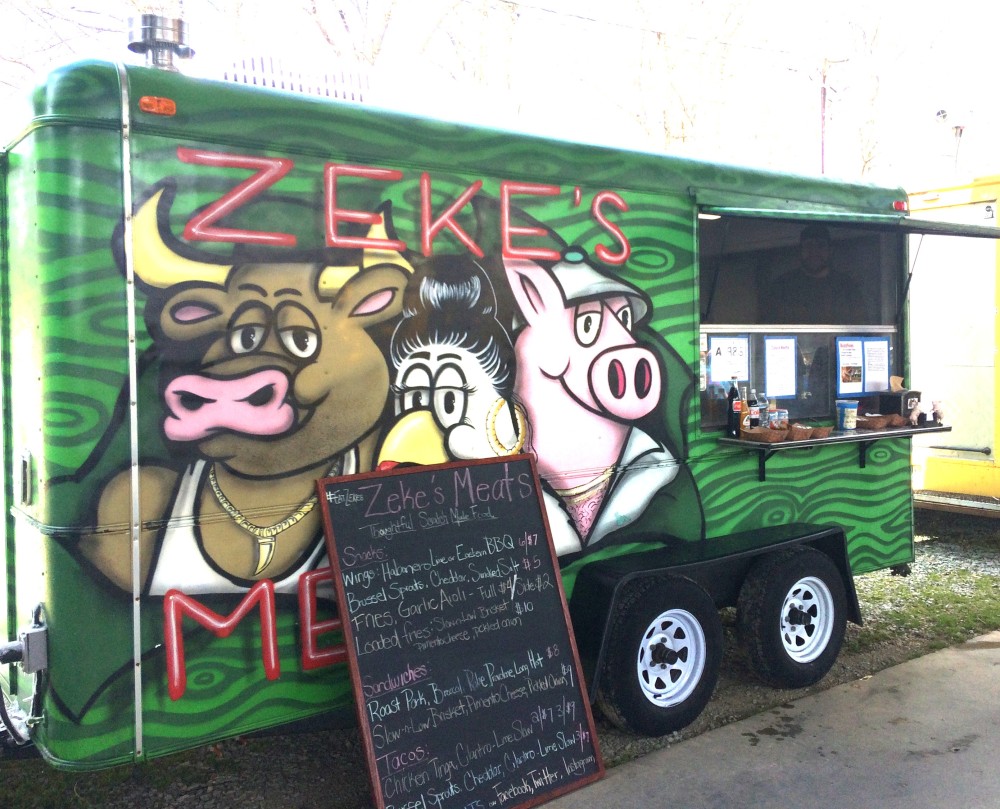 Zeke’s Meat Food Truck was in the line up at the March Durham Food Truck Rodeo, I had seen them out and about before in the area and read the promising tagline that “Philly style slow roasted pork sandwiches make Zeke’s Meats one of the Triangles go to food trucks!”

Mike from Runners Thoughts had seen these guys on WRAL (check that video clip here) and had it on his mind that we really needed to try them out. He even had the sandwich that we had to eat burned into his thoughts. I had no problem in making them our first food stop at the rodeo

I am always happy to take a recommedation

I was quite keen on trying the Slow-n-Low Brisket sandwich with Pimento Cheese and Pickled Onion which I understand is one of Zeke’s Meats best sellers, if not that I fancied the Loaded Fries which had the same ingredients on the top.

But Mike had an educated choice for us both and that was the Roast Pork Sandwich which came with Broccoli Rabe, Provolone, and Long Hot Peppers 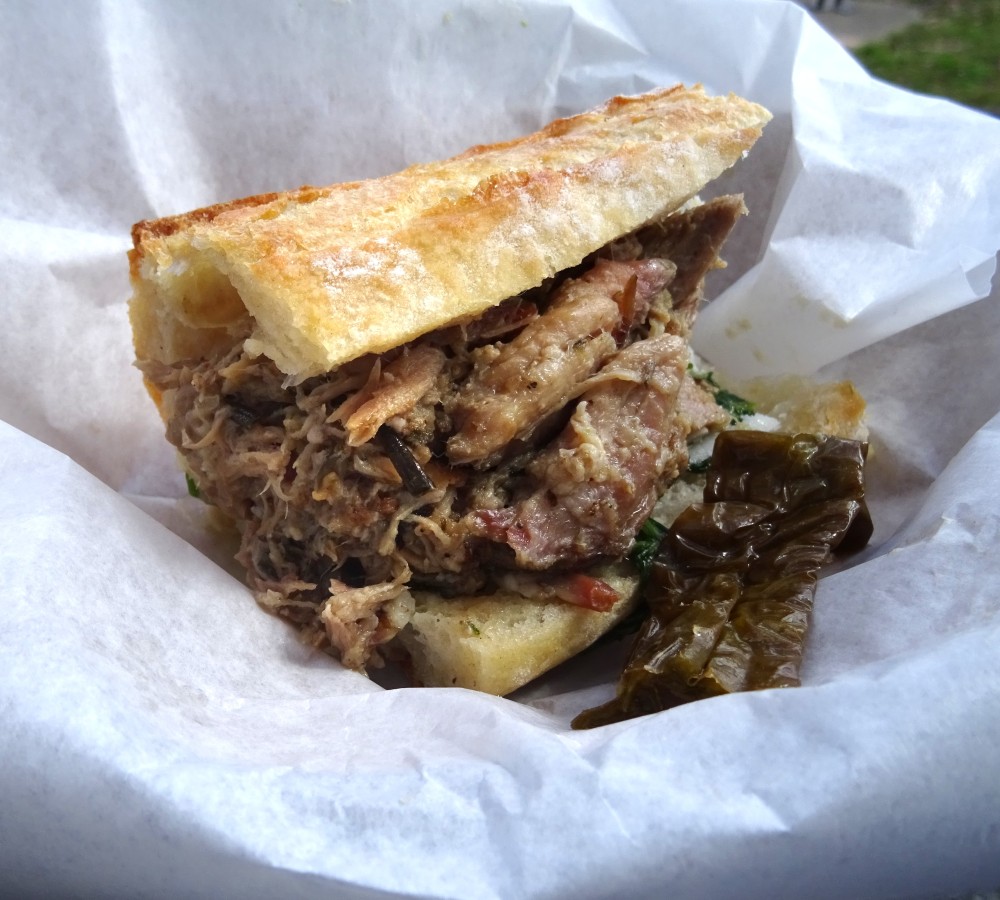 The Roast Pork Sandwich was as promised, pretty awesome. I could have eaten this all day long! The guys in the truck were pretty chatty and didn’t mind at all when we asked if they could cut one in half so that we could share. They said everyone does that and lets be honest at events like the rodeo the idea is to eat a lot of small bites so that you can try as much as is gluttonously possible 🙂 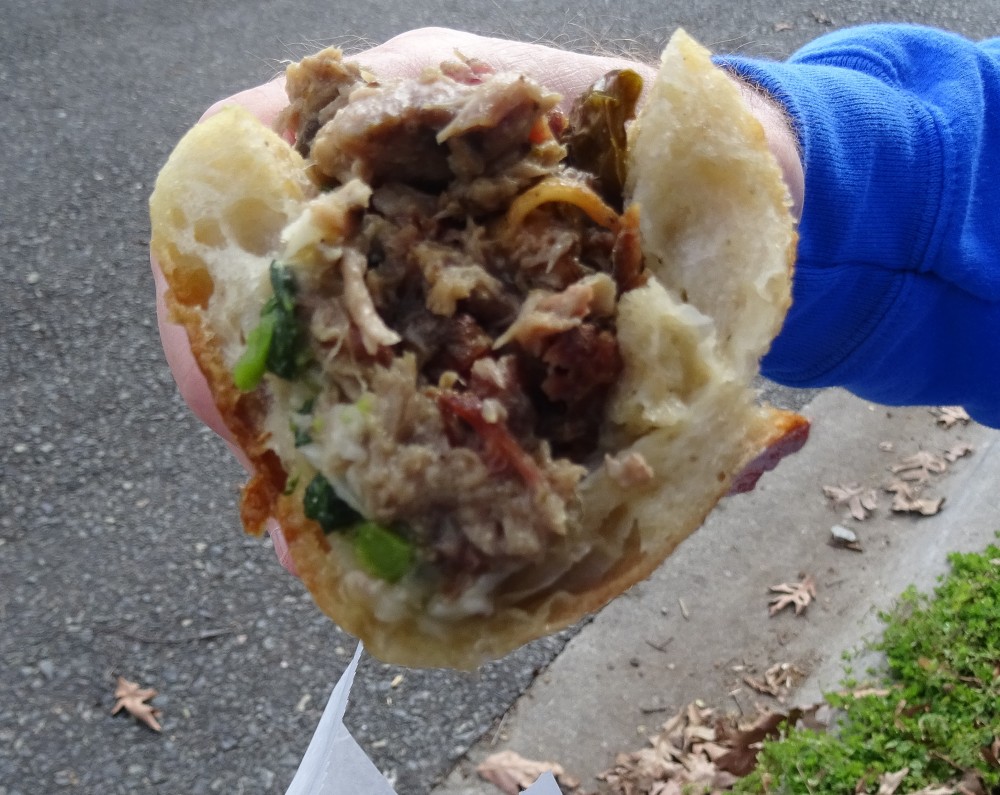 When you take a look (even this slightly blurred look) at the sandwich in cross section you get a good idea of just how packed out it is with that lovely juicy meat. You can also see that layer of green broccoli and some of the cheese tucked away in the base of the bite.

I can see why this sandwich is so popular, it really is made in that Philly tradition. It’s not a Philly Cheesesteak in any way shape or form but it has that Philadelphia style about it. The bread and the filling all meld together so that every bite is full of favour and not just one note either, you get a bit of everything and the whole package in each mouthful!

The meat is amazing, I liked the broccoli rabe which was soft enough to mix with the melted cheese to ‘almost make a sauce’. the tipping point, not mentioned on the board, is the addition of some garlic juices (hint: watch the video)

If you hunt down one truck and order one sandwich, then seriously I suggest that you just do what we did, simples!

Some days these MyFoodHunt trips are pretty easy! One meal chowed down and the joy that  I knew that we going to sample at least 4-5 more different lots of Truck Food. I even got the chance to stand Posing alongside the truck

Zekes’ Meats can be found all over the Triangle so just hunt them down!