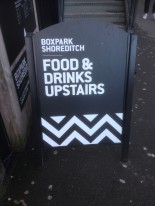 The Boxpark in Shoreditch is one of those places that might sound a bit naff but turns out to be a really clever idea. It is billed as a Pop Up Mall and is essentially a small shopping complex made out of stripped, refitted recycled shipping containers hence the name boxpark. It started life in 2011 and is supposed to be there for about the next four years. The Box Park website describes it as;

“BOXPARK is not some run-of-the-mall shopping centre. It’s a living, fertile community of brands packed with talent, innovation and attitude that puts creativity and fashion back where they belong: on the street.”

Well that is all very well but I had come down here on the overground to Shoreditch to eat at and to find BunnyChow which is one of the cafés and restaurants on the upper level of the park. I had read about BunnyChow a few times most recently in the January edition of Olive Magazine which was running a feature on different street food places to eat at in the country (Mainly London). All I knew was that it was some sort of bread roll hollowed out and filled with a tasty treat. The usual Wikipedia google hunt had told me that it was originally ‘a South African fast food dish consisting of a hollowed out loaf of bread filled with curry, that originated in the Durban Indian community’

That seemed to be the case when I arrived on the upper level at the central food court where the sign by the entrance explained to us that it was indeed a little loaf with the middle scooped out and filled with stuff, in their words ‘big flavours’. But what stuff? what could I get? I walked further into the container to find out.

The menu listed some filling items that made sense such as “Pulled Pork” and “Smoked Haddock Chowder”, but ‘Monkey Glands’? What are ‘Monkey Glands’ when they are at home?  Well according to the girl on the counter these are “Meatballs smothered in South African monkey gland sauce” but not made of actual Monkey Glands she insisted. Typically this sauce is made from chopped onion, garlic and ginger, and then a mix of chutney, soy sauce, mustard, worcestershire sauce, ketchup, and wine. I couldn’t get the Bunnychow recipe but it was probably along those lines.

The Monkey Gland Bunny Chow turned out to a quite delightful experience. The hollowed out bread loaf was filled with a good amount of small thumb sized meatballs in a tangy sweet chilli sauce. The real kicker is the crunchy topping of chopped peppers, chilli, spring onion and coriander that added real cleaning freshness to each mouthful that counteracted and gave a perfect balance to the chilli heat. It is not a really spicy dish but those crunchy toppings really gave a natural cooling element to each bite and transformed the dish elevating it beyond a bread bowl of meatballs in sauce. It is also a good crusty bread roll as well that makes the bowl. I didn’t eat it all as the dish is surprisingly filling, but the bits I ate where the sauce had soaked in were a real delight. I think I made the right choice from the menu here there was nothing to dislike and everything to like. It is a winner in my mind and in my mouth. I was very glad that I made the effort to find them.

Other newer flavours that are available include a ‘South African Bobotie Burger’, ‘Goats Cheese and Peppers’, ‘Lime and Chilli Crayfish’, ‘Nutty Citrus Chicken’ and ‘Feta and Pea’. All of which sound enticing but to be honest I really crave some more of that Monkey Gland sauce filled Bunnychow so it might be a while until I sample the others.

As I note I found Bunnychow at the Shoreditch Box Park in East London which is located right next to the Shoreditch Overground station on the upper level of the mall. There is also a truck roaming the city which you can locate through the twitter feed and the website, it is often found in places such as Brixton Market, and Rupert Street in Soho