This is Day 1 and Meal 1 in North Carolina 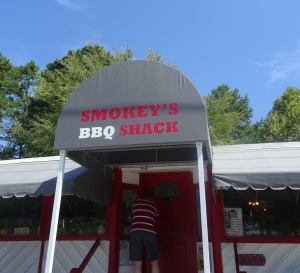 Smokey’s BBQ Shack in Morrisville, a small family owned BBQ shack catering to both ‘Eastern and Western BBQ styles’ was to be my first stop on MyFoodHunt tour in North Carolina.

I came here for lunch with my great friend Mike @RunnersThoughts who writes the excellent blog  ‘In The Moment Running’ as he knew that I really wanted to get down and dirty with some local BBQ.

Maybe he didn’t say down and dirty maybe he just thought that I would get a kick out of trying some local food, although maybe I did want to get down and dirty with the BBQ, and just wanted to type that a lot. Probably should edit all that, but lets move on and talk about Smokey’s 🙂 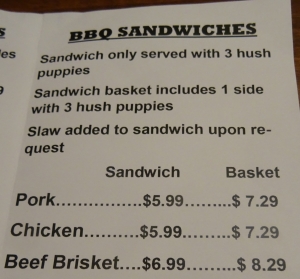 When you walk through the door of Smokey’s the waft of BBQ meat floats across the room and all you can think about is ‘give me meat and some more meat on top of that meat’ (well that was what my food brain was saying). I didn’t know what to get so was led by Mike, my experienced Smokey’s Shack co-pilot, who advised to get one of the BBQ sandwich baskets.

This looked to be great value as the sandwich basket comes with one side and an extra little bonus of three hush puppies (little fried mashed potato fingers). 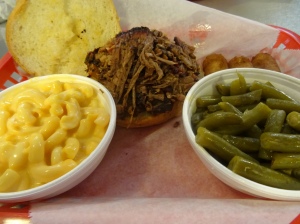 I had the Beef Brisket sandwich with a side of mac ‘n’ cheese for just over $8 and a side of green beans for just under $2.

The brisket came piled high on my bread bun, it was a thing of beauty to a hungry man. The shredded brisket was moist and juicy with lots of the crisp charred outside mixed in.

It had great flavour like an essence of smoky gravy that was just hanging on the thoughts of my taste buds.

The ‘sides and fixins’ that I chose were good because they were pretty tame and plain flavour wise and did not get in the way of my enjoyment of the Brisket sandwich which was the centre of my attention. I would have the mac n cheese again, (just because) but next time (if there is one) I will try one of the other sides instead of the green beans. 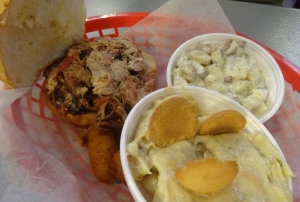 Mike had the Pulled Pork Sandwich with a side of potato salad and something called a banana pudding. The pulled pork looked amazing and I kind of wished that I had ordered the potato salad instead of the green beans. I wasn’t sure about a pudding as a side, I am too much of a savoury guy to mix the two, having said that it is a local speciality so I figure that our paths will cross again soon. 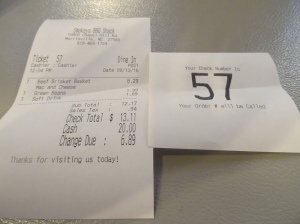 I knew it was going to go well when I was given ticket number 57 as this is my lucky number. 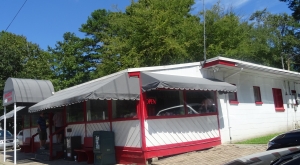 I have no idea where this place sits in the BBQ ranking league of the state, but I am looking forward to sampling a whole load more places to find out for myself

All I can say is that the place was packed out, the car park was rammed, and there was a line all the way to the door and it was overflowing to the max. I find that the crowds tell you everything that you need to know, where they go, I like to go.

I really enjoyed my first experience stateside of local BBQ and I am already looking forward to coming back. 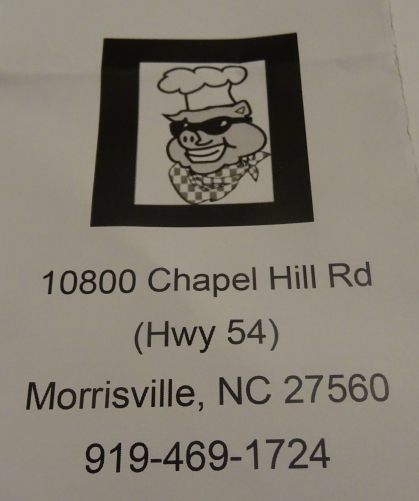