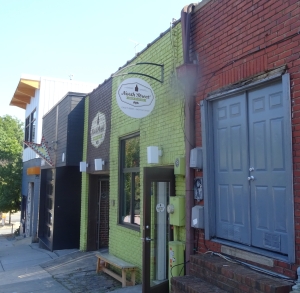 As I was walking down Greenwood Avenue in Raleigh on Friday evening I cast my eye down North Street where I saw a dimly lit doorway. In the distance I could see people sprawling out onto the sidewalk. In the shadows it looked like they were drinking beer from bottles and cans and plastic glasses. I figured this was worth exploring!

It turned out that I had found North Street Beer Station, a bottle shop selling beer on draft and a wide range of local brews to take home.

This was to be my first experience of one of these bottle shops.

Inside the Beer Station 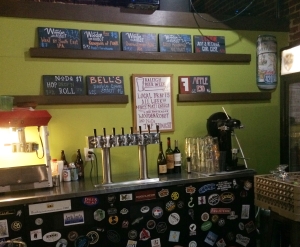 The place was buzzing gently when I found my way in there, I found a seat at the small bar and pondered my options. It was Raleigh Beer Week and they had a whole bunch of beers on tap, but it seemed to be all about the Wooden Robot brewery, and N.O.D.A brewery both from Charlotte and I really wanted something light and local. 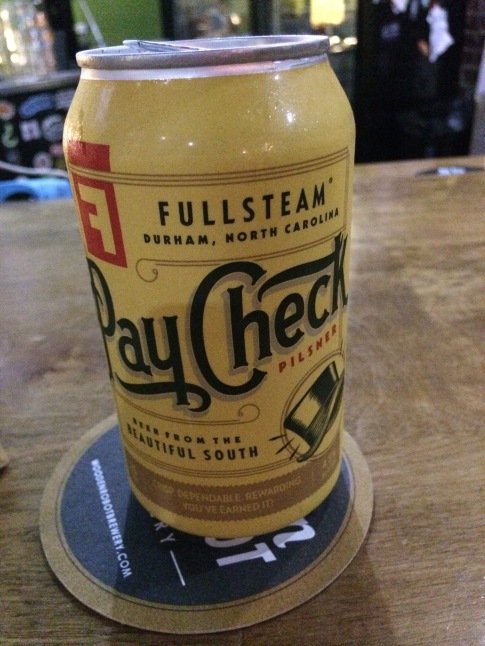 The girl behind the bar had all these lovely draft beers that she had tried to get me to sample but I wasn’t interested in a beer tasting of pineapple or of coffee. Maybe I should have tried harder. I guess she wasn’t that impressed as she just gave me a yellow can filled with Pay Check pilsner from the fridge.

Luckily for me I had bought some of these cans already from a local supermarket so was happy to have recognised something I knew. This beer comes from  Fullsteam brewery in nearby Durham and I really quite like this beer, so I was the winner in the end (I think).

(note I went back on Saturday to take pictures and to sample further, but that is a whole different story)