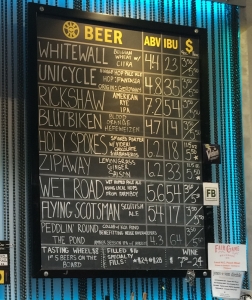 Crank Arm Brewery in Raleigh, North Carolina is located in the Warehouse District just over the road from Pit Barbeque (that will be my only mention of food in this post). I had this place on my radar as one of the microbreweries that I just had to try when I headed over this weekend into Raleigh with the intention of trying some local beers during Raleigh Beer Week.

I learnt that this place was the product of a kickstarter back in 2013 when the local team of Founders Dylan Selinger and Adam Eckhardt of the Crank Arm Rickshaw company teamed up with Michael Morris, “a 4-time Great American Beer Festival (GABF) winner” and a brewer “at several Raleigh area breweries, including Capitol Brewing Company, Big Boss Brewing Company, and Natty Greene’s.” I learnt this as I sat drinking my first beer in an excellent article written on BikePacking.com

There were plenty of clues around the place from the bikes on the wall, to the cycle gear on sale inside, and a whole load of cyclists locking up their bikes outside. But you know me, I missed all that as I just wanted a nice cold beer. Luckily I learnt all about it while writing this post! 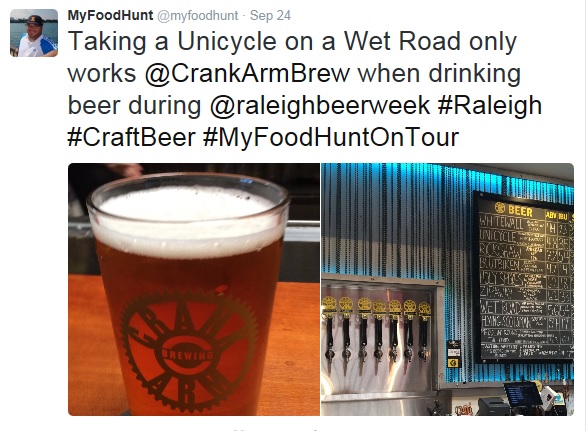 I plonked myself down at the bar in front of the college football on the telly and started the tough work of sampling some beers. I was already becoming acquainted with a couple of their beers trying both the Unicycle and the Wet Road.

Midway through my second beer I was joined by a lovely couple Gregg and Anne from Ohio, I had shuffled up a stool to let them get a seat and Gregg offered to buy me a beer, so it was to be that I ended up sampling both beers again as we talked all things from beer to cycling, Masterchef to Top Chef. I persuaded Gregg and Anne to let me buy them a beer too as we all stayed perhaps a little longer than we planned.  I love afternoons like this in a new city!

It was a lot of fun made even better as it was Raleigh Beer Week so we had every right to be sitting in a local brewery pub drinking on a hot Saturday afternoon (it was 92F outside!). 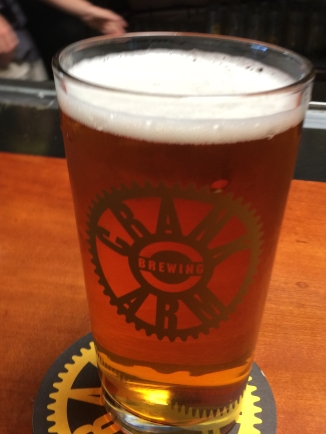 The Unicycle is described on the Crank Arm Brewery website thus “This refreshing American Style Pale Ale is meant to be both enjoyable and educational (to your palate). The malt and hop bill will stay constant during the year with one catch: Each time we brew we will feature a different hop for bittering, flavor, aroma, and dry hopping. This will let you taste the uniqueness of each hop. Make sure you try all the varieties!!”

I had one made with the hop Fantasia, which to be honest means nothing to me, I don’t think that it has anything to do with the Disney cartoon, so I googled it and on Hopslist it says that the hop brings a significant profile of fruit and classic European noble characteristics (note: Hopslist is not like a Craigslist for beer dudes – but maybe it should be?)

All I can say is that it is a very refreshing and tasty brew, I like my beers to taste like beer and not be too powerful, so this one was right up my street. It was as promised ‘enjoyable’, and I like to think that I was also ‘educated’ too 🙂 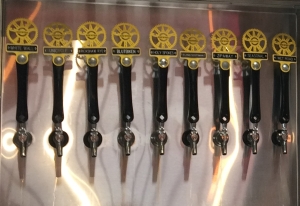 The Wet Road is one of their seasonal brews and on the Crank Arm website they say “We partnered with our friends at FarmBoy farms to get Cascade, Centennial, and Nugget hops straight off the bines for this hoppy one. We also used Simcoe hops in the boil and dry hop portion. This nice and light pale ale allows the hops to shine through.  Get it while it lasts, cause Mother Nature only lets us do this beer once a year.”

This is another really tasty beer, also light and refreshing but just a little bit hoppier, in a gentle way. It was very easy to drink, but from the sounds of it I need to make sure I come back soon if I want to be able to drink a few more of this one. 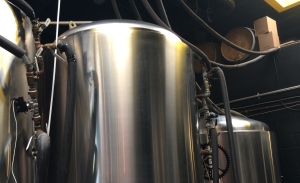 I really like Crank Arm Brewery, the bar is in a great open space which is light and airy, the people are really friendly and knowledgeable about the beer.

Most importantly the beer is Really Good. I am pretty sure that I will come back here again and will be bring people to help!

Their mission statement of sorts

Our mission: to provide fresh artisan beer and to support the cycling culture & community.