The Roast Grill was number one on my list of places to visit in Raleigh  NC to get a hot dog. I think it was the stories I had read about how it had been here since 1940 and how it had hardly changed during that time that really whet my appetite and piqued my excitement at the prospect of myfoodhunting this place down.

I read in an article on WRAL.com that;

“George Poniros and his mom, Freeda, run The Roast Grill in downtown Raleigh, NC. They’ve been serving the city’s best hot dogs with glass bottle Coca-Cola since 1940…yes, for 75 years.”

Once you have read that, well you just have to come and visit? do you not? 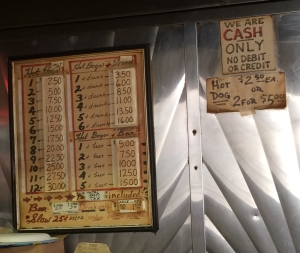 I took advantage, or rather I let myself be gently ‘fooled’ by the offer of one Hot Dog for $2.50 or Two Hot Dogs for $5. I knew what I was doing 🙂 but Lets be honest? a single hot dog is never enough to tell the whole story? especially when one can often chomp down a dog in just a few bites.

I asked for two dogs with everything ‘just as it comes’, I felt I should try them the way that they have been served for all those years.

As it happens ‘as it comes’ is a hot dog with a crispy charred casing topped with homemade chili (from a recipe apparently more than 70 years old), smeared with yellow mustard, and a pile of hand-chopped onions, all topped with a different type of slaw that has been marinated without mayonnaise. 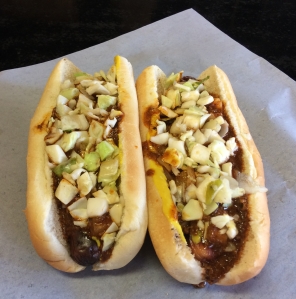 This was very interesting indeed! This my first real taste of a Carolina Style Hot Dog, and I kind of really liked it. It was a totally different food experience for me in the world of Hot Dogs, most certainly a good one though!

The Chili topping isn’t really that spicy, it is more of a creamy affair and it was so smooth it is like a meat gravy, I like that it is really yummy!

The crunchy chopped slaw was kind of good, much better than a mayo style slaw, the only downside was that it all fell off the dog quite easily as it had no firm grip.

Having said that,  I liked it as it meant I didn’t have to eat too much of ‘one of my five a day’, but you may want it all in every bite.

What about the dog? I loved the hot weiner as it was charred nicely and you could still taste that beneath the toppings, the bun was great too.

As predicted I managed to down each dog in about three bites. I also managed to smear chili on my face, and all over my hands too, this is a true skill in itself.

This was a fantastic introduction to the Carolina style Hot Dog!

Inside it is like going back in time and you really feel as if nothing has changed for years. I had a coke in a bottle and sat at one of the bar stools along the counter.

As I sat it was exactly as I had read on the web in that post on WRAL.com … “Freeda will get your drink, while George will ask you how many dogs and what toppings you want”

When I ate, I started talking and George clocked my accent and we had to have a chat about Brexit (you do these days don’t you sadly), but then we had a more cheerful chat about the time that Man vs Food came here and the time that they were featured in Zoo Magazine (If you are not from the UK you have to google that and I can tell you that George was so proud!)

Man Alive, I love the dogs but want to enjoy them or rather savour them so two is plenty for me!