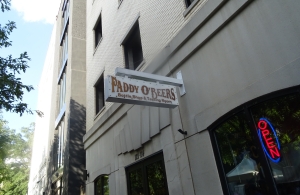 Paddy O’Beers in Raleigh is a ‘Bottle Shop & Tasting’ Room located up on Fayetteville St near to the State Capitol building. I have found myself frequenting this place on occasion as I check out the Triangle.

It is a pretty friendly place and they certainly seem to know and care a lot about the beers that they have on sale.

Their mantra on the site reads as “Good Beer. Good Times. Happy People.” Sounds good, as I came in here for good beer, to have a good time and to be a happy person! 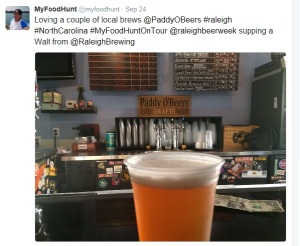 I first came in during Raleigh Beer week and ended up sampling a few local beers sitting up at their small bar where they have plenty of draft beers to try out. On that occasion I was trying a beer from Raleigh Brewing Company called “Walt” which was pretty damn tasty (and pretty strong too).

Walt or to give him his full name The Walter is a Double IPA with an ABV of 9% (that’s a lot!) described on TapHunter as “An intensely hoppy pale ale with minimal malt character, designed to showcase its strong hop flavors” I like it!

There is Plenty of beer to be purchased at this place and it is a lot of fun sitting up at the bar trying the different draughts and chatting to the people. As they say ‘Good Beer, Good Times, Happy People’

Paddy O’Beers is Located at