Jake’s Wayback Burgers over at Surles Court in Durham (kind of in Durham to be honest) is part of a chain of burger joints that numbers around 120 outlets in 27 States. They also somewhat randomly have restaurants in Argentina, Brunei, and Saudi Arabia. The chain started back in 1991 in Newark, Delaware and has grown quite a bit since spreading across the States. This is the first one that I have encountered on my travels and it is always nice to meet a new burger.

I have been here twice now, once at lunchtime when it was packed out and I had to wait 15 minutes for my Ghostbustin burgers special, and once at the weekend when I had my pick of tables and I waited just as long as it took the guy on the grill to flip my burgers.

On the weekend I came in pondered a while then ordered The Cheeesy Burger; 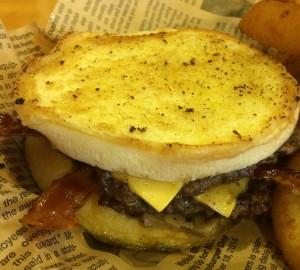 Cheeesy, one of their signature burgers, is a double burger in a grilled buttered bun with four slices of cheese. I customised mine with the addition of some crispy bacon and some grilled mushrooms.

The burger patty itself is great, I saw the guy grab a ball of meat,  that he then flattened out on the grill with a spatula, pressed down until crisped, grilled and then flipped.

It might be a bit thin but it was still juicy and tasty, it was that dripping with grease, but that added to the experience, is that OK? Not sure 🙂

I am not going to try and kid any one that this is a healthy gourmet burger, it is incredibly eatable though, a lot of unhealthy yumminess all packaged inside that bun!

Burgers are juicy, bacon is crispy, cheese is molten, grease drips down your arm,

You probably shouldn’t eat too many of these, but you probably will kind of want to 🙂

On my other visit to Jake’s Wayback Burgers, I came here a few weeks back on the hunt for the Ghostbusters Burger special. This was described as “the new Ghostbustin’ Burger – two all-beef patties layered with pepper jack cheese and topped with a spicy ghost pepper sauce – and side of Mac & Cheese Bites with Ghost Pepper Sauce. For a sweet treat oozing with gooey green goodness, its Stay Puft Slime Milkshake blends creamy vanilla bean ice cream with toasted marshmallow flavoring, slimed with kiwi lime sauce and topped with mini marshmallows”

I ordered everything on the list, to the surprise of both myself and the surprise of the chap on the counter. The burger was OK, I was expecting something a little bit more special, it was basically two thick discs of burger with some overspicy pepper sauce. If I am honest it wasn’t that enjoyable to eat. I am not even going to bother talking about the mac n cheese bites…meh

On the other hand I really loved the “Stay Puft Slime Milkshake“, I never really understood why people liked milk shakes until now. The blend of creamy vanilla bean ice cream with the toasted marshmallow flavouring was a very comforting.

There was something quite beautiful in the way that the creamy mixture caressed my gullet as I slurped it down (that sounds kind of rude when I read it back).

The ‘slimed’ kiwi lime sauce added a lovely citrusy element to the drink and I quite enjoyed spooning mouthfuls of those mini marshmallows from the cup.

It made me feel about 12, it was a good drink and helped get rid of the spicy pepper from the burger. I might even start getting milkshakes when I am out and about on MyFoodHunt sorties.

Even though there were a few glitches in my scoffing, I still kind of like Wayback’s and would come again if I was around the area.

If I am in Brunei, Argentina, or Saudi then I might try them out to see what they have done with the concept 🙂

Jake’s Wayback Burgers is located at