Dame’s Chicken and Waffles over at North Harrison in Cary is a go to kind of place.

I am no ‘expert in the world of Chicken ‘n’ Waffles, but have been told that Dame’s is the place to go to in the Triangle.

This particular joint has only been open for a few months, but the one in Durham has been drawing in the crowds for a while and is quite the local fixture and destination waffle house. So they must be doing a lot of things right

Mike @runnersthoughts and I came over here last week to see what it was all about. We were expecting just a waffle with some sort of fried chicken, the name of the place had given that much away.

As it happened it wasn’t quite what we expected, it was oh so much more,

it was a kind of weird yet wonderful culinary experience

The Inspirations Menu is full of unexpected mixtures of flavours, and things so unfamiliar to my palate.

I was on my back heel from the moment that I started reading. I was so far out of my comfort zone, that I was taking a seat somewhere in the back of Mikes comfort zone, I figured that  someone had to drive this menu and I wasn’t sure that my UK licence would allow me to get on the Chicken and Waffle Road.

I looked Mike in the eye and I think we mentally exchanged the words ‘lets do this’, it might have been ‘can we leave this is a bit unusual’ but we stayed so lets assume it was the affirmative

I have to admit that I was still on the fence about this combination of items. I like fried chicken of all kinds, and I am not averse to a waffle with some sort of spread, maybe maple syrup. I am not so sure about this idea of combining the two.

I must be the only one though as this place seems to trade on combining all sorts of flavors with the chicken. Just a quick glance down the menu finds ‘honey dijon’, ‘vanilla & almond’, ‘almonds and plum sauce’, ‘peach and apricot’ and many more.

What a Classy Hen?

I scoured the menu at Dame’s Chicken and Waffles and tried to find a more conventional mix, I ended up being sucked in by a combination called ‘What a Classy Hen?‘. The combination they were suggesting was “A chicken cutlet, a classic waffle, and a vanilla and almond smear”

What the flip? I changed the smear (fancy butter to you and I) to “maple-bacon” as that seems to go well on bacon and pancakes.

You know what? This was pretty good, I am not sure that I am totally convinced, but I am happy to sign up to the ‘Chicken and Waffles program’.  The whole plateful is massive, the waffle is like four normal waffles joined up into a big square. I added the maple bacon butter (the ‘smear’) all over it and the butter melted away into the holes to make a tasty sweet treat.

The chicken cutlet has a fantastic crust that is a little bit herby and has some sort of meaty tang as well. The chicken itself was still quite moist, not as juicy as I would like, but decent enough.

When it came to sides we both chose “Cheesy Ceci’s Mac & cheese”, to my mind this was a no brainer as I love me some ‘Mac n Cheese’. Our waiter suggested that next time we should get the ‘Mean Collard Greens’. Thinking about it now we should have got one of each and split it? Nah we made the right choice!

OK so as Mac and Cheese goes this version at Dame’s Chicken and Waffles in up there on the list! It has the stuff I like, super molten cheese over soft pasta. If I am honest I would like that molten cheese to be under the broiler for a few moments to give me a cheesy crust, but I know that I cannot have everything that I want.

The thing that makes this Mac n Cheese stand out is the herby flvouring that they add here. Is it rosemary? is it thyme? is it something else? we asked and they wouldn’t tell us. It also has some sort of sunblushed tomato in the bottom of the bowl (or does it?) just fishing for the recipe. Seriously though it is really good and well worth ordering. It also helps to take some of that smear sweetness away. 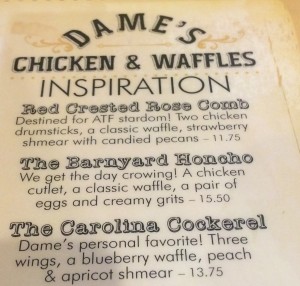 Other stuff I was curious about included “The Barnyard Honcho” that I almost ordered. This was (or rather is) a Chicken Cutlet, a classic waffle (just like I had), with a pair of eggs and creamy grits. I held back when I found that the grits was a side and not on the plate, but I did kind of fancy those eggs so that the runny yolk would make a lovely sauce on my waffle. Maybe another time?

Dame’s Chicken and Waffles is certainly locally famous. I think I would enjoy a more down and dirty traditional chicken and waffles more.

Don’t get me wrong, it is really good, but I just don’t understand the concept. Having said that, am I coming back? Hell yes, as I said, it’s like ‘weird but wonderful’ and you just have to try it out!