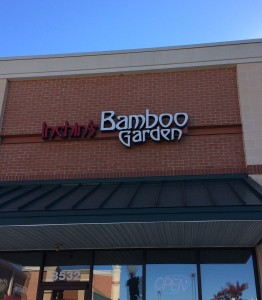 Inchin’s Bamboo Garden in Morrisville, North Carolina is part of a small chain of restaurants serving up an eclectic mix of Chinese and Indian food. On their website they say that the food is inspired from the foods of Calcutta which is interesting.

When you read their story it makes a sort of sense:

“Chinese people migrated to India in the 18th century to work in the ports at Calcutta and Madras. Since then their influence has been substantial and have made Calcutta their home.

It is therefore no surprise that Chinese cuisine is a part of main stream in Calcutta and has since spread to all parts of India.”

“Inchin’s is a combination of the words Indian and Chinese. This truly describes our cuisine.

Since Calcutta played a very important part in the development of Chinese cuisine in India, it is here that our food is inspired from.”

So if I understand this correctly? Inchin’s is a kind of Chinese Restaurant that you would find in Calcutta, India? that has been transported to the USA? Well that is a concept of sorts? at a stretch 🙂

I have been in a couple of times once for lunch and once for dinner.

I have enjoyed both visits and I like their take on these cuisines.

Lets see what we ate 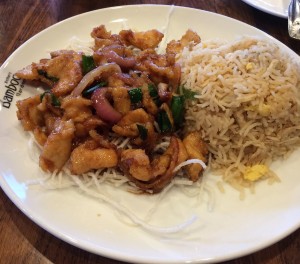 The lunch menu  seems to give really good value!I mean you can get a veg, chicken, lamb, or fish dish … with rice. … and soup! … and a soft beverage! for between $7-8.

I chose the Mongolian Chicken described as “White Chicken, Caramel, Onion, and Crispy rice noodles” and to go with that I had the choice of a number of rice dishes.

Normally on such deals they offer you steamed rice, or sometimes fried rice, at an extra dollar, but here they offer up things like Chicken Fried Rice which is a lot more exciting!

I was surprised to get rice with the chicken as the Mongolian style chicken comes served on a bed of crispy noodles. This is a bit of a strange combination but it kind of really works. The crispy fried bits of spicy chicken mix well with the slightly crunchy red onion and the caramel with the crispy noodles is a sweet spicy gooey treat. It is not really spicy, but just enough to temper the sweetness and make it a dish that can be called savoury.

I was happy to order this as part of a $7 lunch, I am not sure that I would be that bothered about getting this as a main dish in the evening as that costs $14.

The chicken fried rice was a nice touch as well, bit boring on it’s own, but more interesting than plain white rice.

It’s great value for lunch, but I would not pay $12 to have it as a dish on its own from the main menu. 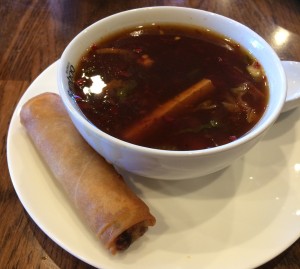 The Hot and Sour soup was interesting, the broth was nicely developed with some flavor, mostly of soy and rice vinegar, and there was a reasonable amount of chili heat in there as well.

In comparison to other places I have tried there was less stuff in the bowl, and there was a lot of those annoying bits of dried ingredients that get stuck in your teeth.

The soup came with a small slightly soggy cigar shaped spring roll alongside on the plate.  I think that was there more for decoration than anything else, it was a nice touch though and I did eat it

I still liked this soup though as it was a bit different from many of those boring efforts I get served on occasion on my travels. Hot and Sour soup is one of my favourite soups and this one is not too shabby! 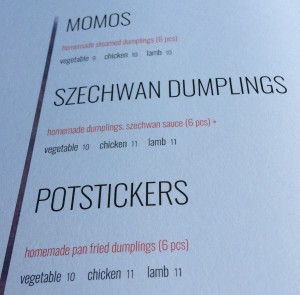 On my first visit here I came specifically to get Dumplings. The words ‘Potstickers’ and ‘Dumplings’ had grabbed my attention when I had walked by a few days and looked at the menu in the window. I had just visited Georgina’s Pizza (which is next door – read about that here) and was looking to see what else was in the area.

Now normally I would have been ‘all over’ the potstickers, which I love. So much so that I have learnt to cook my own (check that out) and I also would have had the ‘homemade steamed dumpling’ another favourite (check these posts out:  ) 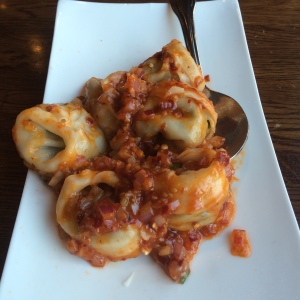 This was a pretty food decision as these Dumplings are quite a bit different to those that I normally eat. The dumpling itself is really well made and the casing is cooked perfectly. The chili sauce that is poured over it was a little bit on the spicy side to be comfortable. I did like them but 6 were too many for me to eat, I just managed 4 of them.

I think it is because, just like the soup they leave a lot of the whole spice and dried chilli on the plate. They are worth trying to share, but again it’s like $10 for a starter. 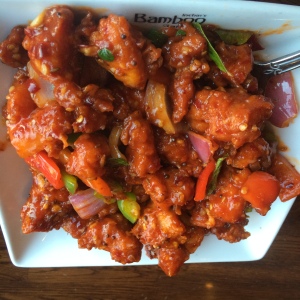 Chicken 65 is one of my all time favourite snacks,  I first found this dish while living and working in Hyderabad in India where we had it quite often as a bar snack. Legend has it that it originated at the Buhari Hotel in Chennai in 1965 and was simply added to the menu as Chicken 65. In later years other chicken recipes were added to the menu such as Chicken 78, 82 and 90 (read more here).

In essence this is  “Chicken breast fried and marinated with ginger, garlic and pepper chutney”. In Hyderabad we had it on the bone, but I kind of like it as little nuggets of chicken breast, as it is much easier to eat. The version here at Inchin’s is a much more elaborate version that the ones I ate in India, and also at $10 is way overpriced, I cannot imagine any man on the street paying that in Calcutta 🙂

Pricewise I found that the lunchtime specials at Inchin’s are much better value, actually really good value, when compared to the evening prices which are to be honest a bit steep in comparison.

Having lived and worked in both countries I cannot say that they are rustic or authentic, but as an Americanised or sanitised version of the dishes they do a pretty good job and certainly seem to serve up a better rendition of these cuisines than many places I have tried in the States. I am not sure who they would cater to in India, maybe the sort of people who dine at Connaught place these days.

Even though I say that, As I dined, I saw many tables filled with both Indian and Chinese families and groups, so they must be doing something correct. After all it is nice to get a more upmarket version of those street food faves and classics on occasion.