Poogan’s Smokehouse on East Bay street in Charleston, South Carolina provided one of the best meals that we had on our road trip across the Carolina states.

It was a pretty fortuitous find as well, I had spotted a different BBQ restaurant earlier in the day and that evening as I peered at the ‘to be unnamed BBQ spot’ a group of locals told me to head around the corner to Poogan’s if I wanted a really good meal.

I love it when I am out on a MyFoodHunt trip and I get this sort of on the spot recommendation! so I headed over pretty damn quick smart to check the place out. If I met those guys again I would most certainly be buying them a few beers to thank them.

It was to be a great find! let me tell you a little more about what we ate 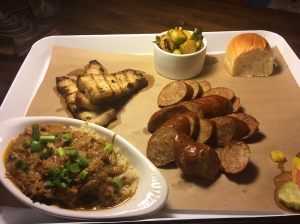 For my meal I ordered the Double BBQ Combo of Pork Belly and Smoked Sausage, this came with two sides. I chose the ‘Hash and Rice’ (an incredible side!), and under advisement from our waitress, I also had the ‘Bacon roasted Brussel sprouts’ (it was OK)

This was ‘way too much food’ for just one man, even for really hungry man. It might look smaller on the tray as the huge bowl of Hash and Rice does not help the picture perspective. I swear that I had almost a whole smoked sausage link, and I had three hand sizes pieces of Pork Belly.

The Pork Belly on its own was amazing and I mean AMAZING, I love it. It was just as I like, lots of soft white fat around excellent smoky pork that was cooked to perfection. I know that some people like their belly with crispy fat, but I myself love it when it is all creamy and decadent with a super soft mouth feel. It was hard to know just how they get this so good, I mean the edges are crispy and charred, the meat is super tasty, but that fat is like butter, hashtag awesome.

The neverending smoked sausage was also a star on it’s own and I was glad that I let it out to play. I suspect that many times it is overlooked in favour of the crowd pleasing ribs, wings, and pulled pork, however I love a good meaty link and this was something that I had on my list to hunt out as I sought BBQ through these states of the Carolinas.

Luckily for me, my first hunt brought me the goods on the plate, straight to my front door, so to say.

This combo plate was $21, I can only begin to imagine how much sausage and pork you get if you have those on their own, as each of those as separate plates cost $16 and $19 dollars respectively. Wow I can only feel slightly scared or perhaps kind of ‘Man v Food’ titillated at the prospect of what I might encounter.

The ‘Hash & Rice’ is amazing in itself and I will tell you more as I describe the next dish that we ordered, since it is a key component to the story of that plate, and I cant tell the same story twice 🙂 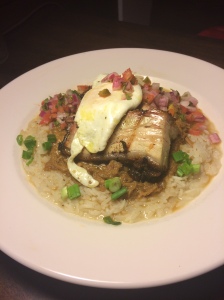 The ‘Hash, Belly & Bird” at Poogan’s Smokehouse is a bowl of hash & rice topped with a ‘Sunny-side farm egg, grilled pork belly, and dollop of ‘pico de gallo’

I was reading an interesting interview in Eater where Daniel Doyle, the executive chef at Poogan’s, talked about how this dish came about, he describes how it was a ‘happy accident’ where  one of the chefs was seen eating a bowlful for breakfast every Sunday brunch, once they all caught on that it was amazing, they put it on the menu. I love stories like that and I think we heard something similar from our excellent waitress who said that the hash was loved by all at the place.

I kind of knew that this was going to be an amazing dish as it was made up of the Hash and Pork Belly, two of those fantastic items from my Combo plate AND a fried egg with a soft runny yolk. Heaven on a plate is what I was thinking. It turns out that I was quite correct in my over effusive expectation and praise for this plates combination of food stuff.

The ‘Hash & Rice’ is amazing in itself, as I understand they take the burnt ends, the edge bits of the meats and all the lovely juices from the BBQ tray and make a meaty gravy, that then gets reduced a while until it turned into a thick meaty sauce and is then poured over Carolina gold rice. It is truly awesome and I can see why they put this combination as a solo menu item.

It gave us thoughts of our own as to how we can transform some of our own home cooking, and that is the true testament to a great meal, when you can take away an idea for another day to create a great story of your own.

Some other Menu Items

At Poogan’s the Menu was filled with lots of other stuff that I really wanted to come back and try ( If I ever have the chance is a question in itself). I LOVE a burger! and the concept of a ‘Wagyu Burger with bacon, egg, and pork belly’ floats my boat.

I am really quite curious and keen to understand this whole ‘grits’ thing, I have tried it before but I am not sure that I have had the best that the south has to offer yet, so I would have been keen to try Poogan’s ‘Shrimp and Grits’.

If only I lived in Charleston

Let’s not forget the Sides 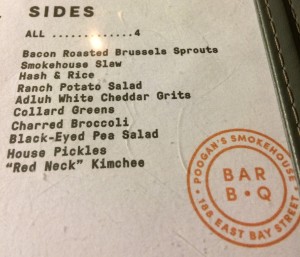 The best side I tried was that ‘Hash & Rice’, and seriously that should be a dish on its own! the meaty gravy is to die for. I also had the ‘Bacon Roasted Brussel Sprouts’ and they needed more bacon, but I don’t like sprouts so ignore my thoughts.

To be honest I really wonder, who does eat the sides anyway when you have all this fantastic BBQ to eat? Just stick a bit of salad in the corner, or perhaps draw a box on the paper lined tray and label it ‘meat free zone’, no-one has the room to eat all this fantastic food, so stop making me feel like I have to choose who to leave out from the part on my plate!

Just kidding, pile it high and overwhelm me as much as you can, it is all one massive non-guilty pleasure!

BAR-B-Q menu (just for the record) 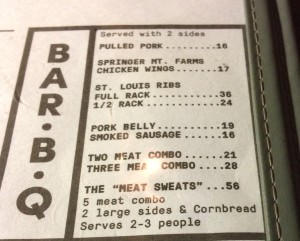