We chanced upon East Bay Deli on, well East Bay Street in Charleston as we walked back downtown to the Historic Downtown from the Aquarium Wharf after a boat trip around the harbor bay. It was a shining food oasis on a back street that was a most fortuitous find in that moment as our stomachs rumbled.

East Bay Deli describe themselves as “a New York style deli but with a distinctive southern flair“, apparently ‘their dessert case is full of giant cakes and cheese cake shipped directly from Carnegie Deli in New York City’ and on their website they tell us that they have been voted ‘best deli 13 years in a row’

Anyway what does all that matter? It was a sunny day, they had seats outside, and it looked like a pretty good place to sit a while and eat a sandwich. So we did! 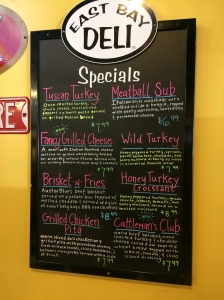 East Bay Deli has a pretty extensive menu that includes a lot of great options, if I was too cast my eye down the list I would have several things to pick out that I would have loved to have tried such as “The Piggy Potato” from the ‘Giant Spuds’ section, this is a potato topped with ‘Southern style BBQ pork topped with BBQ sauce’.

Other things catching my eye were “Pete’s Famous Chilli Dog” which is a ‘certified Angus Beef hot dog with chilli, diced onion, slaw and mustard’ #CarolinaStyle, that looked to be tasty and messy!

I also fancied the ‘Rajun Cajun’ which was basically ‘Cajun Turkey on Texas Toast with provolone cheese, lettuce, tomato and Spicy Creole sauce’ that sounded real good as well.

But as it happened on this day they also had a Specials chalkboard, which had so much of the good stuff on it, that we just felt that we really had to choose from the board.

The two picks of our day were from the brisket family:

The first being the simply named “Brisket ‘N’  Fries” and the second being the somewhat less obvious brisket combination called the “Cattlemans Club”. 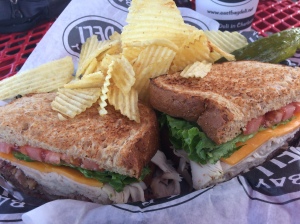 The Cattleman’s Club from the specials menu is a sandwich made up of two slices of toasted wheat bread filled with a bountiful amount of ‘warm beef brisket’ and ‘oven roasted turkey’. The meats are topped with cheddar cheese, lettuce, tomato, and a generous smear of 1000 island dressing. It came with a side of crinkle cut chips and a big green pickle. 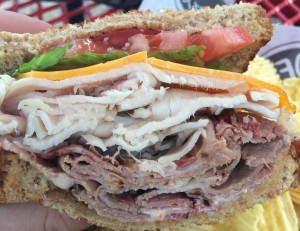 It was great to see so much of that meat piled inside the sandwich, I really enjoyed the warm brisket, but it was a bit strange to have the cold turkey meat with it. I liked that there was not too much salad, so that the meat was the star. I would have like more cheese, and it would have been really nice it that cheese had been melted.

All in all it was your basic deli offering and was a fair sized and filling sandwich for $7.99.

The second sandwich we had from the Specials Board at East Bay Deli was the  “Austin Blues beef brisket” which came served on a potato bun topped with melted cheese and served with a side of Baby Rays BBQ sauce and fries.

OK so there was a lot of great meat and the potato bun is always a winner as it has a topping of melted cheese. I can still recall how good that combination is, just as if it was some sort of food memory burned into my brain.

Sides wise the fries were kind of decent and as I am a bit of a sucker for the frozen crinkle cut potato treat I was quite happy. The sprinkling of some kind of Cajun spice on the top does gets in the way a bit, but it was still a nice treat (if a bit salty)

This was also a really good sandwich, perhaps a little pricy at $8.99, but nonetheless a jolly decent effort for a couple of tourist types enjoying a bit of a deli experience.

East Bay Deli is part of a small chain of outlets stretching across South Carolina in Charleston, Myrtle Beach, Florence, and Mt Pleasant. They say that they have been voted number 1for the last 13 years, now I cannot verify my opinion on the validity of that claim, but having eaten in many New Jersey and New York deli’s I would say that they were doing a pretty good job.