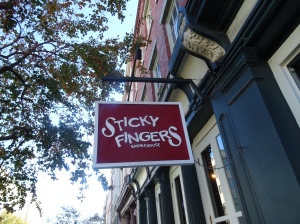 Sticky Fingers Smokehouse on Meeting Place in Downtown Charleston is one of a small chain in the Southeast serving up Memphis Style Barbeque. We found ourselves here by accident as we were looking for lunch on our first day in Charleston. When I walked in I didn’t know it was a chain, I had just been sucked in through the doors by the words BBQ and Smokehouse. I recall that we were also very hungry indeed.

Now don’t get me wrong I have nothing against chains, it was just that I had been hoping to open our Charleston food account with something unique. There were the usual signs in the window and on the wall telling us about all the ‘famous’ people who liked to dine here, so I was open to the upcoming experience 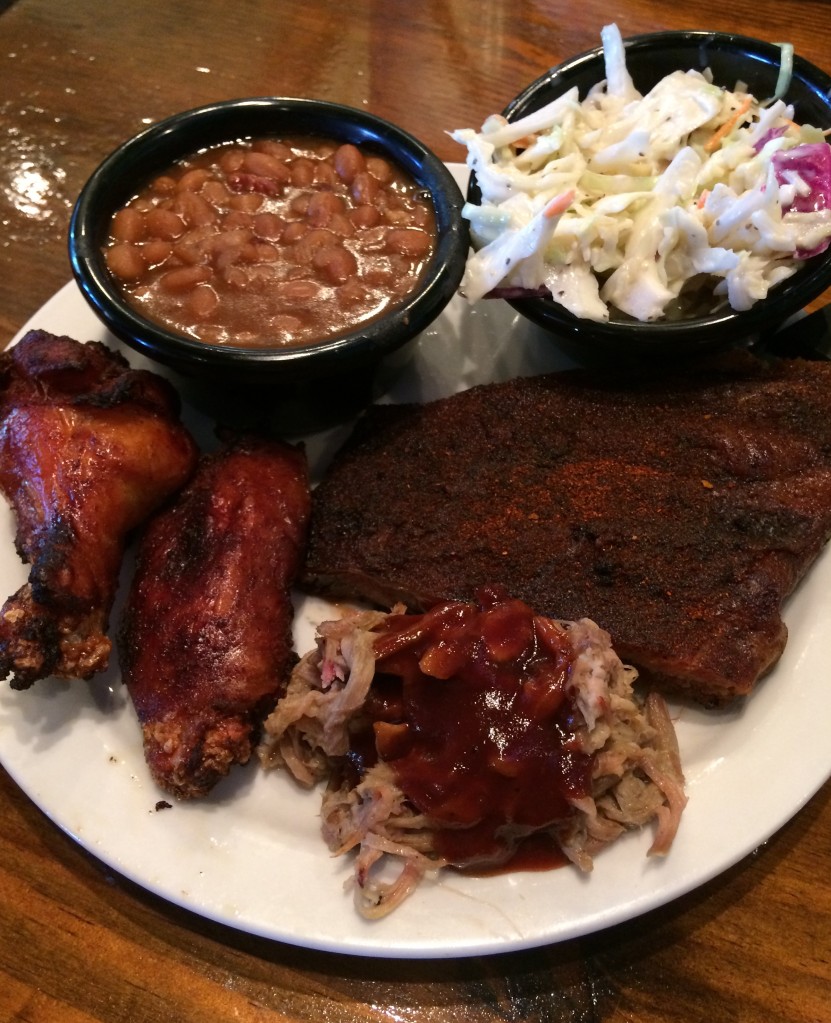 I had the ‘Signature Sticky Sampler’ which was described as being “Two hickory-smoked wings, ribs, and two ounces of pulled pork, served with barbeque baked beans and homemade coleslaw”.  It was interesting, I enjoyed eating it and it was better than most of the places in the UK that try to pass themselves off as BBQ places. I have eaten much better BBQ though on my travels across the  states, but hey can it cook better? Who knows so maybe I shouldn’t be passing judgment. I am good at stuffing my opinionated gob with food that I pay for, so maybe I should stick to that.

The flavour of the hickory smoked wings was pretty good, I did get a bit of smoke and the skin was nice and crispy, which I liked. The meat was a bit lacking in juice, but they were a nice bar snack nibble. I quite liked the dry rub on the ribs and I liked that the meat fell off the bones, I would probably eat them again, but I wouldn’t enter them into any ribfest competition.

The 2oz of pulled pork was a fair effort, it needed some sauce and it was I suppose lucky that they had already dumped a big dollop of some sort of sticky BBQ sauce on top. If I am honest I would have liked to have been able to add my own choice of sauce from the ones they supplied on the table.

The BBQ beans were not unpleasant, maybe a bit sweet, and the coleslaw was on the plate too.

All in all, it wasn’t my favourite ever BBQ platter, but it was a reasonable meal and it filled a hole in my stomach and set me up for a stroll around downtown. I was glad that I came in to try them out. 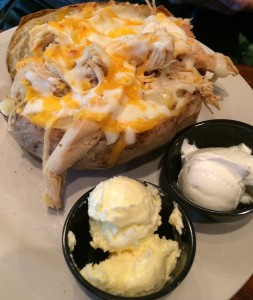 The other meal we ordered at Sticky Fingers was a baked potato, or as they called it ‘Our Original Stuffed Spud’, although I am pretty sure that they didn’t invent the concept of a jacket potato with a filling, but we can let that go I guess, after all it is hard to make a Loaded Potato sound exciting on the menu.

The verdict was that ‘it was a really big spud’ and that it was quite a comforting meal. In terms of whether the pulled chicken and BBQ sauce was a good addition to that spud was a question. It didn’t seem to taste of that much, but if you like a big cheesy potato with a mix of chicken salad, then this might just be for you.

The ‘House Salad’ was a pretty fair effort as it had lots of salad things on the plate, I liked the croutons and it was nice to have a little bit of green crispiness on the plate. I wasn’t sure what the pot of dressing brought to the table, but you know I am the kind of guy who usually declines the house salad anyway, Especially in a BBQ joint when I really just want more meat.

I do appreciate the whole ‘complimentary soup or salad’ offering though, I usually pick the soup, but nonetheless it is a nice gesture and often makes for good value 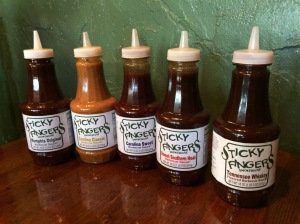 This particular Sticky Fingers is located at

“Our barbecue restaurants span Florida, the Carolinas, and Tennessee. And not to brag or anything, but they’ve been visited by some pretty legendary folks—like Bill Murray, Tom Brady, Jerry Seinfeld, KISS, Kyle Petty, Martha Stewart, and even George W. Bush.”

So have I now!, I have also been to other places 🙂