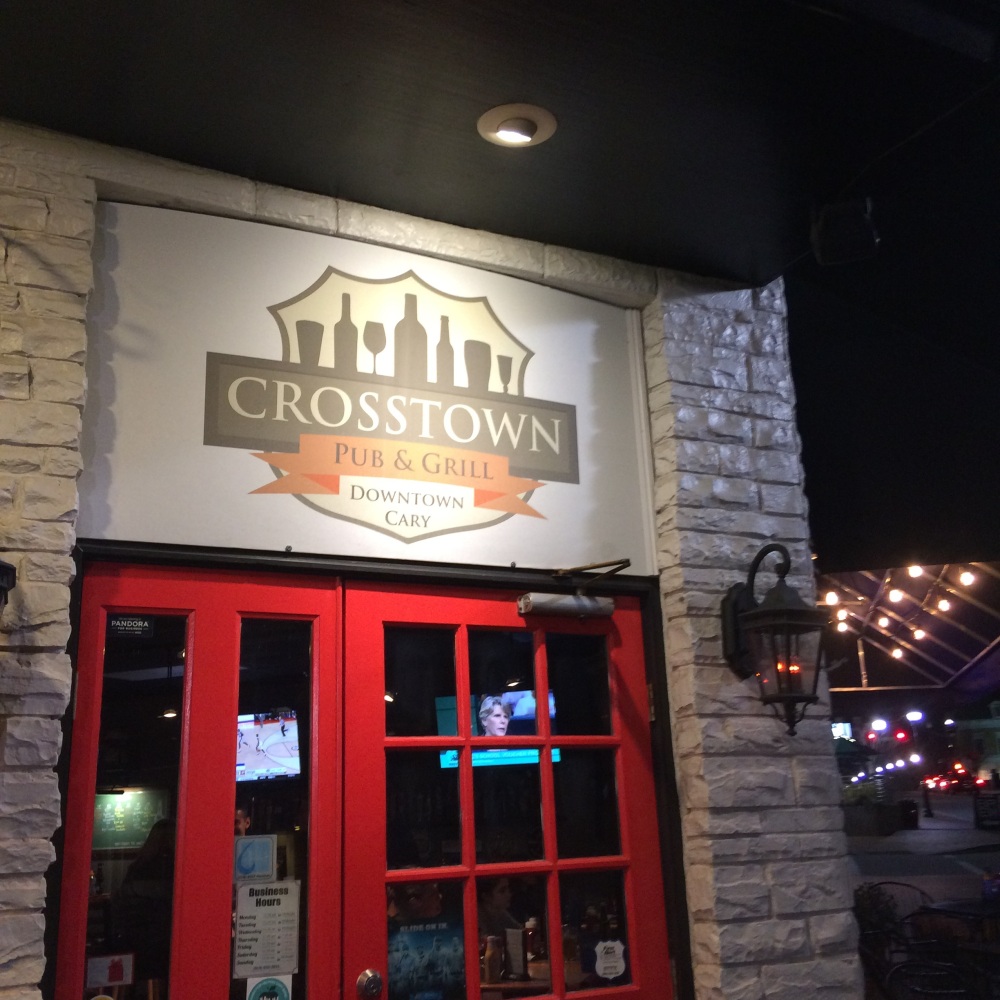 CrossTown Pub and Grill in Downtown Cary is located right in the centre of the action on East Chatham Street. Family run and owned, it is a pretty friendly place and seems to be one of those spots where everyone knows your name. I have been in a couple of times and sat up at the bar for a few beers and a bite of food and have always had a nice welcome.

They have a really great selection of local beers on Tap including many of my favorites breweries, to name just a few: Wicked Weed from Asheville, Bond Brothers in Cary, and Lonerider Brewing Company from Raleigh. They also seem to have a load of daily deals, on Saturday all local NC pints are $4, which was great news for me as I got to sample a few of those beers that I like. 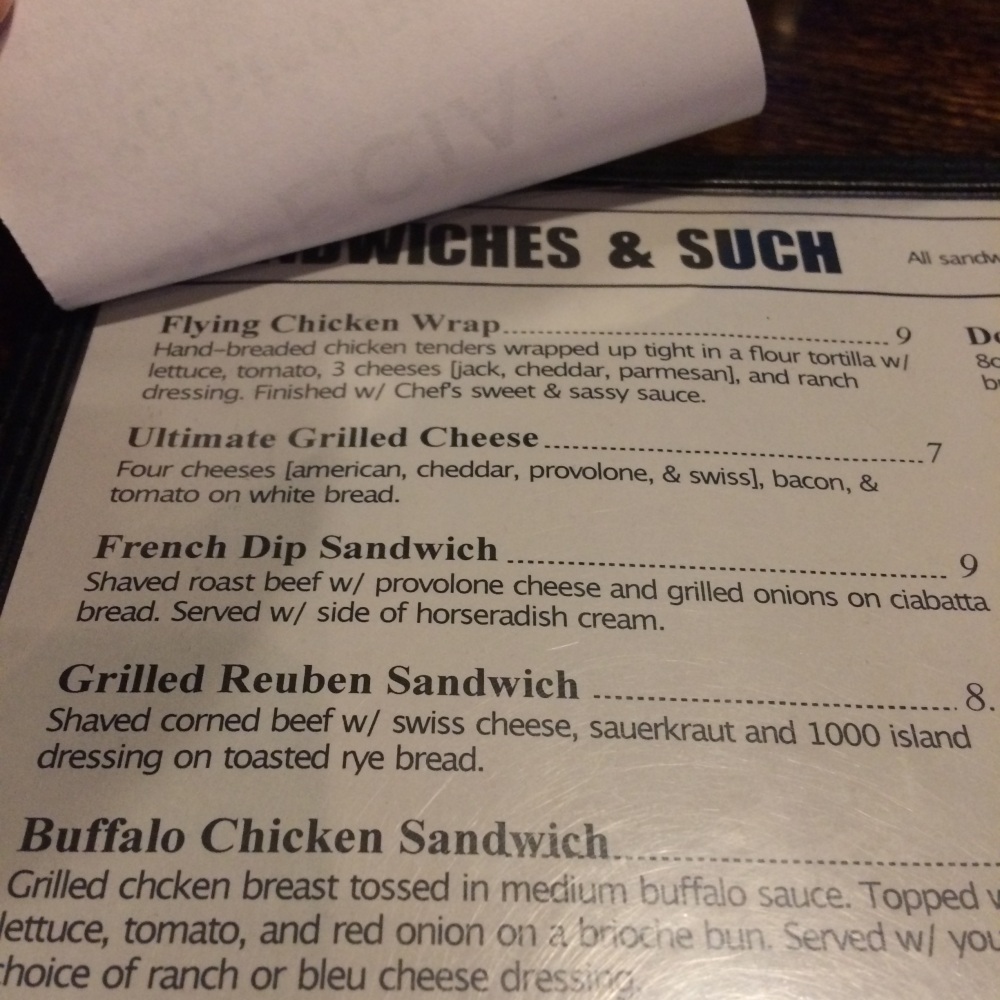 The Menu at CrossTown is an interesting one, they have quite a few of your pub classics like your battered fish and chips, but they also have a lot of different dishes that I don’t see everywhere in USA pubs as I travel around. I think they have a lot of Southern Pub classics, that I really need to start trying instead of my tried and tested go to dishes.

One of those is the “Fried Green Tomato Sandwich” which is ‘2 green tomatoes, freshly breaded and deep fried. Served with homemade pimento cheese and lettuce on toasted white bread’ which they have on offer for $8

I probably should have tried that, but if I am honest I just needed something simple and comforting to soak up some of that local beer that I was supping. It was with that goal in mind that I ordered the Ultimate Grilled Cheese.

The Ultimate Grilled Cheese at CrossTown Pub and Grill is described on the menu as “Four cheeses [American, Cheddar, Provolone, and Swiss] bacon, and tomato, on white bread”. I chose to get mine with a side of fries.

I like the bread, it was light and soft inside but still had that nice crisp toastiness on the outside. I liked the really crispy bacon, and I liked the mixture of all the four cheeses which combined had a great creamy flavour. If I am honest I would have liked it if the cheeses were a bit more melted together, perhaps just a few more minutes would have worked for me,  but that is just how I like it.

I still really enjoyed my sandwich as it fulfilled all my needs of being both comforting, tasty, and filling. It was pretty good! 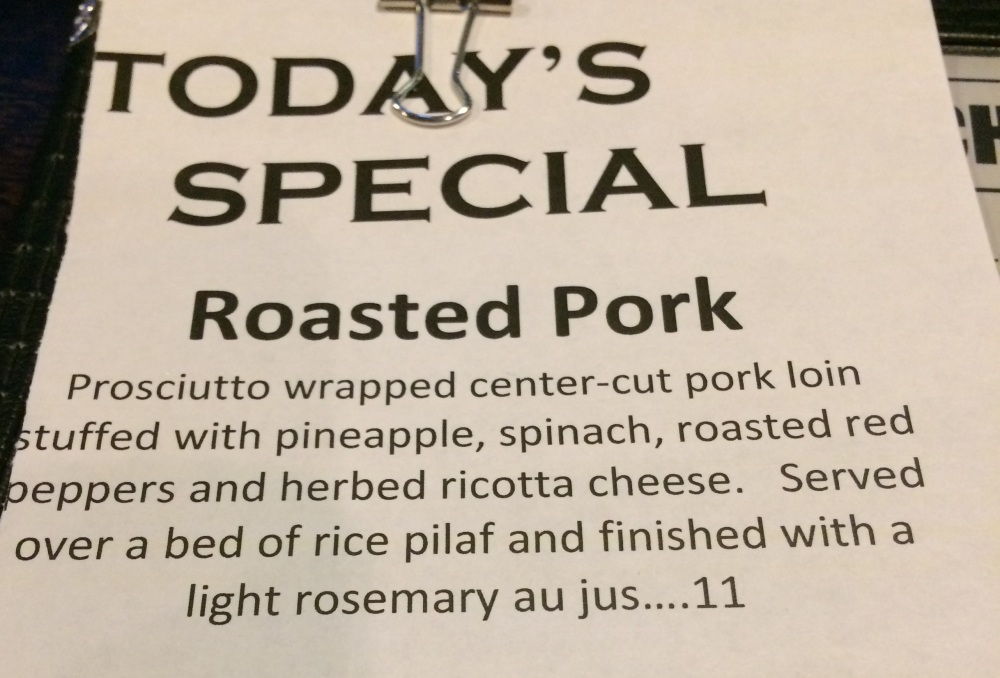 It doesn’t seem to be just Pub Food that they serve at the CrossTown Pub and Grill, the special the day I was in was a Roasted Pork ‘Prosciutto wrapped center-cut pork loin’ sounded pretty fancy to me.

I can see myself coming back on a normal day just for a meal to try out some of the other offerings at the Pub! It’s only about a 30 minute walk away

I have my eyes on the Fish and Chips, The Downtown Burger, and on that Fried Green Tomato Sandwich too.

Its a pretty decent pub to hang out in too as they have the beer and the sport on the TV screens, so basically everything that you might need to while an hour or so away 🙂