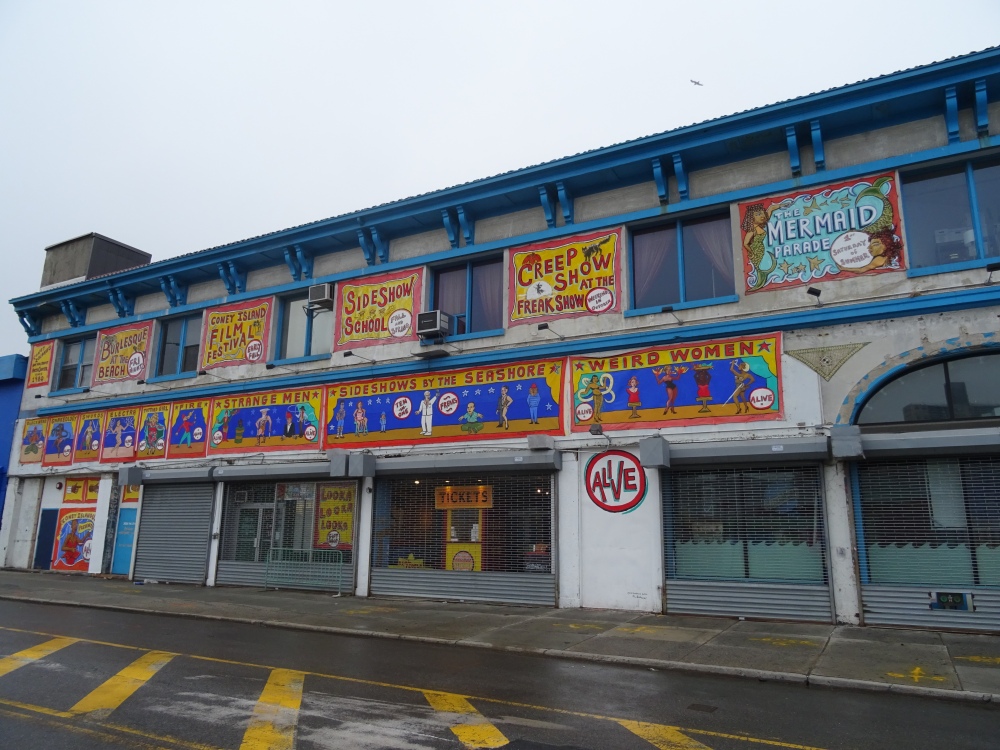 There really is something quite magical about Coney Island out of season. Even in the rain and drizzle I love riding the train over here from Manhattan just to take a stroll on the deserted board walk and of course to sample a hot dog or two from Nathan’s Famous.

It’s not that glamorous or jet set but it is all very real and I love the simple experience and to see how the area is faring each time I am lucky enough to be able to visit New York.

I think that this article from the New York Times from 2015: “Coney Island: The Cyclone! The Hot Dogs! The Art!” sums up nicely why many of us have a love affair with this part of New York

For me it always is an excuse to eat some carnival food and my got to spot of choice is a visit to Nathan’s original for a hot dog. This hasn’t been the first time I wrote about that either 🙂 Back in 2015 I posted “Nathan’s at Coney Island in Winter- Dogs are good any season!” on this blog, and in 2011 on my first blog The Chicago El Stop Food Hunt Project 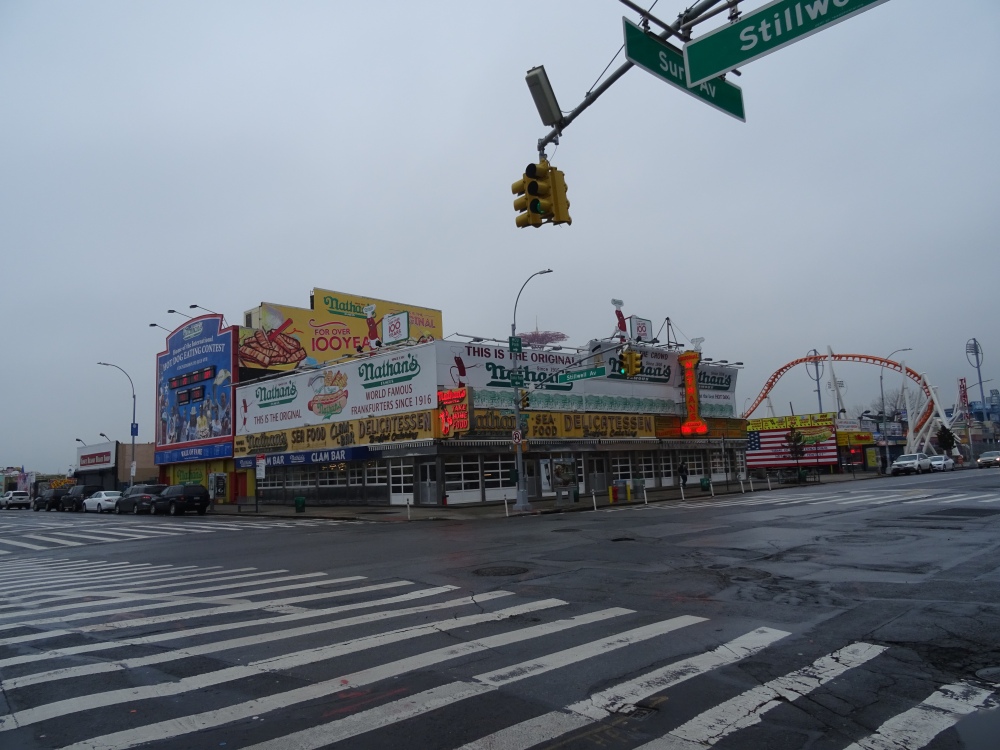 As you exit the train on the corner of Stillwell Avenue and Surf avenue across the street on the opposite corner sits the original Nathans. It never looks as big in the pictures, but in reality she takes up the whole corner and is the big dog on the street. 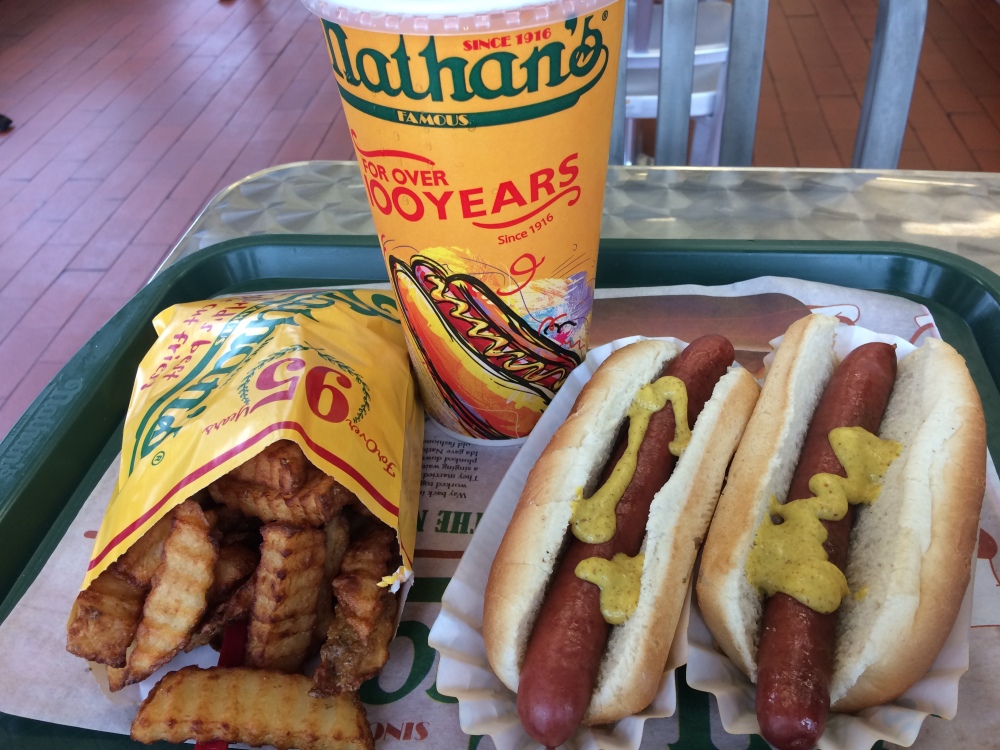 Before I took the stroll I really needed something to eat so I went straight over to Nathan’s and ordered up two hot dogs, some crinkle cut fries and a coke. It all seemed so familiar both in looks and in taste. The only difference is that they now have a new design on the packaging to celebrate having been open for over 100 years,

I will be honest, this was a bit of an attempt at a hangover cure. I ordered way too much food, on a good day I could have eaten this easily, but today I struggled to eat my way through the tray. The plain simple charred wieners in the soft potato buns topped with mustard were no problem. They did fill me right up though and I was only able to manage about a third of the fries.

The fries were an interesting affair as they looked a bit burnt or well fried, but they were actually still quite soft inside and were maybe a little soggy (in a good way). They were so hot and I was so hungry that I had to restrain myself as to not burn my mouth. My hangover though was defeating my hunger and even though I wanted to eat more my brain was resisting the signals between my mouth and my stomach, so I ended up leaving more than a few.

It set me up though for a stroll around the park and the boardwalk. 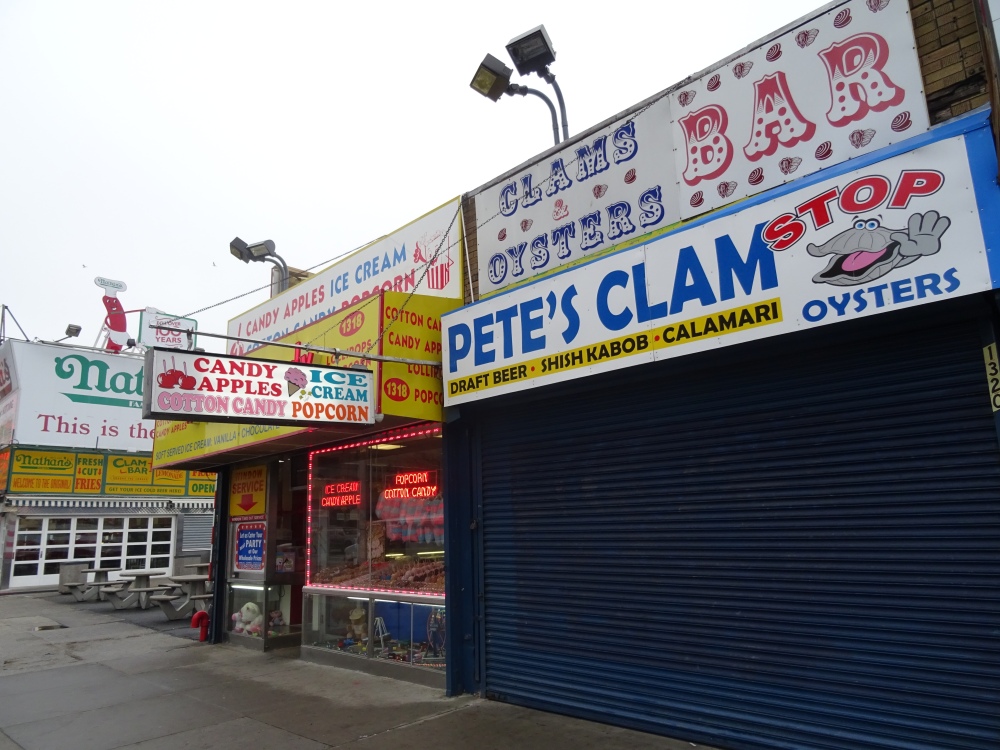 There really wasn’t much else apart from Nathan’s open, Pete’s Clam Stop probably does great trade when the park is open during the season, but this time of year it is all shuttered up and I like to think that Pete is off on some Caribbean beach fishing and spending his hard earned clam money.

I learned that the place and the Candy Apple store (Williams Candy) next door, which was open, were owned by one Peter Agrapides who has been working Coney Island for 6 decades. Maybe he has someone taking care of the place while he extends his rod over the pier? I really would like to hope so 🙂 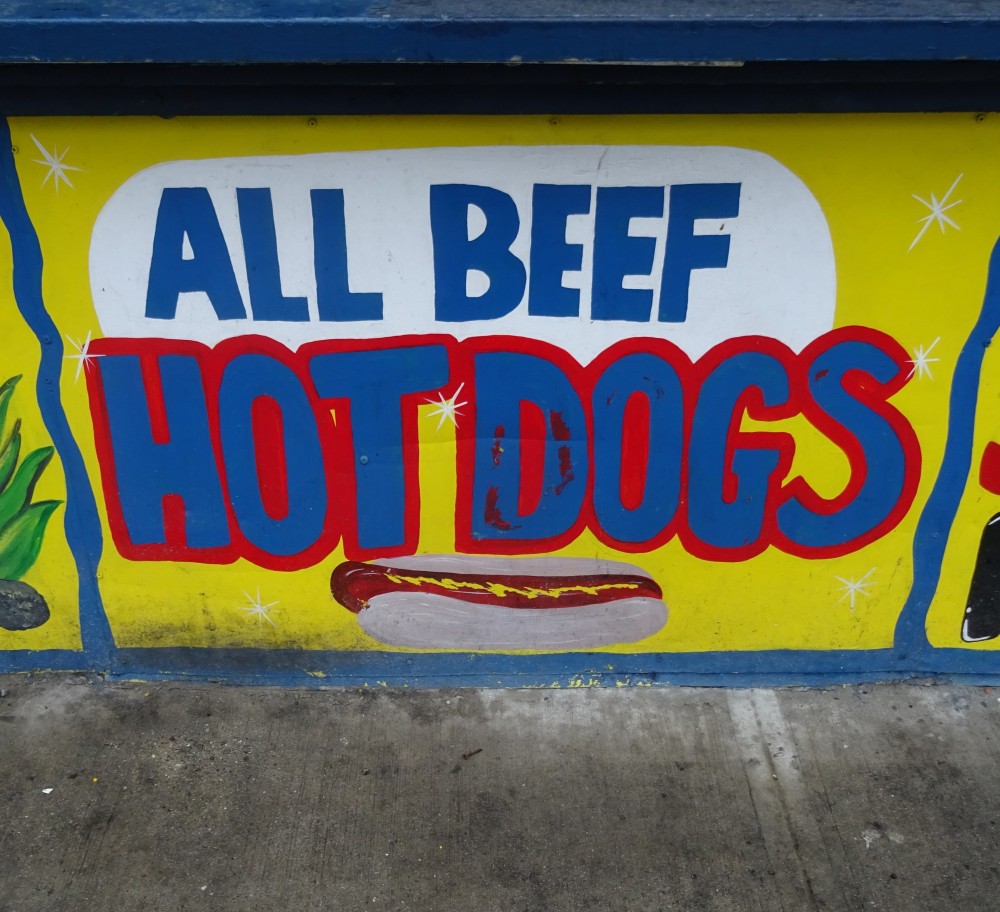 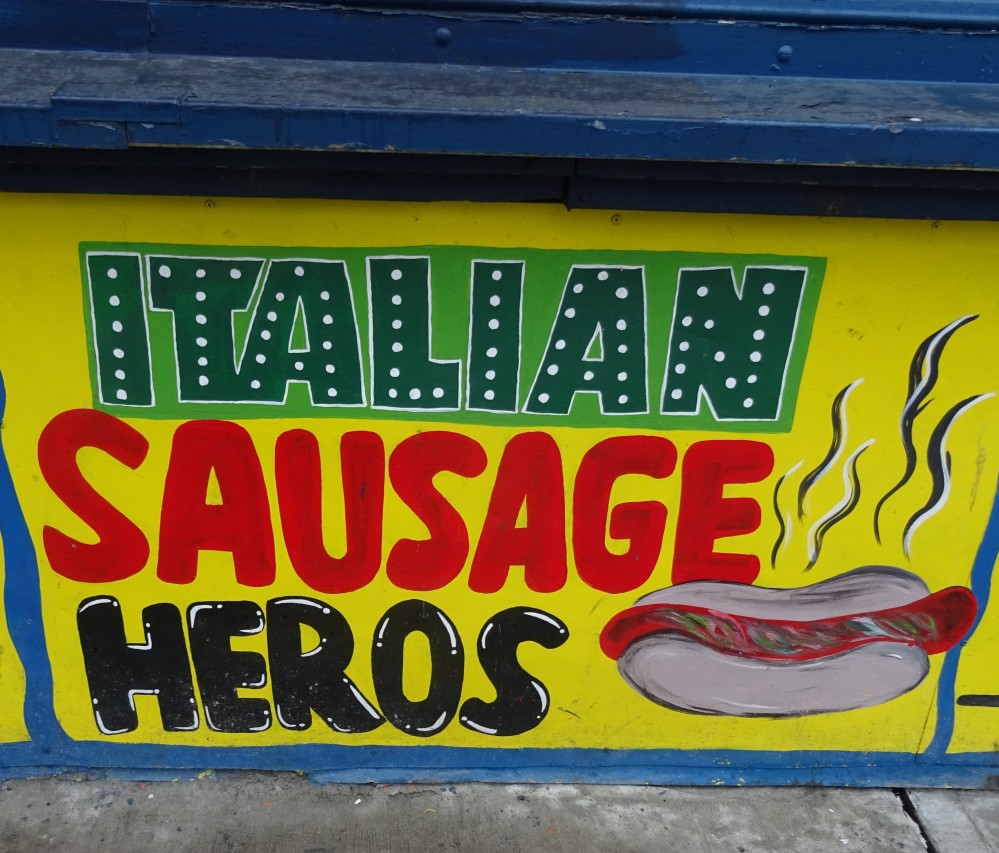 I loved these two hand painted signs on the side of the closed up stores. Even though I had just had a hot dog, I would really have found it hard to resist the temptation of an Italian Sausage Hero sub 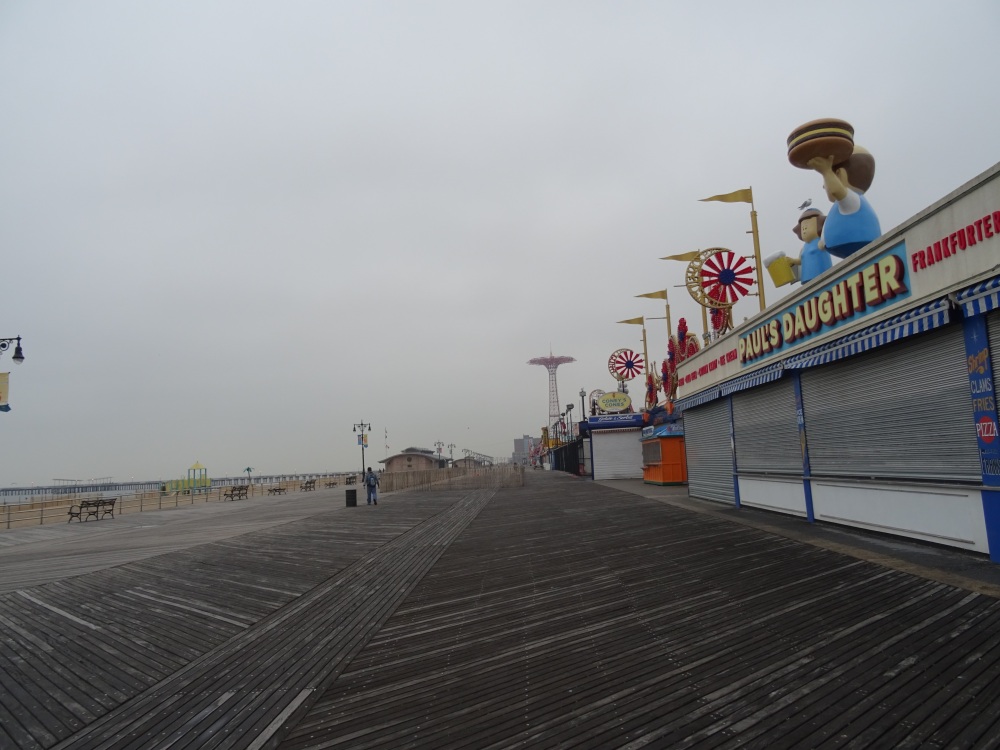 Out of season that boardwalks was empty and I almost had the whole place to myself. A few hardy joggers and tourists were my company as I strolled along in the misty rain. I think that for once there were more seagulls than people taking in the sea air 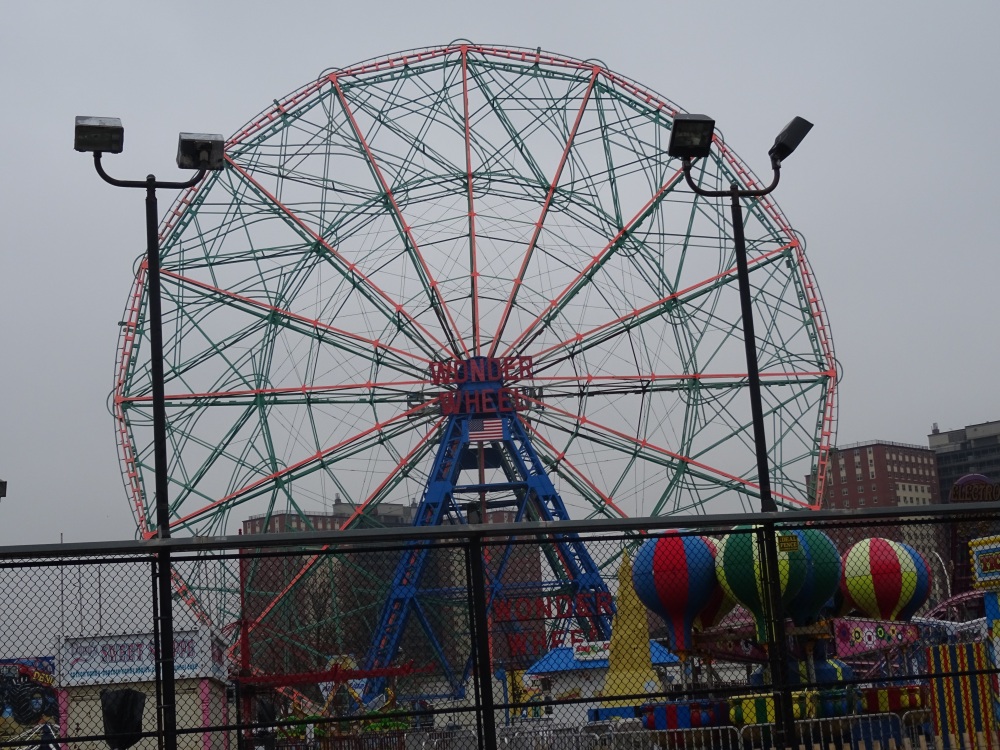 My Favorite thing to visit at Coney Island is the Wonder Wheel more often than not I find myself here out of season and that is a real shame as this old lady is usually caged up all forlorn without any company. The Wonder Wheel has been running since 1920 and I am happy that she is listed as a New York City Landmark so hopefully she is protected for many more than the 35 million riders for many years to come

I love seeing her spinning around in the summer time when the park is open, and I am somewhat ashamed to say that I have never taken a ride on the wheel. One day I must return in the season to make that right. 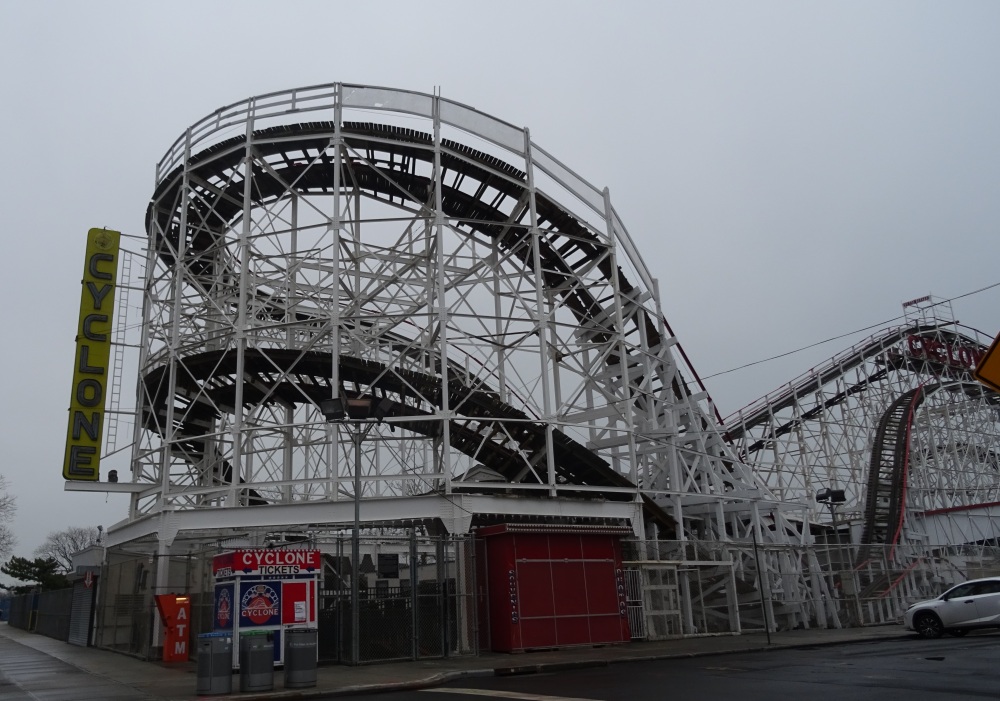 The Cyclone was looking a bit sad in the gloom. but at least it is still here! I like coming here when you can here it rattling along on its old wooden rails. It feels like the park is alive and you can somehow feel the history of the Coney Island in the atmosphere. 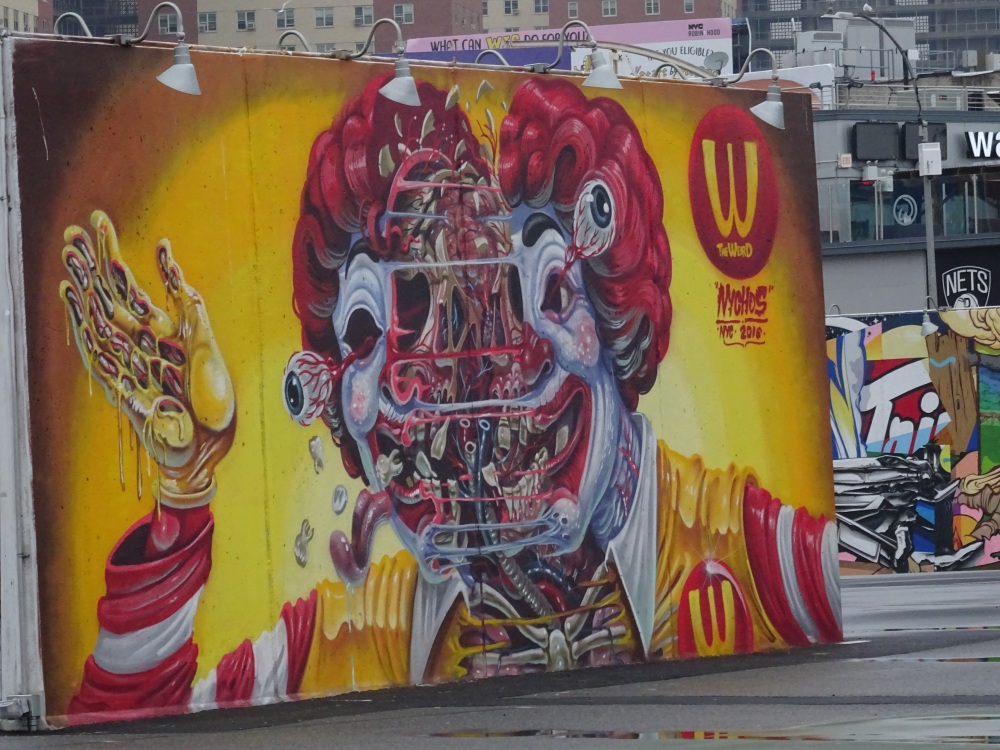 Whenever I come here there is always something new to see! On this visit I found the Coney Island Art project which has loads of street art, murals and many thought provoking items. I wondered what this particular mural was trying to say 🙂 put me right off my hamburgers for a bit I can tell you 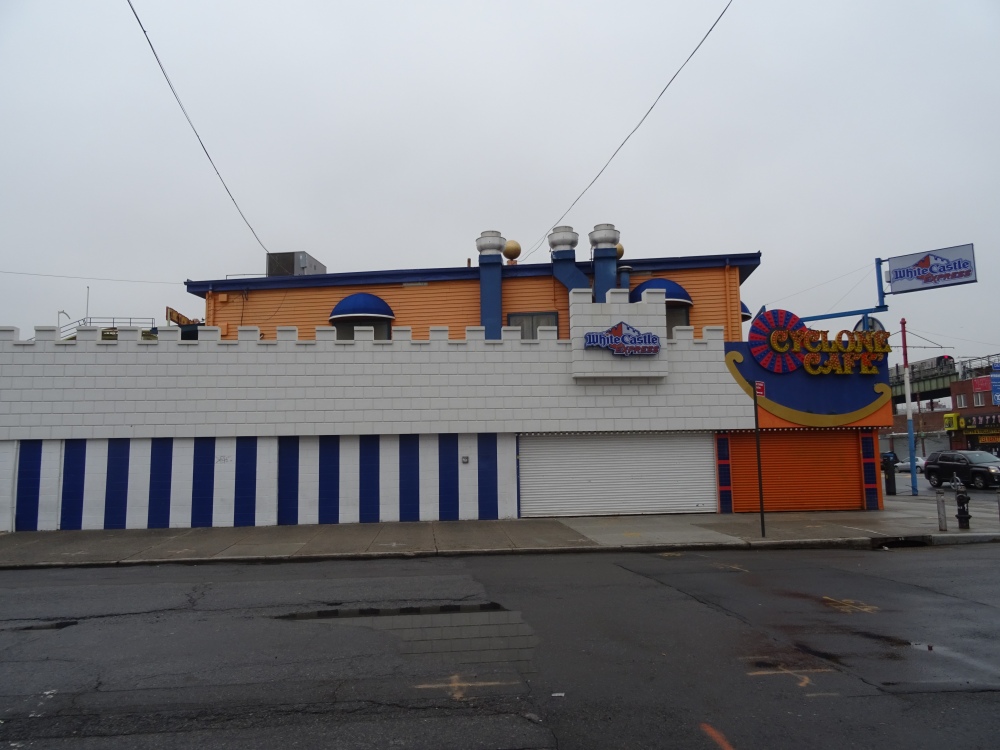 White Castle at Luna Park, on Surf Avenue was closed up for the off season, it doesn’t open up again until April. That was a bit of a shame, although not unexpected, as the place is an American Historical Classic and not just because I learned of it through the Beastie Boys in the 1980’s.

I have only been in once to the now closed restaurant on 8th Avenue in Manhattan where I tried a few of their sliders. My distant memory of those bites was not favorable, but I still do love their styling and the ‘idea of them’, so next time I visit the park in the season I am going to pop in to try them out again.

Well assuming that I have not already filled up on hot dogs! 🙂 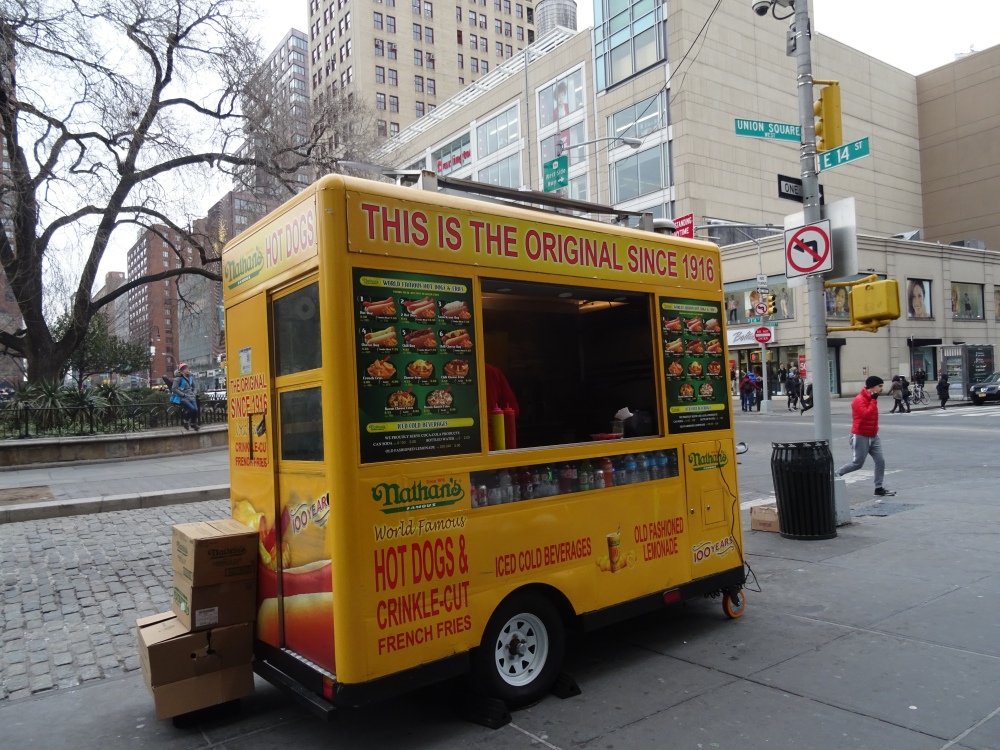 So why did I find myself at Coney Island? Well it all started when I had come across this Nathan’s Hot Dog street cart on 14th Street at Union Square.

It made me really want a hot dog and I thought well if you need a dog there is only one place to get one!

That was the main reason for my trip to Coney Island, such small things can trigger a MyFoodHunt Trip 🙂