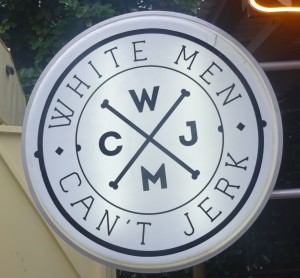 White Men Can’t Jerk were one of the Street Food Traders we headed to when we visited Street Feast at Hawker House over at Canada Water in London.

“We pride ourselves on bringing you bold flavour combinations and feel good vibes. Our food is a love of all things Caribbean, with a twist. Think Curried Mutton Shepherd’s Pie with a sweet potato mash topping, Red Stripe poached Fried Chicken Wings, and signature Jerk Chicken cooked on our custom made smoking grill, Tallulah”

This was described as “our tasty Jerk Chicken grilled on our own custom BBQ, Tallulah. Prime quality chicken marinated in our fine blend of Jerk paste containing a secret set of ingredients that’s guaranteed to put sunshine in your belly. Served with Vibes sauce, rice & peas, pineapple & mango salsa and Colemans ® Coleslaw.”

You really did get a pretty decent sized portion for your money and just got a fair amount of chicken too. I liked that each piece had a nice crusty charred piece of jerk coated chicken skin and as it was on the bone it was all still very moist.

The rice and peas was fair enough and there was quite a nice scattering of green bits of salad mixed into the plate. The salsa and the dipping sauces also complimented the whole boxful pretty well too. 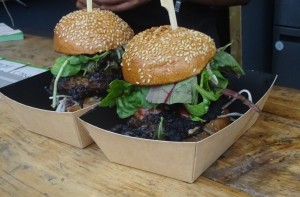 I saw a couple of their Jerk Chicken Burgers awaiting for their buyer on the counter and I have to say that they looked pretty decent sized and very tempting as well.

The menu on the WMCJ website described them as

“Jerk Chicken Burger – A sweet fluffy brioche bun stuffed with loads of our shredded Signature WMCJ Jerk Chicken slathered in our Vibes sauce with a little bit of fresh salad. Served with a little Pineapple & Mango Salsa and a big dollop of Colemans ® Coleslaw on the side.”

I might get one of those next time, but I read that they also have a Jerk Pulled Pork version and a Jerk Bean Burger version too. Both sound good!

I loved the name which I assume was based on the film “White Men Can’t Jump” with Woody Harrelson and Wesley Snipes. I know that is not a great leap of thought, but that film was from back in 1992 and I am not sure that half the punters lining up to get their hands of this excellent Street Food would have seen it 🙂

It was also fun to see that they had a basketball net alongside to play a few one on one’s while you waited for your food. Sadly though it was overrun with kids so I just stood back and felt sad that I could not play 😦

Check out what they are up to