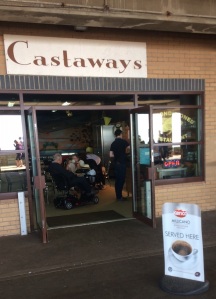 Castaways Fish and Chips in Hunstanton is located right next to the beach by the promenade and has a takeway window and an inside seating area.

It is not listed on the magical internet as the ‘best’ Fish and Chip shop in Hunstanton, but it was certainly a very friendly and relaxed little spot hidden away in plain sight on the boardwalk.

I had the Haddock and Chips with Mushy Peas and you really did get a great big plateful for your money. Now I am not going to try and say that this was the best plate of Fish and Chips that I ever had, but it was certainly one that was received quite gratefully.

I liked that it was cooked to order and I really didn’t mind waiting 10 mins or so for the Fish to come out of the fryer just for us. I felt special and was happy to know that it was freshly prepared.

The flesh of the fish was lovely and juicy, I was not that keen on the batter as the skin side really had little coverage so I felt I had not quite got the whole deal. I actually ended up leaving the skin which made me a little sad as that is where all the good nutrients hide 🙂

The chips were from new crop potatoes and so were a little white and insipid looking, but they were plentiful and I actually quite enjoyed them, salt and vinegar are marvellous tools as our intrepid sailors learnt years ago when making something a little more palatable.

The mushy peas were quite joyous, I love me some mushy peas. These were particularly welcoming, perhaps a little crunchy, but that is how I like them and they had really nice flavour too.

Castaways has a pretty reasonably priced menu if you fancy sitting down for your Fish and Chips by the seaside. It also caters for the fussy buggers amongst us offering up Battered Sausages and Chips, Pukka Pies and even a Deep Dish Lasagne (ooh it’s just like being in Italy) 🙂

Seriously though, it is not big and it’s not clever and it is not trying to be. This is the sort of place that the cartoon people from the old Victorian postcards would dine and you can see them here any day taking up one of the many tables.

The wise words of food or fool called ‘journeyadvocate’ or ‘tripadvisor’? told me that another place called “Fishers of Hunstanton” was number one in the town, my Mum and her friends who I trust a lot more told me that the fish was nice there but it was cold and they put mint in the peas! so we went to Castaways where they serve it properly:-)

Castaways is located at

The Pier Amusement Centre, The Green