OK so I admit that I had never heard of Wahlburgers! How did this happen, I must have left the country for a brief moment (not my fault it was a visa thing) and I totally missed that reality TV show that was aired from 2014.

Now I did know who Mark Wahlberg was, and not just from watching that film Ted! I mean he was Luke Skywalker wasn’t he 🙂 just kidding guys!

Anyway forget everything, forget the actor, forget my ability to google “Wahlburgers“ and imagine that I ‘just took a stroll from my Hotel, the Commonwealth, at Fenway and found a ‘random burger joint’, cos that was the goddam truth 🙂 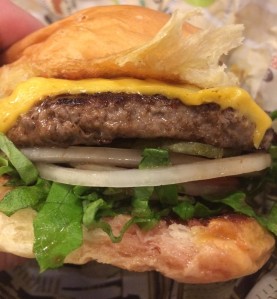 So I found myself sitting up in the window staring down “The Our burger” one of their House Burgers. The menu describes this as a “1/3lb burger, lettuce, tomato, onion, American ‘government’ cheese, Paul’s signature Wahl sauce & HOUSEMADE pickles”

It kind of looked to be a very simple affair, yet it was a most appealing burger profile as I sat clutching in my hand before I took that first crucial bite.

I chomped down and found myself in a quandary, I mean this is a great burger, but it is a kind of faux assed celebrity burger as well I suppose. (Thought to self: “well you did like Ted, and kind of Ted2?, oh and ‘Invincible’! “) OK breathe, let that go  and Just think about the burger! 🙂

I liked that it was kind of an upside down design. All of the green leafy stuff and the cold salad bits is on the bottom bun layer underneath the meat pattie. The hot stuff like the melted cheese is on the upper layer. This is a really great design of a burger I was thinking to myself as I scoffed this baby down! 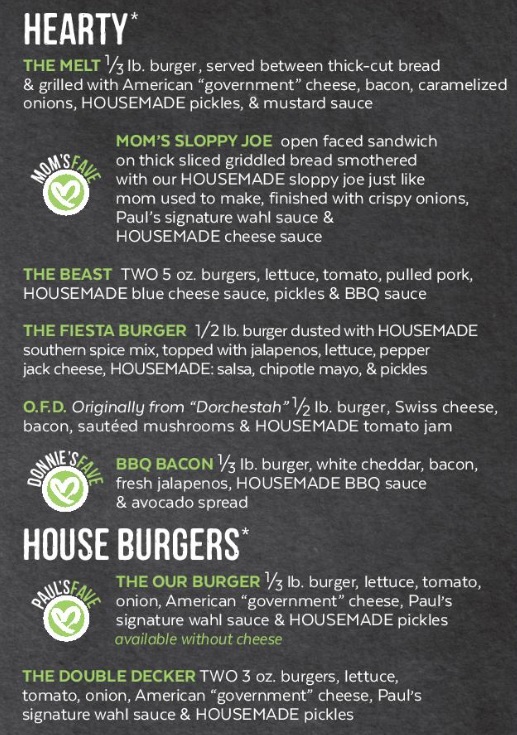 I quite liked the sound of a lot of the items on Wahlburger’s Menu. Apart from “The Our Burger” that I chose, I was also quite keen on “The Double Decker” which sounded to be basically the same thing only with two Burger Patties, so hopefully twice as much joy in a bun.

I nearly had The Melt as that sounded like a great big grilled cheese sandwich with a Burger! Lovely stuff 🙂 The Menu listed it as “THE MELT, 1/3lb Burger, served between thick-cut bread & grilled with American “government” cheese, bacon, caramelised onions, housemade pickles, & mustard sauce” Maybe another day ?:-)

This particular Wahlburgers is located pretty close to Fenway Park at

I quite like the Wahlburger burger, it was kind of like in the Shake Shack kind of burger, Quite a lot better than your average burger joint.

My mate laughed at me, just because of the whole Mark Wahlburg thing, but I love a good celebrity spot and one that sells burgers is even further inside my wheelhouse.