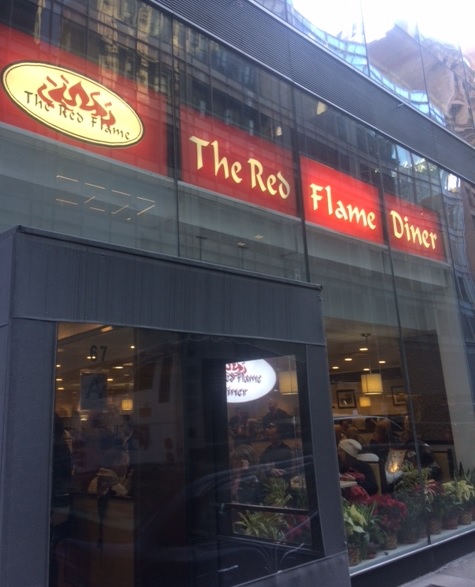 The Red Flame Diner on W 44th Street in New York is one of your classic old school diners.

Described by Google as your “Basic diner serving sandwiches, salads & other straightforward fare from sunup to midnight.”

Their own website says “Enjoy real, home-style and gourmet food at great prices”

It was pretty near to our hotel just a few blocks from Bryant Park, the Rockefeller, and Times Square so was fairly handy to grab some breakfast before we headed out for the day

They were serving diner food, the place was fairly rammed, and the ladies on the counter smiled at us when we looked in so we figured we would give it a whirl

We were here for some breakfast, and when in New York or any where really in the states I usually just head straight to the “Eggs” section of the menu.

That always seems to be the best option, you usually get toast
as well as breakfast potatoes, and a drink all within the same price.

Eggs with Bacon, Eggs with Sausage

Sometimes when we have asked for both we have been given that look of incredulous followed by an exclamation of ‘that’s two proteins’. So now we have learnt to do our own thing 🙂

If I am honest I would have to say that this tasted a lot better than it looks. I like the crispy bacon but it was more the sort of bacon strips that would be best laid inside a burger bun than on a fry up. You have to pick them up really to eat as they were quite crisp.

I liked the fried eggs and I ate them on some slices of white wheat toast (not in the picture). The sausages were actually more like cheap English bangers and I had half expected a burger type sausage patty to appear on the plate.

The hash potatoes needed a fair bit of ketchup to make them interesting and I would probably been just as happy if they were not on the plate.

Overall it was a fairly filling plate of breakfast and it kept us going for most of the day, well until lunchtime anyway 🙂

The Red Flame Diner is located at on 44th St just off Times Square & a short walk from both Grand Central Station & the Theatre District.